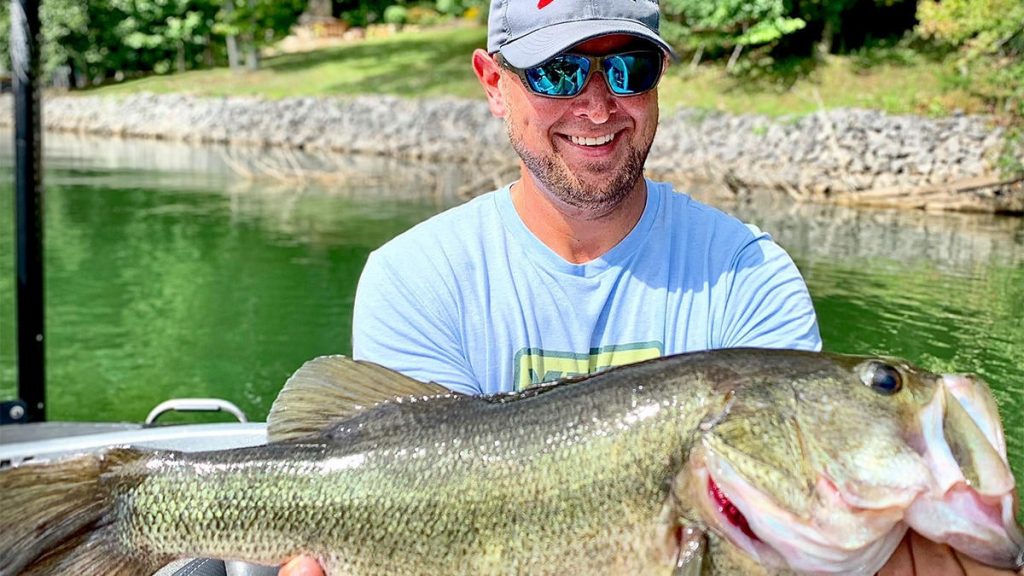 Another option for branching out with the drop shot is keeping it handy for picking off bass in just a few feet of water. When fish are up shallow, they can often be wary of larger, heavier baits especially if the water and sky conditions are calm and clear. No matter if they’re up cruising, spawning or patrolling a bluegill bed, wacky rigging a 4-inch stick worm on a 3/16-ounce weight is a way to catch bass that don’t seem to respond to anything else.

In most cases, I’ll keep a shallow-water drop shot rigged on a spinning rod with an 8- or 10-pound test fluorocarbon leader simply for the accuracy and ability to make as subtle of a presentation as possible. I’ll also typically keep the distance between the weight and hook a little shorter than I would for deeper water. In most cases I’ll make it 6 to 10 inches so the bait settles in as natural as possible, even in just a foot or two of water.

The 6-pound largemouth in this picture was caught on a 6-inch drop shot worm from Z-Man last summer called the Long ShotZ. I had it rigged on a light-action rod with 6-pound test for fishing deep-water brush piles for spotted bass earlier in the day on a client trip. After working a shallow area throughly with topwater lures and jigs, we were both left with the unexplainable feeling to which all fishermen can relate.

“There has to be some fish up there.”

One cast after turning the boat around to revisit the area resulted in a heck of a fight on a light-action setup. But perhaps more importantly, it opened our eyes that day that a different approach can change the outcome of a day on the water.