For nearly three decades, I had managed to stay away from the emergency room. Throughout my millions of casts and hundreds of close calls, I had yet to hook myself so deeply that it required serious medical attention.

I got a wild hair this past week and decided to change that; I hooked myself pretty darn badly. While attempting to free my crankbait from a submerged burlap sack in rough water, my hand slipped off the lure and sent two hooks into my handâ€”one into my thumb and the other into my middle finger. Both hooks were rubbing against the bone and a 40-pound waterlogged bag was hanging from my fingers while my boat bounced in the waves.

No line trick was going to work on this one. I was in a pretty nasty pickle, so I had to pick up shop and drive straight to the ER. The worst thing is, the fish were biting like sharks.

Because I’ve been lucky avoiding such accidents, I had never thought to keep any tools or supplies in my boat in the event myself or one of my passengers were hooked deeply. So I didn’t have anything to help me. Admittedly, I was unprepared.

The day afer my conundrum, I put together an “Oh, Crap Box” that’s specifically intended for deep puncture wounds from fishing hooks. It cost me about $30 and I think it’s something everyone should have when they’re fishing. 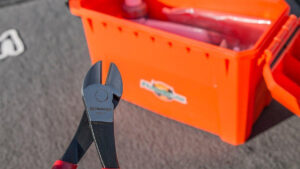 I would have kissed Miley Cyrus square on the mouth for a set of side cutters that day. My thumb and middle finger were pinned together across my palm, so I had no use of my left hand. I had to make a 15-minute run back to the ramp, load my boat on the trailer, park it at my house, remove my electronics and lock everything up before I went to the hospitalâ€”all with one hand.

But the real issue was the pain during the ride back to the ramp. There was a pretty heavy chop on the water and even though I was trying to hold my hand still, my eyes would cross every time I hit a wave. If my middle finger moved even a millimeter, it would pull the hook into a nerve of my left thumb and vice versa.

If I could have separated my fingers, it would have been much less painful and less dangerous driving my boat and truck with one hand.

A good set of side cutters would have allowed me to cut the hook and free my fingers. They’re not cheap, but when you’re in a similar situation to mine, you’d pay $500 for a pair of ’em. I paid about $20 for mine and they cut even heavy-gauge hooks with ease.

I was raised with the “rub some dirt on it” mentality, so I’ve never kept antiseptic in my boat. But seeing how concerned the emergency room nurses and doctors were about infection changed my mind. Think about all the bacteria and junk that worked its way into my body while my hand was bleeding and dangling in the water. I know several people who have had serious infections from fish hook woundsâ€”one even ended up in the hospital for several days.

I know we all think we’re tough. But just get some dang antiseptic and put your pride aside.

I purchased both iodine and hydrogen peroxide. I’m not a doctorâ€”just a dumb fishermanâ€”so I don’t really know the difference between the two, nor do I really care. They both kill germs, so I’ll probably dump a bunch of both on myself the next time I get hooked. It can’t hurt. 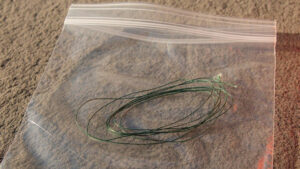 “The line trick” is a popular hook removal technique used by anglers (click here to watch the video). Due to the severity and awkward location of my injury, it wouldn’t have helped me this past week. But I do use the line trick a few times each year for simpler hook accidents.

Braided line is a necessity with this method, but the last thing I want to do is dig through my boat, looking for braided line with a hook buried in my body. So I simply placed a pre-cut, 3-foot strand of 65-pound braid in a sandwich bag. It’s ready whenever I need it. 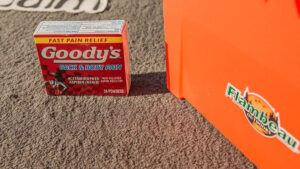 To be totally honest, hooking yourself doesn’t really hurt too bad at first. But after that hook sits inside of your skin for about 30 minutes and your adrenaline wears off, the throbbing begins. If you have to go to the emergency room, you’ll be hurting by the time you get there. So keep a couple ibuprofin in your “Oh, Crap Box”.

If you’re able to use the line trick and keep fishing, you’re still probably going to get sore after a few hours. So either way, it won’t hurt to take a few so you can keep concentrating on fishing.

It takes a lot to get me off the water. Unless two of my fingers are pinned together, I’m going to keep fishing. But I don’t want blood dripping on my carpet or fish slime getting in an open wound. So I got some stuff to help keep me fishing after I get hooked.

I bought some finger bandagesâ€”I figured I’m most likely to hook my finger before anything elseâ€”and some waterproof tape and gauze pads. Actually, I took the gauze pads from the hospital room. But whatever. 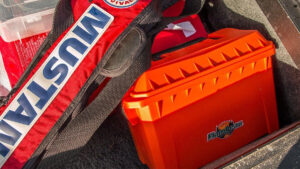 I didn’t use just any ol’ container for my “Oh, Crap Box”; I went with a Flambeau Dry Marine Box. I’ve used a lot of Flambeau’s waterproof products in the past and I know they work. I also know that soggy bandages and rusty side cutters won’t do me a bit of good when I get a hook lodged in my skin.

This box is small enough to fit in any compartment in my boat, but just large enough for a beefy set of side cutters. It’s also bright orange, so in case of any emergency, I can tell my co-angler to “grab the orange box” instead of waiting for them to dig through my entire boat.

Even though you’re tough, I suggest putting together your own “Oh, Crap Box” sometime soon. It’s an inexpensive way to deal with any unfortunate hook accidents while you’re on the water. I didn’t follow my own advice, so learn from my pain.

Have you ever hooked yourself like this? Do you have photos or a video? Share them with us here: Tell us about your hook injuries.