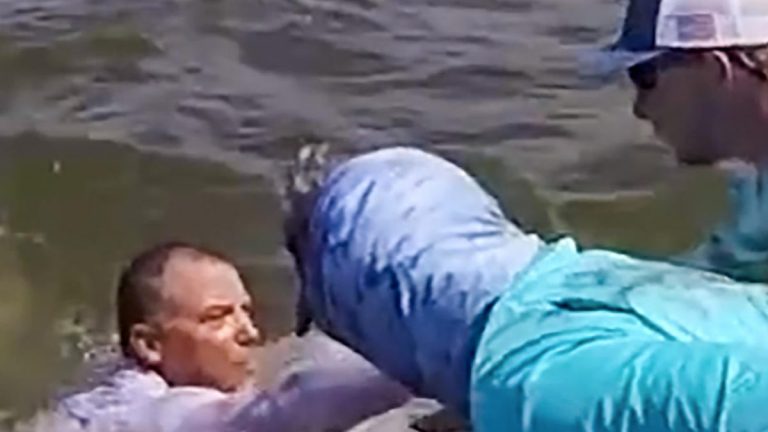 Although our sole focus is providing our readers with the most helpful and educational fishing content on the internet, we also get a kick out of viral news and videos that makes its rounds on social media. Whether we’re hanging out in the evenings or on an airplane to a new lake, we’re constantly searching for the coolest fishing content in the world.

2019 offered a lot of viral fishing content that got people talking. Some of it was scary and some of it was downright funny. But either way, we wanted to bring it all to your phones and computers.

Here is a list of the most viral fishing posts of this year. Please enjoy and know that we sincerely appreciate your friendship, viewership and readership each and every day. Here’s to a great 2020!

After being charged with fraud in a fishing tournament (link to original story) and possession of marijuana (less than two ounces), Brent Taylor was sentenced to jail time and restitution of nearly $3,000. His fishing license has also been suspended for a year and he has been banish from fishing in tournaments. The court decision comes after an extensive investigation after suspected fishing tournament fraud on Decker Lake in Texas. The amount of jail time has not yet been disclosed. 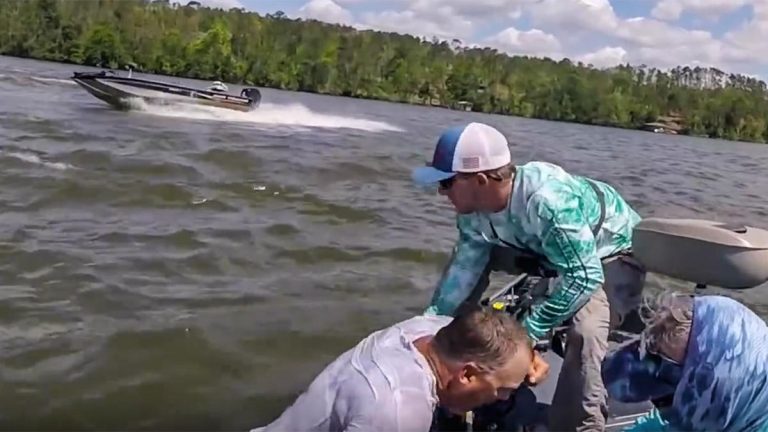 User ReelJedi was fishing on Lake Seminole and his  cameras caught an angler being ejected from a passing boat. The man was not wearing a life jacket or kill switch and was extremely lucky to be rescued without any major injury. This video serves as a prime example of why you should always wear your PFD and kill switch. This could have turned out much worse.

This is one of the craziest confrontations we’ve seen involving anglers and two men in a jon boat trying to force the bass fishermen out of a marina with their boat.

We don’t have much of a back story on this video, but it’s pretty darn intense and we wanted to show everyone what not to do in a bass boat. They have to be really tricked out do this kind of speed and as you can imagine, they’re impossible to control at this speed as well. You can see that once the boat starts chine walking, the operator immediately loses control causing the bow to hook and the occupants to be ejected.

This is one of the scariest boating videos (and scenarios) imaginable. Michael Broussard was fishing with his father on Toledo Bend when the accident occurred. The driver took a turn to sharp and it looks like the bow hooked before both occupants were ejected. That’s not all though; Broussard wasn’t wearing his kill switch and the boat stayed in gear after the anglers went overboard. It seems as if some nearby anglers saw the incident and Broussard boarded another boat and chased down his runaway boat. He jumped from one boat to another to take his boat out of gear. 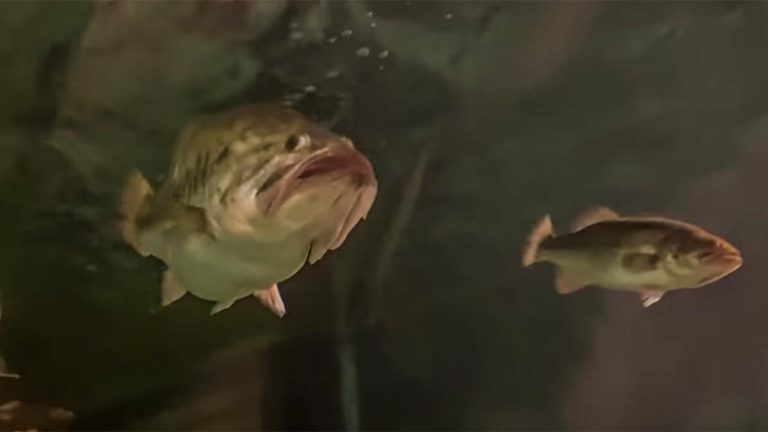 Big baits get big bites when it comes to bass fishing-you’ve probably heard it hundreds of times by now. But to see a giant bass attack another keeper-sized bass on video really drives the point home! 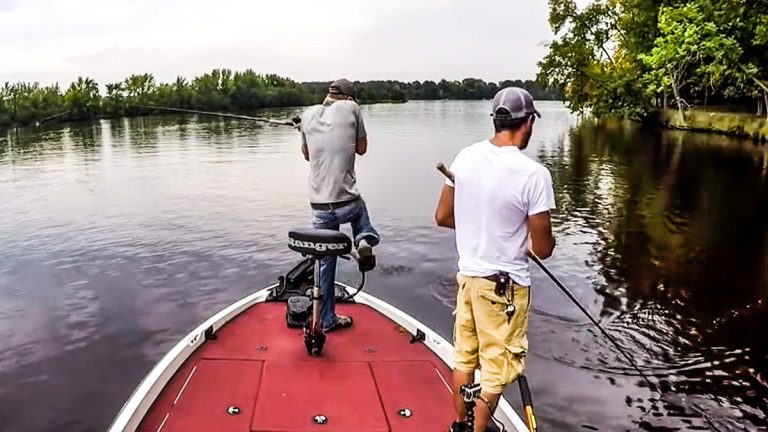 Two anglers were musky fishing on a remote-looking lake when they got the scare of their lives. Someone nearby seemed to be target shooting with a .22 rifle when a bullet hit the front of the anglers’ boat. It’s unclear whether or not it was due to ricochet, but either way, it was certainly poor judgement by the shooter. The bullet came within inches of hitting the angler in the front of the boat. 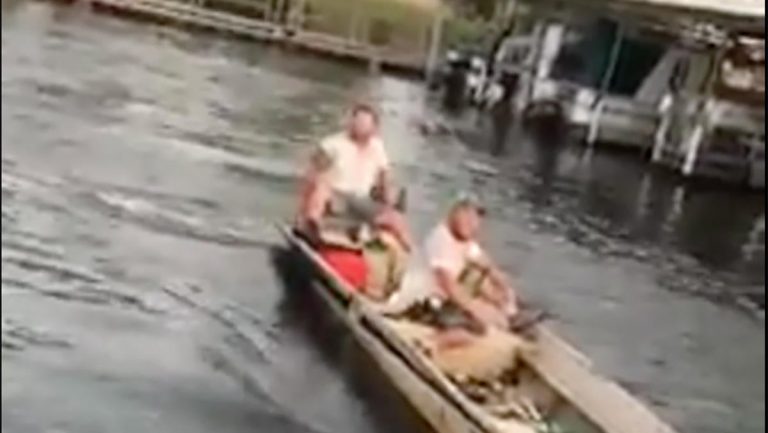 According to Oklahoma Highway Patrol officials, Austin Potts of Arkansas has been charged with two counts of felony Assault and Battery with a Dangerous Weapon, one count Acts Resulting in Gross Injury, one count Failure to Possess Current Registration on a Vessel and one count Failure to Have Required Equipment on a Vessel after an altercation with two anglers fishing around the Sunset Cove Marina on Ft. Cobb Lake in Oklahoma.

Woman Hurls Kitchen Pot at Boyfriend for Fishing Too Much 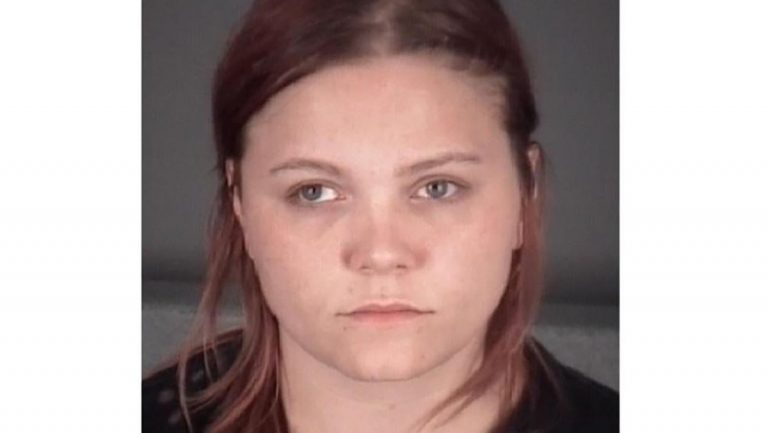 A Florida woman, 25-year-old Katie Lou Gottlich, has been charged with misdemeanor domestic battery after allegedly throwing a kitchen pot at her boyfriend’s head on Wednesday. Her reasoning? He had been fishing too much and not doing enough around the house for their young child.

Young AJ Campione and his family were looking for excitement on their recent family camping trip to Fox Lake in Wisconsin, but they certainly didn’t expect this to happen. As the boy was in 10 feet of water putting on his new water skies, something toothy bit down on his foot.