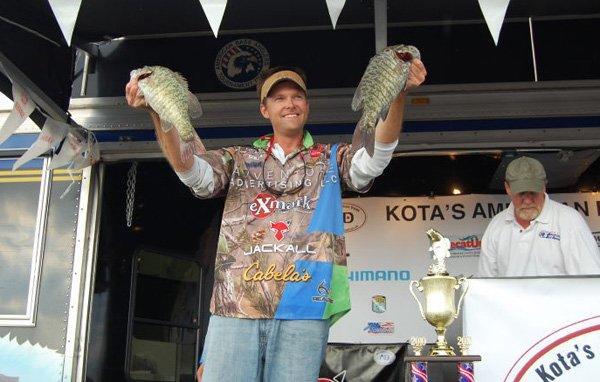 Those of us in the fishing industry have always said that in this business, â€œeveryone knows everybody.â€ It’s true that once you make a friend in the fishing industry, you’re always friends. So it is with Jason Meninger and Kota Kiriyama. Meninger was director of Ad Sales at Bass Times and Kiriyama was handling all the marketing for Lucky Craft at the time, and the two, as is the case with most in the industry, struck up a friendship over fishing.

Fast forward from the 1990s to 2010, and Kota is realizing a dream, namely his  Kota’s American Dream bass fishing tournament on Wheeler Lake in Alabama. Meanwhile Meninger is between his rookie and sophmore years on the FLW Tour. When Meninger first got wind of the tournament, however, he called up Kiriyama and put him on notice that he’d be there no matter where he had it.

â€œI’ve always liked Wheeler Lake,â€ Meninger said. â€œI’ve only fished it one other time during a Series event, but it’s a Tennessee River fishery.  I love to fish rivers like this one.â€

Unfortunately his work keeps him busy and on the road a lot, so because of work commitments, he literally got to Wheeler on Friday, the afternoon before the tournament started and only had about 3 hours of practice time to put together something for the two-day event.

â€œI drove around mostly looking at the secondary back channel off the main river,â€ Meninger said. â€œThe water on the main lake was fairly clear, but I found some greenish-brown colored water back there that had a little more stain to it. That looked good to me for cranking.â€

As he wandered around down that back channel as he called it, he came across a pocket where the shad were flipping and some sizable bass were busting on the shad in the mouth of the bay. He went through a plethora of lures before finally catching a solid 3-pound keeper on a Jackall DD Cherry in chartreuse shad.

Then the rest of the time he spent working that back channel and driving around and looking at other pockets.

The morning of day one, Meninger raced to his lucky pocket and started working it with a buzzbait. After not a single blow up or fish surfacing on the shad, he switched to the Jackall SK-Pop and caught two quick keepers.  But he hadn’t had any of those big bites and no fish were schooling. So he started working up the channel and other pockets with the  DD Cherry.  He finished out his limit late in the afternoon culling out several small fish with better quality bass on the popper.

After day one was over, FLW Tour pro Scott Canterbury was leading with nearly 17 pounds including an kicker weighing more than 8 pounds.

â€œScott had pretty good weight, but if you take away that 8-pounder, he basically had some two pounders,â€ Meninger said. â€œSo I knew I had a chance at that point.â€

On the second day, Meninger went back to his pocket and had 9 pounds pretty quick. After that he spent the rest of the day trying to cull up to better weight with the popper and crankbait combo.

â€œI lost a few key fish because I was fishing by myself and trying to net them on those topwaters by myself; I ended up losing a few.â€

Fortunately for him, it didn’t matter as Canterbury also struggled to boat the right fish on day two. Meninger took home the title and more importantly the unique opportunity to fish with his friend in Japan.

â€œI’m really excited about fishing with Kota on Lake Biwa as well as the whole cultural experience over there,â€ he said. â€œI’ve always wanted to go and now I get to have a Japanese tour guide and an excellent bass fishermen show me everything over there.

â€œThe tournament was unique and extremely well run. Kota had lots of giveaways so folks that didn’t win any money still got to leave with some great prizes. Not winning money at an event like this didn’t matter to me because this is a once in a lifetime opportunity to visit the Jackall plant and see where a lot of new innovations in fishing are born.â€

This was Meninger’s first year as a pro on the FLW Tour and he qualified for the Forrest Wood Cup championship on his home lake where he finished ninth. He credits what he’s learned about practicing and the mental side of fishing for the victory.

â€œI’m a pretty versatile angler, but it’s so eye-opening to see first hand how guys attack lakes and figure out the patterns,â€ Meninger said. â€œLuke Clausen and Andy Morgan really took me under their wing this year and helped me understand how to mentally prepare for practice and how to approach the lakes. That really helped me more than anything. I’m pretty good at fishing drop shots and deep in clear lakes since I live on Lanier. But I really prefer fishing river systems. I just love shallow cranking and feel if there is a shallow crankbait bite, I can win.â€