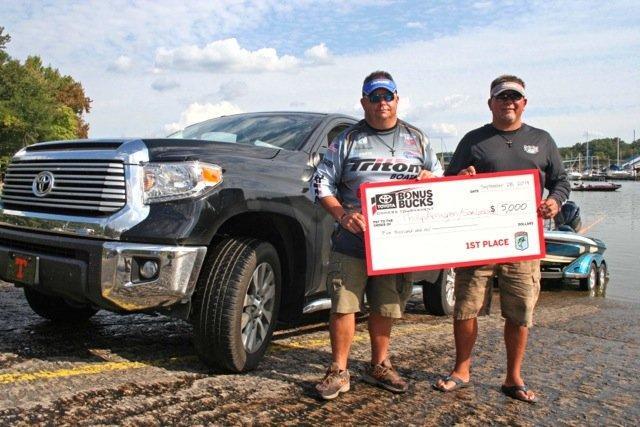 Tournament Director Chris Bowes knows who the top anglers are in each region where B.A.S.S. conducts tournaments. So no surprise, a moment after Bowes called Boat No. 106 from his microphone at a dock at Paris Landing on Sunday morning, he turned his head and whispered, “that’s Sam Lashlee, he’ll be tough to beat today.”

Bowes was right. Lashlee and partner Phillip Arrington dominated the 3rd Annual Toyota Bonus Bucks Owners tournament with a winning weight of 24 pounds, 15 ounces. The no entry fee made the $5,000 first-place pay day even sweeter.

But what neither Bowes nor anybody else might have guessed is that Lashlee and Arrington would use a Strike King Sexy Dawg topwater nearly all day on a sunny West Tennessee Sunday to get the job done.

“It’s been really tough on this lake lately, but you’ll catch a day now and then, when they’ll really bite, and today was one of those days,” said, Lashlee, age 53, who says he’s been fishing Kentucky Lake since age 2 when his dad used fishing as a babysitting destination.

“Sam leaves a hole every now and then,” joked Arrington of his partner’s prowess. “He told me to cast my Sexy Dawg to a certain spot, and promised I’d catch one. I started retrieving it and joked with Sam a bass could bite any second, and sure enough, a big one did.”

Much like accepting Lashlee’s wisdom on where to cast his Sexy Dawg, Arrington also listened to Lashlee on what brand of truck to buy. “I test drove them all, Ford, Dodge, and Chevy, but Sam talked me into buying a Toyota,” admitted Arrington. “That Tundra is a pullin’ machine.”

“This was one of the most well run tournaments I’ve ever fished, and I’ve fished a bunch of them,” Lashlee said. “Everything Toyota did was first class, and B.A.S.S. did a great job of taking care of the fish.

“Lastly, I hope it’s alright to say this, I want to thank my Lord and Savior, Jesus Christ. I should have been in church today, and I plan to give a big portion of the winning check to my church.”

Lashlee also shared a large Carhartt prize pack with Arrington for their win.

Lashlee and Arrington weren’t the only winners. The Toyota Bonus Bucks tournament had cash payouts to the top 30 teams ranging from $2,500- $150. Additionally, Chester Merriman of Dickson, Tenn. finished in 15th place and won a $1,000 Bass Pro Shops Gift Card. Bruce Whitmire, John Tutor and Craig Crommett all finished outside paid places, but were awarded $500 each through a random drawing.

Ironically, Crommett also cashed-in on a Bass Pro Shops Gift Card at the Owner’s banquet last night for driving more miles than any other Bonus Bucks member that attended the third annual event. He covered 1,400 miles in his Tundra to get to Kentucky Lake from his home state of Maine. Crommett wasn’t the only angler to add miles to their Toyota’s odometer. Bonus Bucks anglers from all over America traveled from states such as Iowa, Florida, Delaware and Wisconsin to Kentucky Lake to participate in the no entry fee event. Knowing that indeed, it pays to drive a Toyota.