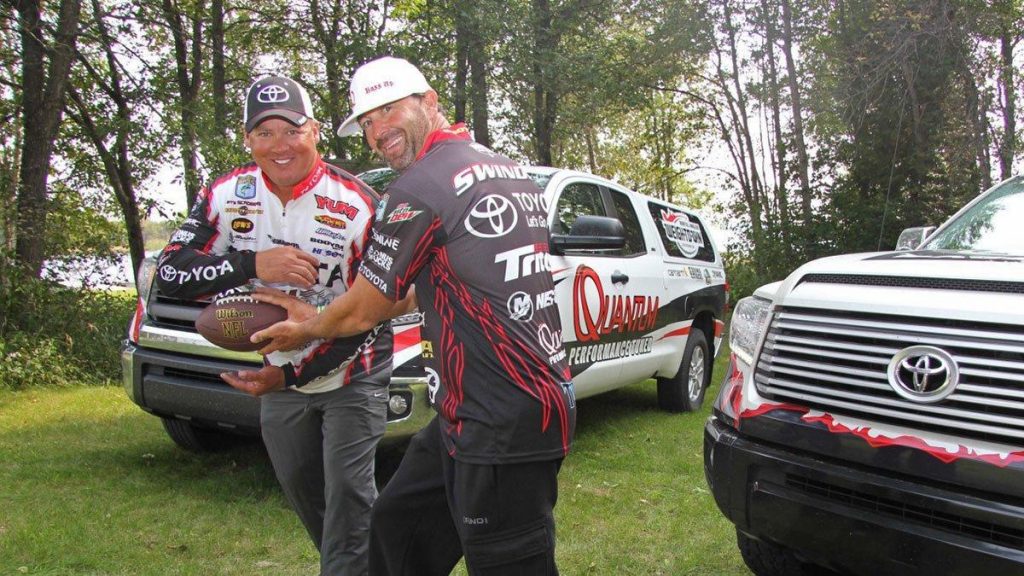 From high school to the NFL, every successful football program relies on a staff of coaches that spend an exorbitant number of hours developing a weekly game plan.

Pro anglers like Terry Scroggins and Gerald Swindle work extreme hours preparing to compete too. But unlike football, they are a team of just one. â€œBig Showâ€ and â€œG Manâ€ graciously agreed to share the game planning techniques that have led to a combined $4 million in winnings and 22 Bassmaster Classic appearances between them.

â€œIn practice, the single biggest thing I want to accomplish is to learn what the lake has to offer,â€ Swindle said. â€œI simply want to know what the water clarity looks like in one part of the lake versus another, or to drop a waypoint where I see an isolated laydown, or maybe a dock that’s covered in brushpiles, or a patch of submerged vegetation perfectly situated to hold a limit of bass.â€

Practice is truly about acquiring as much knowledge as possible of whatever waterway Scroggins and Swindle are preparing to compete onâ€”not running up the score on the number of fish they can catch before derby day begins.

While weekend competitors are often of the mindset that finding the exact way to score in practice will surely translate directly to touchdowns on tournament day, Scroggins and Swindle can’t stress enough that it rarely turns out like that.

â€œI’d say 50 percent of the time practice actually relates to how I catch them in the tournament,â€ Scroggins said.

His roommate Swindle is even more reluctant to credit practice for revealing the exact manner to catch them on tournament day.

â€œNo more than 25 percent of the time do things go exactly how you thought they would based on practice,â€ Swindle said.

Based on those stingy percentages, Scroggins and Swindle emphasize the importance of finding as many potentially prosperous options as possible in practice, knowing full well that only a very small number of areas or spots will yield a keeper bass once competition begins.

â€œIn a great practice I may find 15 areas where I think I can catch a bass on tournament day,â€ Swindle said. â€œAnd you better have close to 15 because somebody else is probably gonna find half of those same 15, then a couple more will be wrecked by a change in weather or water conditions, so now you’re down about five areas you still have left to rely on during the tournament.â€

Today’s electronics are also an invaluable tool that expedites the search for more and more possibly productive locations during practice.

â€œIf I get two good bites on a spot in practice, I’ll save it as a waypoint, and with the detail that shows up via sonar on the Humminbird Onix 8 and 10 units, I can look over the spot in detail pretty quick to get a feel for how many bass are down there without setting the hook on more than one or two of â€˜emâ€”and then I’m gone to find another spot,â€ Scroggins said.

Perhaps the one point Scroggins and Swindle tried hardest to emphasize during the development of this story is that the biggest thing separating Bassmaster Elite Series pros from local tournament anglers is their mental approach to the game. Mostly, self-confidence is the single most critical factor to consistently find and catch bass under any circumstance while bass call daily audibles in a game loaded with changing variables.

â€œBeing able to call the right plays in a tournament is 70 to 80-percent mental,â€ Scroggins said. â€œThe fish aren’t always hard to catch once you locate them, but you gotta have your head right to find â€˜emâ€”and that’s the tough part.â€

â€œI swear sometimes Terry does best when he doesn’t fully know what’s there at the end of practice and he has to fish by the seat of his pants on the first day of the tournament to figure it out,â€ Swindle said.

â€œGerald’s probably right,â€ said Scroggins. â€œHe and I will come in from a long practice day and be getting dinner ready, look at each other and admit we’re feeling pretty clueless. And that’s when we always seem to settle on the importance of just going fishing with confidence, knowing that if we keep movin’ we’ll figure it out during the tournament.

â€œYou learn over years on the water that some of the best practices lead to big disappointments, but also some of the toughest practices lead to great tournaments as long as you stay confident with the start of each new day. At BASSFest on Chickamauga, even though it’s a great fishery, I just couldn’t seem to make them bite very well at all in practice. And I knew they were gonna catch â€˜em there.

â€œOn the first day of the tournament about eight boats stopped on the same area I did and started throwing big crankbaits, football jigs, swimbaits and big plastic worms, but nobody was getting bit. So I pulled out a spinning rod, 6-pound test and a shaky head and started letting it glide down there to the school of bass I could see on my sonar in 20 to 28 feet of water. And sure enough, I started catching them! I went on to finish in the top ten and I’m telling youâ€”my practice was not good. But man, you just got to look forward to each new day and fish with confidence.â€

â€œWe’ve all heard itâ€”and it’s trueâ€”local guys just can’t seem to help themselves from fishing history and a lot of times it’ll disappoint you,â€ Swindle said. â€œYou look at a guy like â€œBig Showâ€ who never quitsâ€”searching, moving, staying aggressive, looking for the next school of fishâ€”that’s the guy you better fear because that’s the guy that wins or scores Top 10s more times than not while you’re busy beating up the same spot without good results just because they bit there yesterday or ten years ago.â€