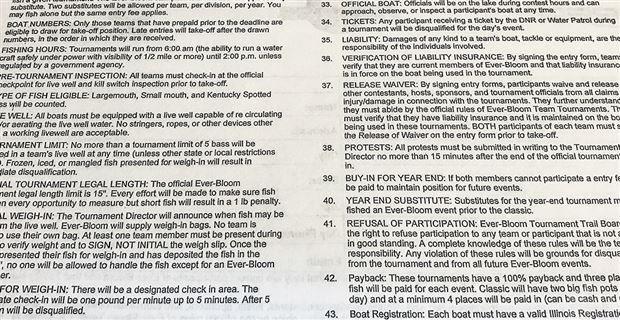 Whether you’re playing ball-and-stick sports or fishing a bass tournament, there are rules you have to follow—they exist to create a level playing field. They take conjecture and favoritism out of the equation if written well.

As the stakes—and prize money—increase in fishing tournaments, the more rules there are. This also means they become more complicated.

Tournament anglers are a wily group and will look for angles in these rules for a competitive advantage. Cheating is not common and can be inadvertent, but it is up to the trail and the competitors to keep anglers honest.

How can we participate if we don’t know them?  It is absolutely essential to know the rules in their entirety.

You may think you know ‘em, but do you really?

Great tournament trails have exceptionally thought-out and well-written rules that followed no matter who you are. A good tournament director doesn’t play favorites and must be strict in their interpretation.

The standards developed by those trails look for the anglers to police themselves, too—no exceptions.

A lack of rules may seem more attractive to some, but ultimately this model will fail. If your buddies are like mine, they will cut every corner and bend every rule to its breaking point and what started out as fun turns into tense; especially when a few bucks are at stake.

It’s even worse when egos enter the fray.  Bending without breaking is almost like a competition within itself to some and many take pride at stretching them to the nth-degree.

For that reason, we should always read the fine print.

There are no excuses

Knowing every rule in your trail is much more than a quick glance and just fishing a lot of tournaments. They are not all created equal and each trail may have some respective rules that could tip the scales.

A case in point was the recent Elite Series tournament at Lake Cherokee in which Jacob Wheeler had a breakdown and was aware of a little-known rule where competitors may fish together in this situation. Had he not known this rule he would not have won the event. He caught one of his largest fish of the tournament with Dustin Connell standing next to him in the front of his boat.

These are rules; they are not guidelines or a matter of opinion.Knowing them can take a lot of the angst out of a gnarly situation ahead of time and make everything run smoother for both the angler and the tournament director.

There is no excuse for not understanding a rule. Tournament directors live for rules and can easily give clarification if asked. They are not mind readers so if you have a question, you must ask.

There is no gray in good rules but some can have interpretation issues. 50 yards is 50 yards and length limits means the fish must touch the line. Lake regulations take priority, too. The best rules are short, concise and straightforward.

Tournament anglers should read the rules carefully before fishing the chosen trail. Most organizations have rules that go much deeper than the fishing part and clarify what boats must have, off-limits areas and rules specific to that trail.

A catch-all for most organizations is a sportsmanship rule that covers how anglers should carry themselves on the water and off. Most want anglers to be good citizens to anglers, other boaters and lake homeowners as well. All anglers are required to follow the highest standards including following league rules, abstaining from mind-altering drinks and substances or doing anything that jeopardizes the trail from effectively running their events.

Safety is a major concern for most trails, too. Lifejackets are mandatory, engines must have kill switches and other safety apparatuses like throwable cushions and ropes are required. An up-to-date fire extinguisher and a horn or whistle are required in most states, too.

The tournament director has the last word and has the right to change tournament fishing hours for any reason including inclement or unsafe weather. Life jackets in particular are essential components and if a trail doesn’t require them anytime the big engine is running, I will not fish it. They are called accidents for a reason.

The best-run and most enjoyable tournaments are where both the trail and the anglers are on the same page with the rules. There is no preferential treatment and they are followed to the letter of the law.

It can be like herding cats to get the anglers aligned with the trail at times but if everyone plays by the same set of rules, tournament fishing can be a great time. It doesn’t matter if it’s a local club jackpot, the Bassmaster Classic or the Forrest Wood Cup.

The rules make the playing field even.