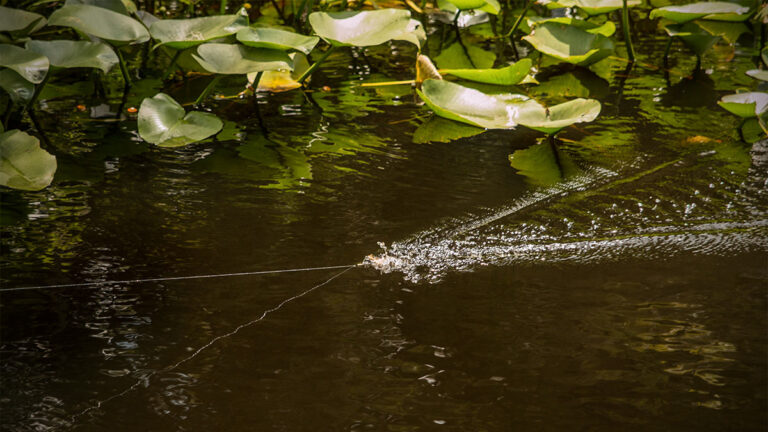 Up until a few years ago, most anglers used what would now be called a traditional buzzbait. Most of these baits had three main components: the prop, the skirt and the wire that held it all together, going from the tip of the prop arm through the weighted head and all the way to hook point. Occasionally, an angler would add a trailer or a trailer hook to a buzzbait. Personally, I’m a big fan of a trailer hook. And I like a small soft-plastic trailer every now and then as well. But that was about as far as the modifying would go with a traditional buzzbait.

But somewhere along the way in recent years, it became extremely popular to ditch the skirt all together and rig a full-sized soft plastic on the back of a buzzbait. Although we recently have seen a massive jolt in the popularity of this technique, it wasn’t unheard of in the past. I’ve heard stories from different anglers of how they used to fish a buzzbait this way, my dad even recounting how he won the 1988 Alabama BASS Nation State Championship fishing a buzzbait with a soft plastic and no skirt back in the day.

But it’s definitely more popular now than ever. So today we’re going to lay out a few great soft plastics to try on the back of a buzzbait, to give you some ideas if you’re wanting to sample this technique or maybe even hone in on it a little better.

Perhaps the most popular bait to fish this way, a toad really is a fantastic bait to rig on the back of a buzzbait. A Zoom Horny Toad is a good example of this style bait and a specific one that many anglers like for this technique. It is a fairly short bait at 4 1/4 inches, so it creates a nice tight package with the buzzbait harness and doesn’t give the fish a lot to swipe at without getting the hook. You can rig a trailer hook with this bait but I don’t really recommend it because it tends to foul up a good bit. A trailer hook also impedes one of the coolest things about this setup, that it skips really well. 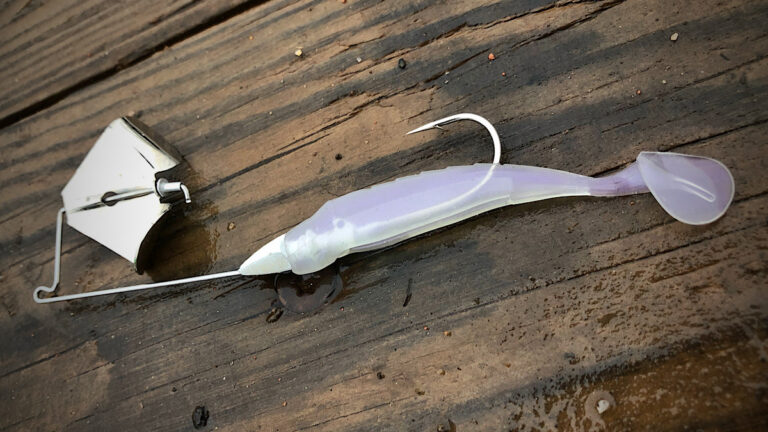 I really like a swimbait like the Missile Baits Shockwave on the back of a buzzbait as well. I’ll actually use a swimbait like this as a trailer sometimes even when I’m fishing a traditional buzzbait with a skirt. But if you get into a situation where the fish are a little finicky and won’t quite commit to the larger profile of a skirt or a skirt and a trailer, you can rig up this little number and get more bites.

Rigging a swimbait is more for open water and cover you can fish through, like tree tops and water willow grass. Not to say you can’t fish a buzzbait rigged with a toad in those places, too. The delineation comes when gauging the aggressiveness of the bass. If they’re really eating, stay with the toad. If they’re slapping it or following you bait, swap to the swimbait. You lose the ability to skip the bait as efficiently when moving to the swimbait but you’ll get more bites on a tough day.

Taking a step even further in the direction of finesse, you can rig up a Zoom Super Fluke or similar-style soft jerkbait on the back of a buzzbait. Naturally, a buzzbait already has a lot going on at the front end with the prop churning water and creating a lot of commotion. Putting a toad on the back of the bait is a way to kind of double down on the aggressive drawing power of a buzzbait. Moving to a little paddle tail swimbait, you’re calming things down a bit and just wiggling a little teaser in a curious fish’s face.

But stepping down once more to the Fluke, you have a super still little tail trailing the bait that makes for an easy target to hone in on. This doesn’t seem like much of a move from the swimbait but going a little more finesse like this will often turn a few more boils into hookups. In hopes of converting a few more bites to bass in the boat, you can also add a trailer hook if you like with this style soft plastic. There’s not a lot of action at the rear end, so the hook has less to tangle up in than with the flapping appendages of a toad or swimbait. 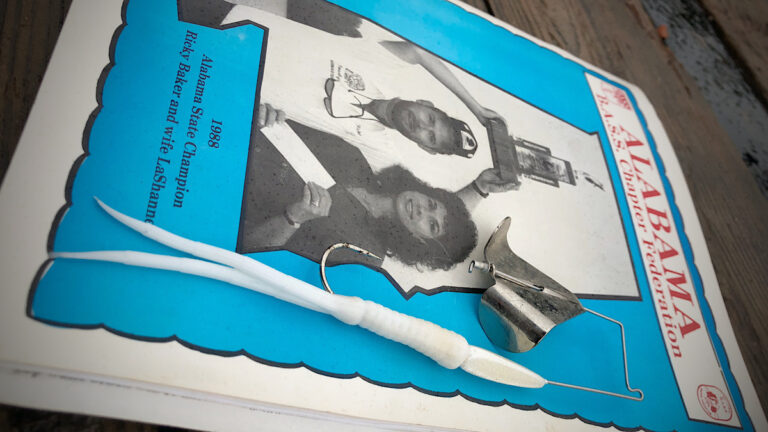 Now this is the soft plastic that I’ve used the most as a trailer for a traditional skirted buzzbait over the years. A soft plastic like the Zoom Split Tail Trailer is slender, so it doesn’t add a lot bulk to the profile of the bait. But the two long, straight tails do add a good bit of tight action. They don’t flail around wildly on the back of a buzzbait but they do shimmy and quiver as you reel your bait along the surface.

However, I rarely use this bait myself these days on the back of a skirt-less buzzbait, but I bring it up because this is extremely effective in tough situations. This is the type of bait my dad won the State Championship on in 1988 during a very tough bite on the Alabama River. On Day 1, he had over 21 pounds. Though I don’t remember the full results, to give you an idea of how tough the bite was, dad could have slept in the second day as his Day 1 weight proved plenty to beat the nearest competitors two-day total. Dad didn’t sleep in, however, and was able to add another 9 pounds on Day 2. I’d say that’s an effective bait on a tough bite. 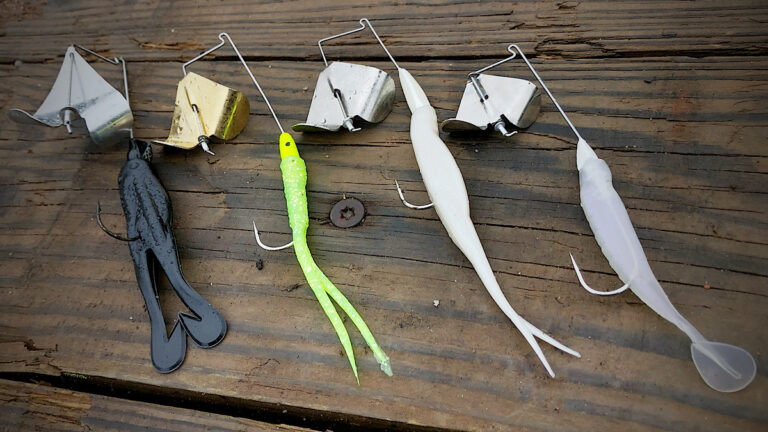 There are countless soft plastics to try on the back of a buzzbait now. Different styles, colors and actions all bring something to the table. But if you’ll try these four baits out, you’ll find that you have a little something capable of drawing a strike no matter how finicky the bass are. Start with the toad, remembering that its greatest contribution is its ability to skip under cover. If you’re fishing open water or sparse cover and the bass won’t commit to the toad, try falling back to a swimbait.

If the swimbait is still a bit much for them, slip it off and slide on a soft-plastic jerkbait. This is usually as far as I’ll go towards the finesse end of the spectrum when fishing a soft plastic on a buzzbait. But if I’m feeling nostalgic, or if you’re fishing a pond or somewhere else that you’re encountering a tough bite, don’t be shy to try a split-tail trailer on the back of a skirtless buzzbait. It’s paid off big in the past for pops. The proof is in the pudding as they say, whatever that means. Best I can tell, try “pudding” one of these soft plastics on the back of a buzzbait and see if you don’t get bit. Man… that one was a stretch… even for me.