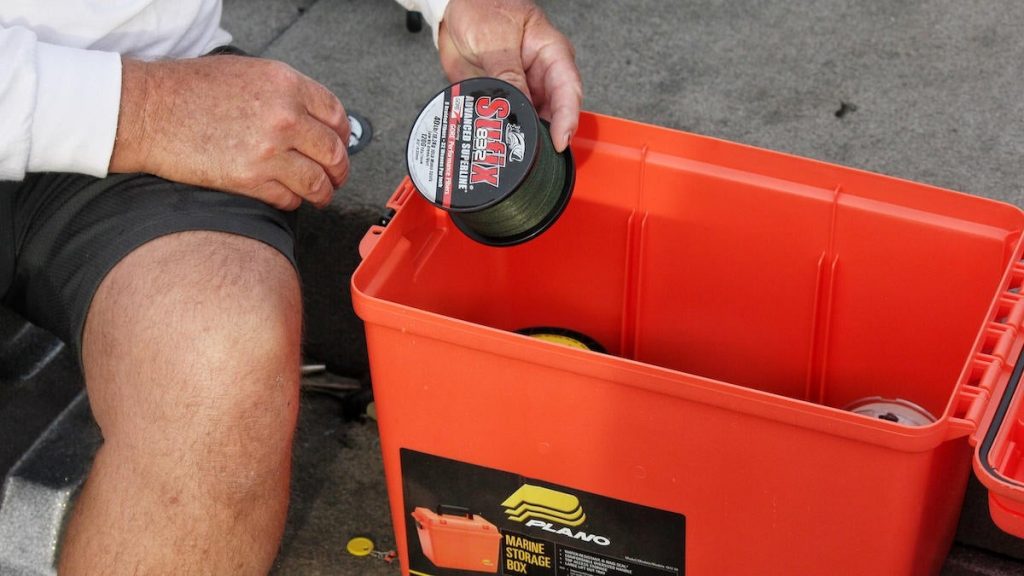 There are two common assailants that are detrimental to the shelf life of most fishing lines: humidity and sunlight. You want to store fishing line in a cool, dry, relatively dark place. If you prefer to buy a lot of bulk spools of line, this will help protect your long-term investment and keep it as good as new for years and years.

On the other hand, most smaller spools of line and even bulk spools if you fish a lot don’t really need to have a shelf life of 10 years. I, like most anglers I assume, will typically spool up a small spool of line within a month or so of its purchase. So there’s no need to bust the bulb in my fridge and put that spool of line in there in an airtight Tupperware container.

Still, I wouldn’t recommend leaving a spool of line in the floor of the boat until you need it either. So here’s what I think is a good middle ground for storing a reasonable amount of fishing line.

Cut down on humidity the best you can 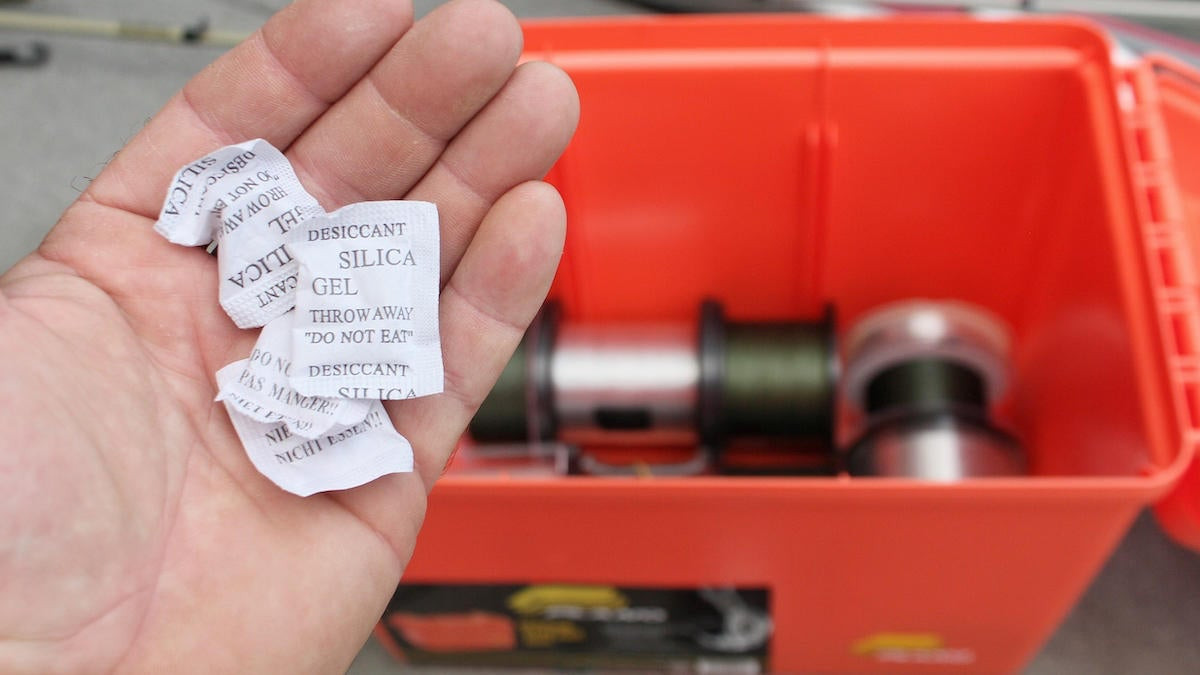 Using a waterproof box to store line in your boat will obviously cut down on the amount of moisture that comes in contact with your line. But the humidity in the air will still get trapped inside the box each time you open and close it. And the humidity is significant at times here in Alabama where I’m from. To combat that, I’ll throw in little silica gel packs like you’ll find in a box of new tennis shoes. The silica gel will actually absorb the moisture from the air and keep the air in the box dry.

I prefer a fairly large waterproof box like the Plano XL Dry Storage 1812 for storing bulk spools of line. It’s big enough to hold a lot of line and is easy to take in and out of the boat which is nice if you’re staying at a hotel and need to re-spool or just want to make sure no one walks off with it.

I like to buy bulk spools when I can so that I don’t waste as much line. If I buy a 150 yard spool of line I’ll inevitably spool two or three reels with it and then there will be a little line left on the spool, but not enough to spool a whole other reel. Using bulk spools, I can spool however much line I want on each reel and not worry about running out or wasting that last section of line quite as often.

Side note: If you have a clean stretch of grass where you live, you can take a 150 yard spool and divide it directly in half by walking the line all the away off the spool and then doubling back until the two ends meet. Then go back to where the line has formed a “U” and cut it there. That way you can be certain you won’t leave 20 or 30 yards on the spool or be putting too much on one reel and not leaving enough for the other. This works really well for smaller diameter lines. Once you get up to something like 65-pound braid, 150 yards is likely enough to spool 3 or even 4 reels depending on what you’ll be doing with those setups. Now back to storing line… 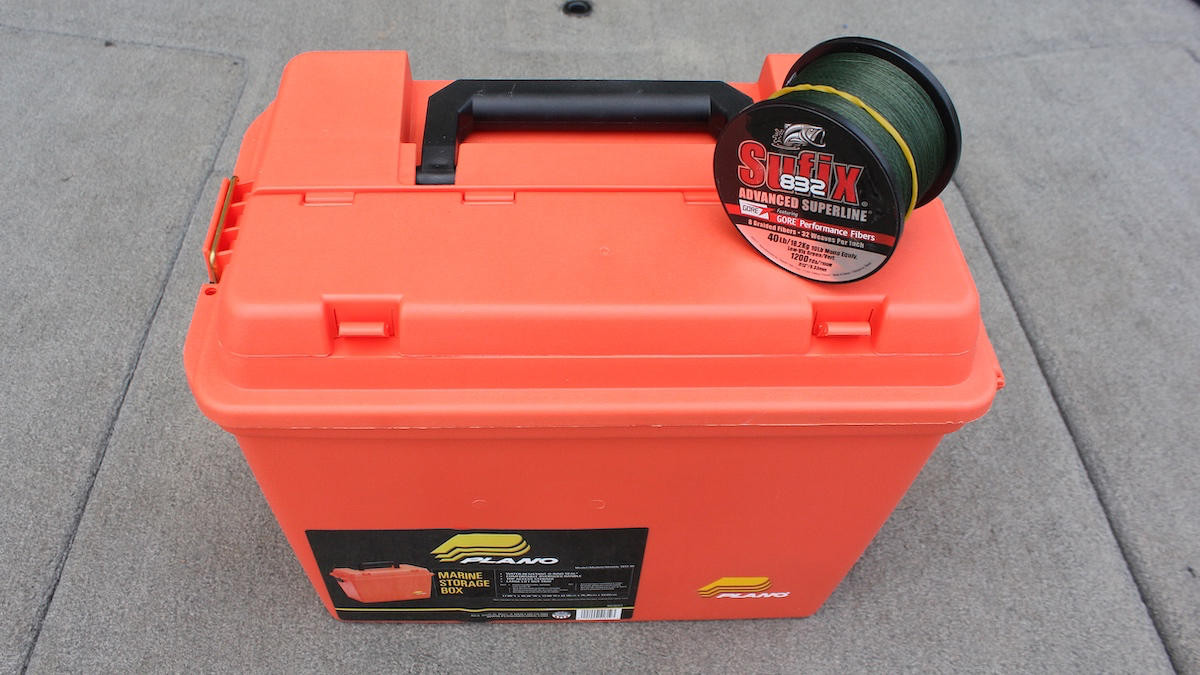 When storing your line, again you want to keep it pretty dark. This tends to be a bit more of a challenge outside of the boat than in it. Regardless of the container you use to store your line, you’re naturally going to put that container in one of the compartments in your boat, which naturally again are dark.

Eliminating harmful sunlight from reaching my line regardless of the setting is another reason I went with the Plano 1812. The plastic is a solid color unlike most clear tackle and storage boxes. And I can move my line from the boat to the shop or anywhere in-between and still keep it in the same container.

When storing line in the shop, house or wherever you store your fishing gear, you want to make sure that your line isn’t right in front of a window basically. Again, if you want to keep a spool of line for 10 years, its best to go above and beyond and shroud it in complete darkness until then. But for most of us, a little ambient light won’t hurt your line in the amount of time it’ll take you to use it. 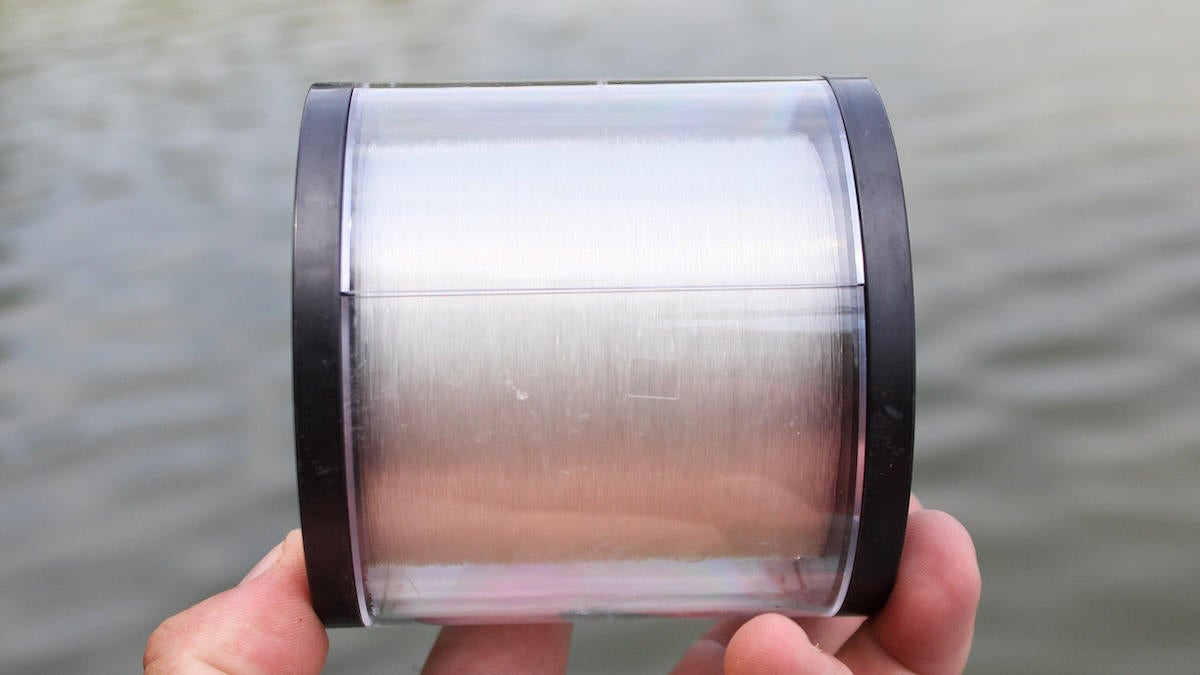 It’s really important to store your line separate from your other gear. Don’t put a spool of line in a box with a few packs of worms, a crankbait and a set of pliers for example. Bumps on the road and boat waves will inevitably bring the line in contact with something sharp or rough if it’s available and you’ll have a knick in your line that you won’t even know about until it costs you a fish catch.

Several different companies ship their spools of line now with hard plastic sleeves. I like to keep these even after I use up the spool and then put them around any spool of line I buy that doesn’t come with them. These are really helpful at preventing even the spools of line from getting on top of one another and roughing each other up.

Another good practice is to use bubble wrap or some other packaging material between the spools. This is a particularly good idea if you have a lot of spools and want to layer them on top of each other. And just a good practice in general to keep spools from bouncing around and banging into one another. 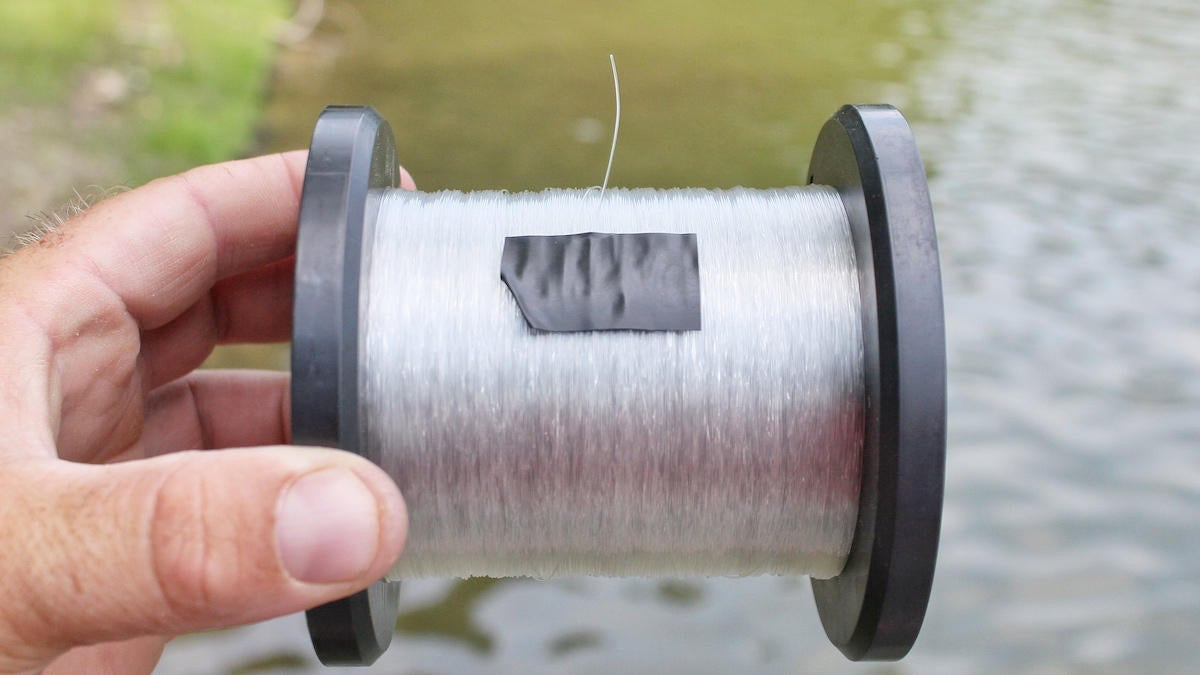 Lastly, you should always secure your tag end. If you don’t, you’ll open your line box to a find a bird nest where one of the spools has come unraveled. Most companies now build something into the spool to use to secure your tag line. But if your spool doesn’t have anything like this, you can either use a small piece of tape or a rubber band to secure the line and voila, no more mess.

If you don’t do this, you’ll end up wasting a good bit of line and cost yourself time in the process. The goals when storing line are the same as storing anything to do with fishing: you want to protect your investment and maximize organization to minimize loss of time. Use these simple tips when storing your fishing line and you’ll do just that.