It’s the end of another long Bassmaster Elite Series tournament day, and what appears to be a retired and discarded hook that lost a fight with a pair of needle nose pliers lays on the floor of Greg Hackney’s boat.

“Oh, no, it’s fine, I bend all of them that way on purpose,” Hackney is quick to explain. “I bend them off-center like that anytime I’m rigging a wide-gap hook into a Senko-style bait, a Caffeine Shad, or a soft plastic minnow type lure.”

“My theory is that because that hook point is bent out, and off-center from the eye, it’s bound to catch some portion of the bass’s mouth when I jerk,” said the Quantum pro.

“I mean if you think about it … when that point is perfectly in line with the eye, and you jerk, there’s a good chance that the hook point is going to bury straight into the lure and never hook the fish. You know what I’m sayin’?” asked Hackney, looking for a head nod to a question he already felt confident he had the answer to.

How do you argue with a guy who has made well north of 2-million bucks as a pro angler? And perhaps more admirably, is still trying to be better at his craft.

Hackney’s purposeful mangling of a perfectly good 75-cent hook is totally understandable in his quest to add a few more hundred thousand bucks to the more than two million he’s won so far.

“I wanna do better than I’m doing,” said Hackney in a moment of heartfelt confession. An awkward moment actually, considering it was coming from a guy who has qualified for 10 straight Bassmaster Classics.

“No, really, “ said Hackney. “I mean … I’ve had a great career, but I just feel like I should be doing a lot better.” “I’m even trying to eat better. Eat more protein, eat more vegetables, and eat more regularly during tournament days from the package of food that Ken Hoover (sports nutritionist) packs for me.”

Most of all … he strives to be better tomorrow than he was the day before. “Heck, I haven’t eaten a french fry in days,” grinned Hackney in conclusion, as he bent another wide-gap hook point slightly sideways with his pliers. 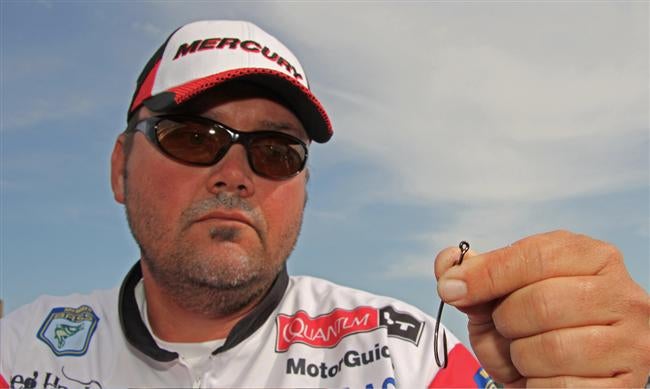