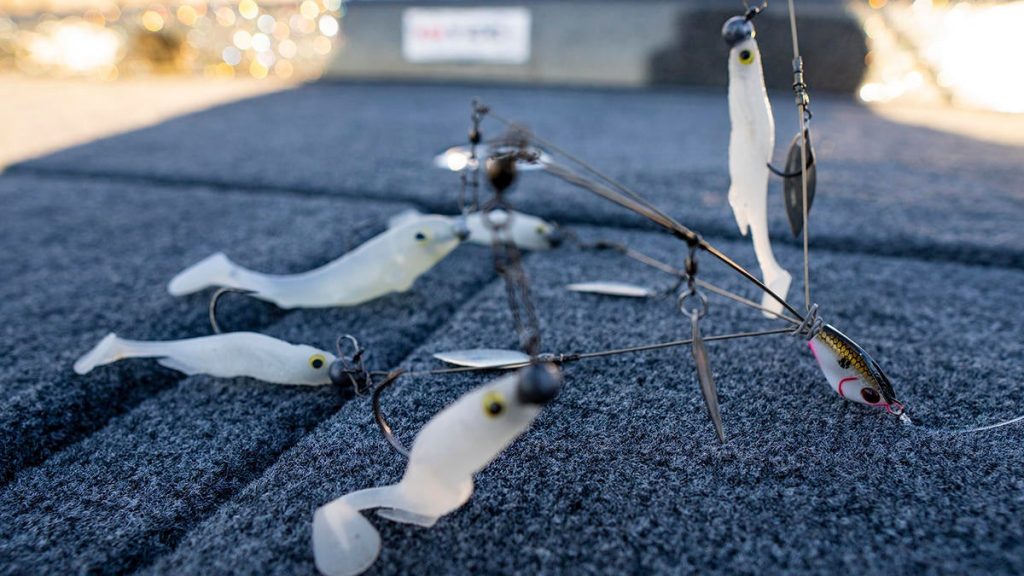 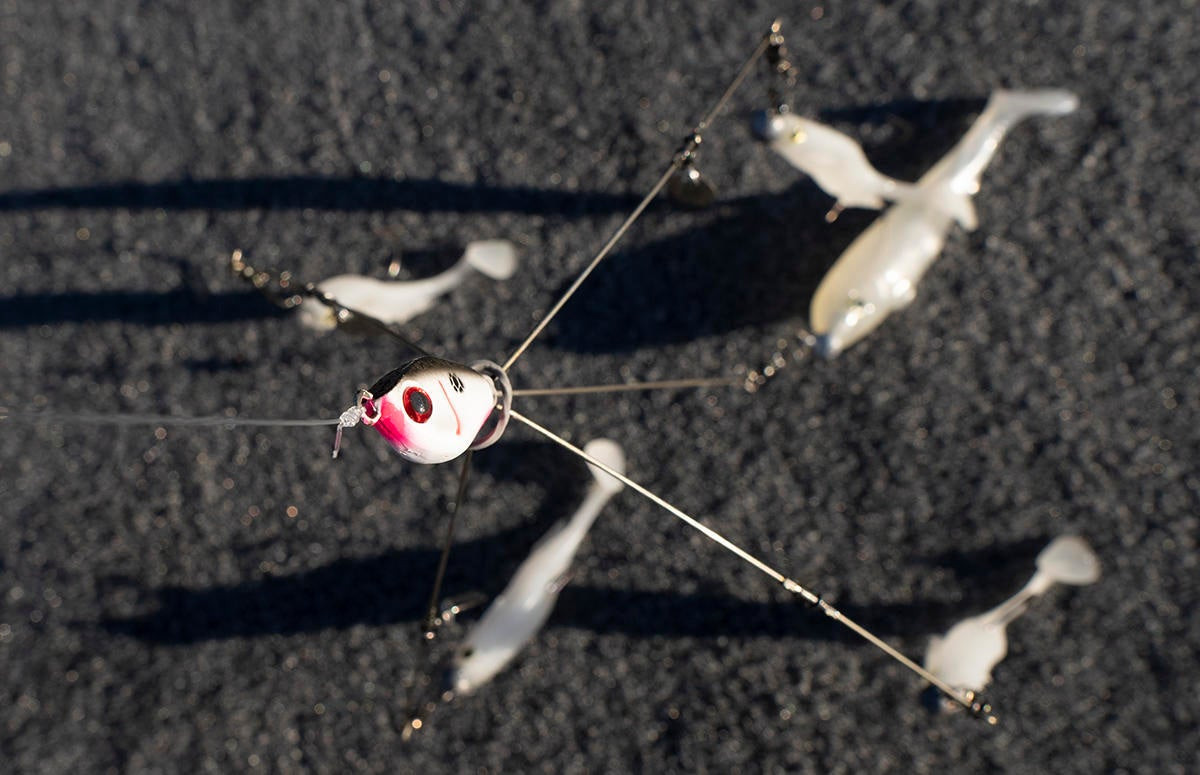 The original Yumbrella is a fish catcher too, and it’s what I started throwing in the very beginning shortly after they came to market in the first year after the initial explosion of umbrella rigs on the bass fishing scene. But when they released the Flash Mob Jr., it quickly replaced all the other options because of all the adjustments and how it fished.

The wire on the Flash Mob Jr. is the right length. You can open it wide to spread the school out or angle it back and keep it compact and a bit easier to cast in the wind. The wire is the right gauge to flex on the cast and pulse on starts and stops, which I think is a large part of an umbrella rig’s appeal.

I will generally open the Flash Mob Jr.’s wires at 45-degree angles from how the head sits in the water and spread them open pretty far. I often go with 1/4-ounce heads in the winter and smaller swimbaits. But that’s the beauty of this smaller rig.

With the small blades, you can adjust your head size and tail size and get the rig to run deep or any depth you want at any speed you want. The smaller blades help the whole rig stay down, as in the winter, you often fish deeper than 20 feet with it. Small 3 or 4-inch swimbaits and 1/4-ounce heads and you can keep the Flash Mob Jr. down on a slow retrieve. 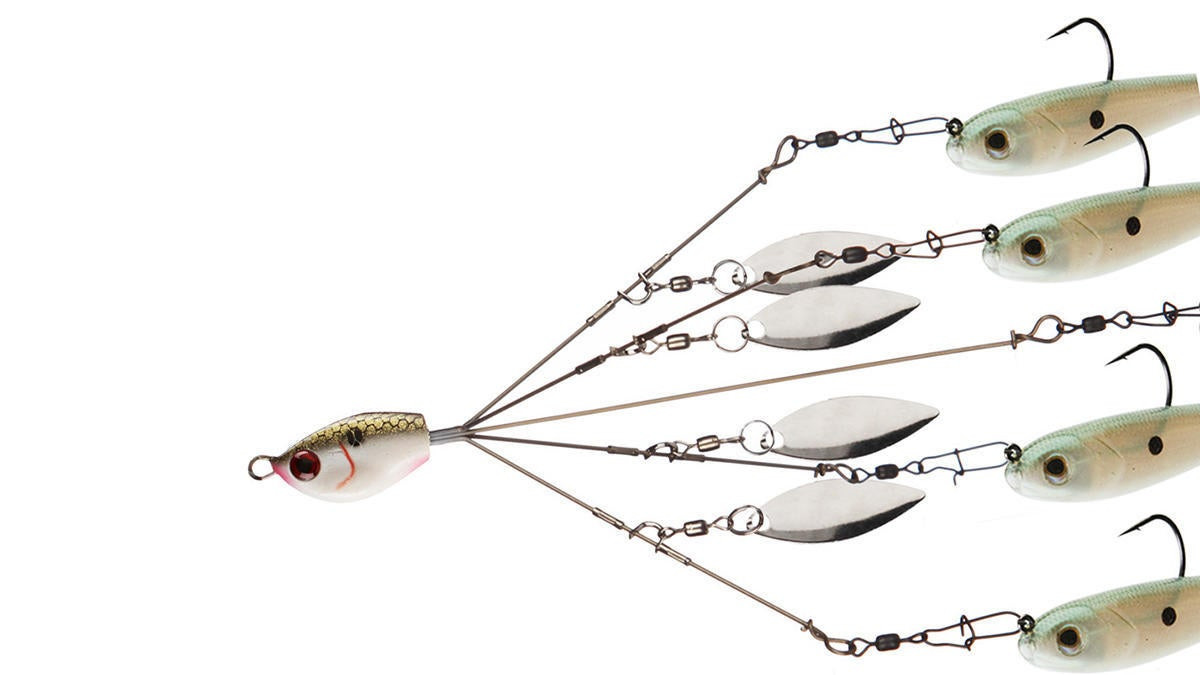 The original Flash Mob Jr. had spinnerbait clevis holding the blades on and they used really thin wire snaps and swivels. Those first couple of years, I broke off blades and lost some bigger fish especially big stripers with the components those early models had. Now the the blade spins freely inside of a modified knuckle (see slide 4) and the swivels and clasps are beefed up to offer a lot more strength and durability. I will fish the same rig sometimes all year.

Usually when you snag or have issues, you bend out the hook on the jighead or dull the hook and just swap out the jigheads. I have had a wire break occasionally but that’s usually because you bend the wires in and out and they finally weaken. Just be mindful of that and it will last a long time. 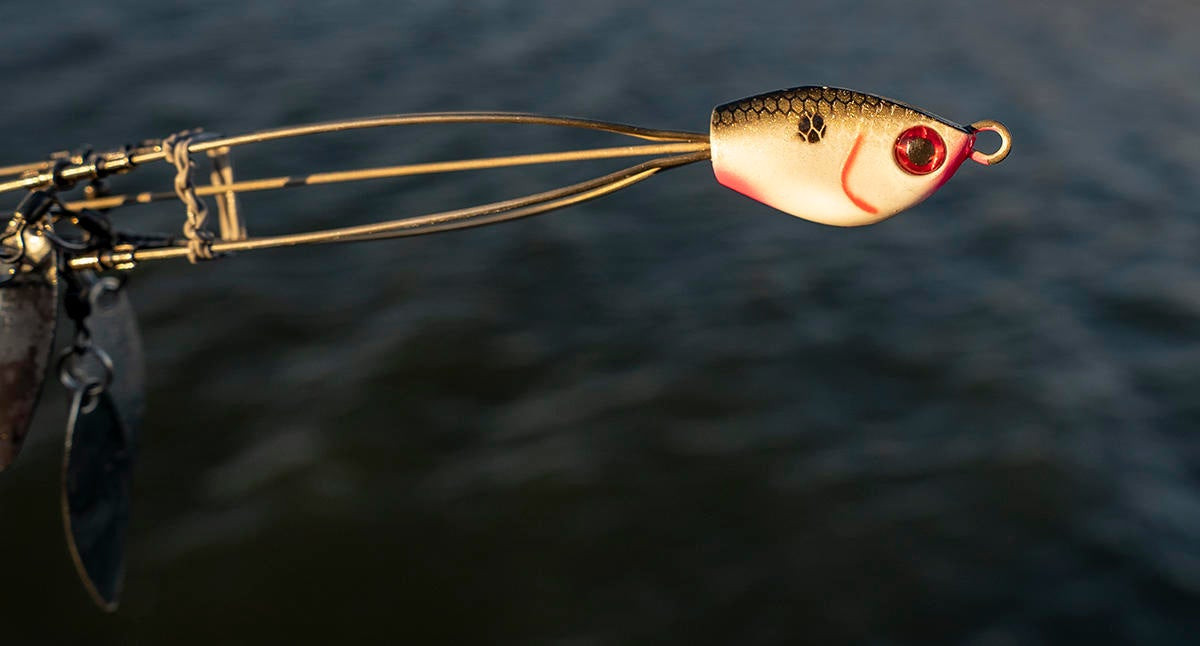 I keep a small rubber band double wrapped around the wires to keep it all compact when stowing or running, so it’s not always tangled up in my other rods which can get really annoying. Then when you’re ready to fish, just slide the rubber band up to the head, and it will open right back up. I usually won’t bend the wires closed and open, as when you do that a bunch of times, the wires can finally get a weak point and break.

Usually I just slide the rubber band down, and it closes the wires without bending them down.

Rotates around freely in molded knuckle 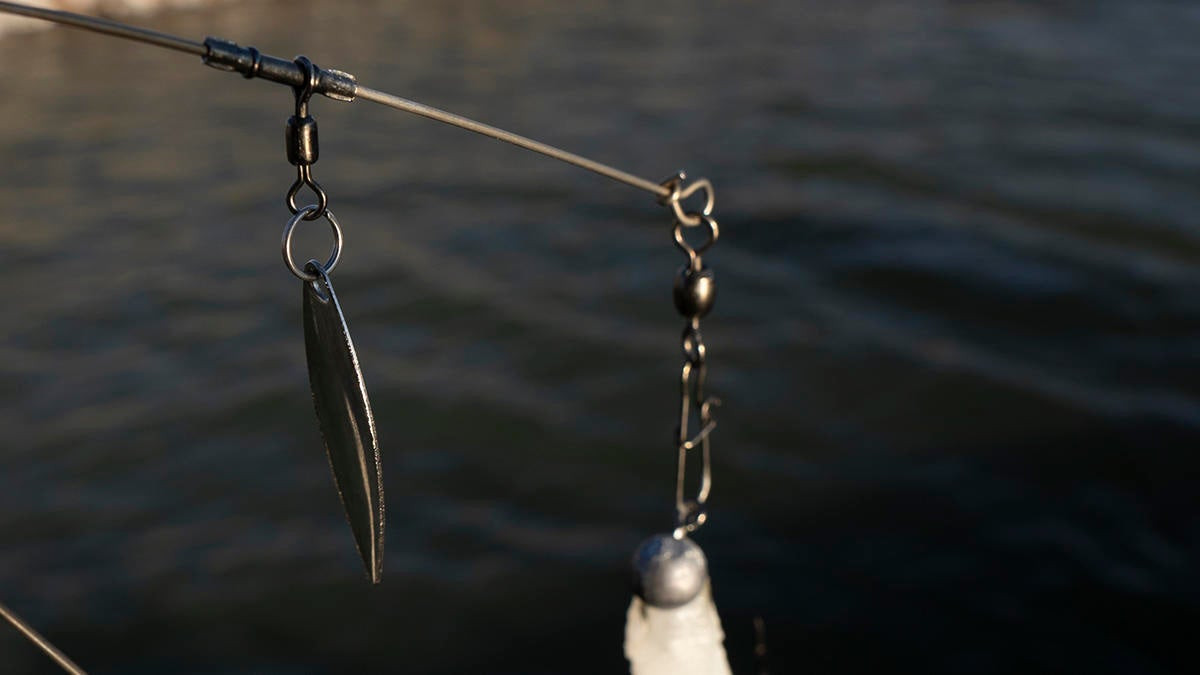 The way the blades are on the knuckle, they spin freely and easily and hang up a lot less than the original design on hooks and line. 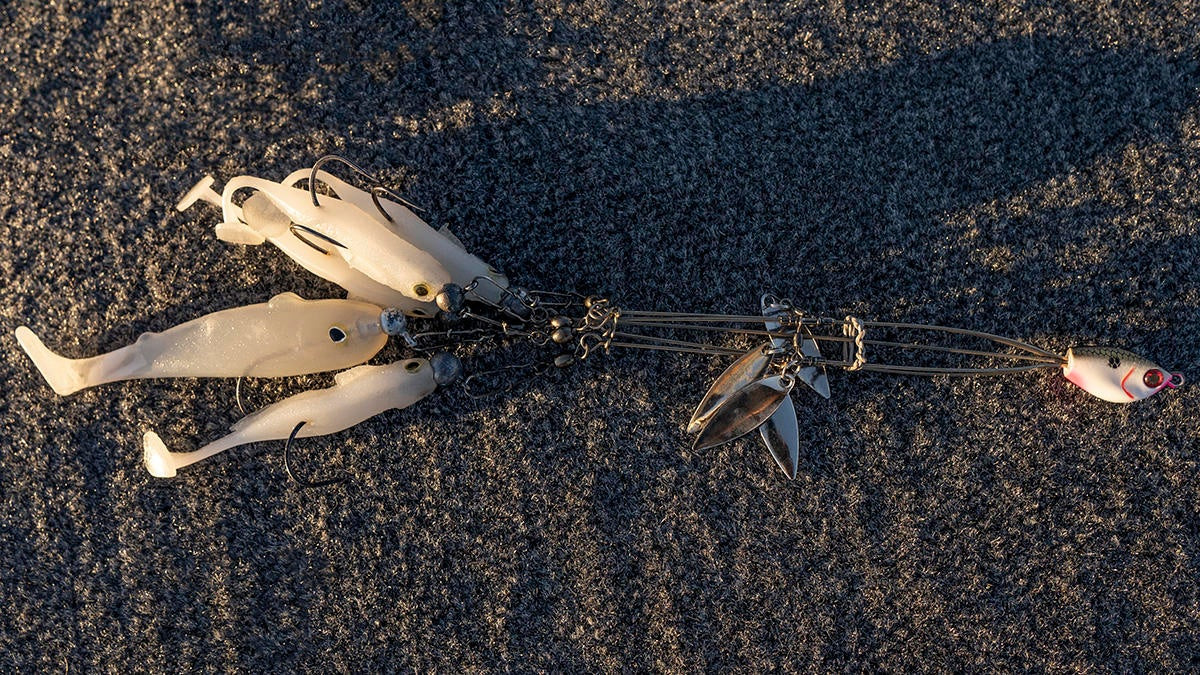 I experiment a lot with swimbaits on the Flash Mob Jr. I will use tiny 3-inch swimbaits and sometimes full sized 5-inch hollow bodied swimbaits. I often put a little bit bigger bait in the middle or sometimes just a slightly different color. You can put 5 small swimbaits on there, and it looks like a school of 10 minnows. You have the 5 swimbaits, 4 blades and the head to give it a pod of baitfish broken off from the big school.

I also will use a little bit bigger tails and lighter 1/8-ounce heads and fish it shallow. Or I might stick with light heads and use smaller swimbaits and fish it just like a spinnerbait around grass or in the fall when I want to fish faster around cover or schooling fish.  The Flash Mob Jr. is a great rig for experimenting and fishing it a lot more like conventional lures.

Been the go-to for years 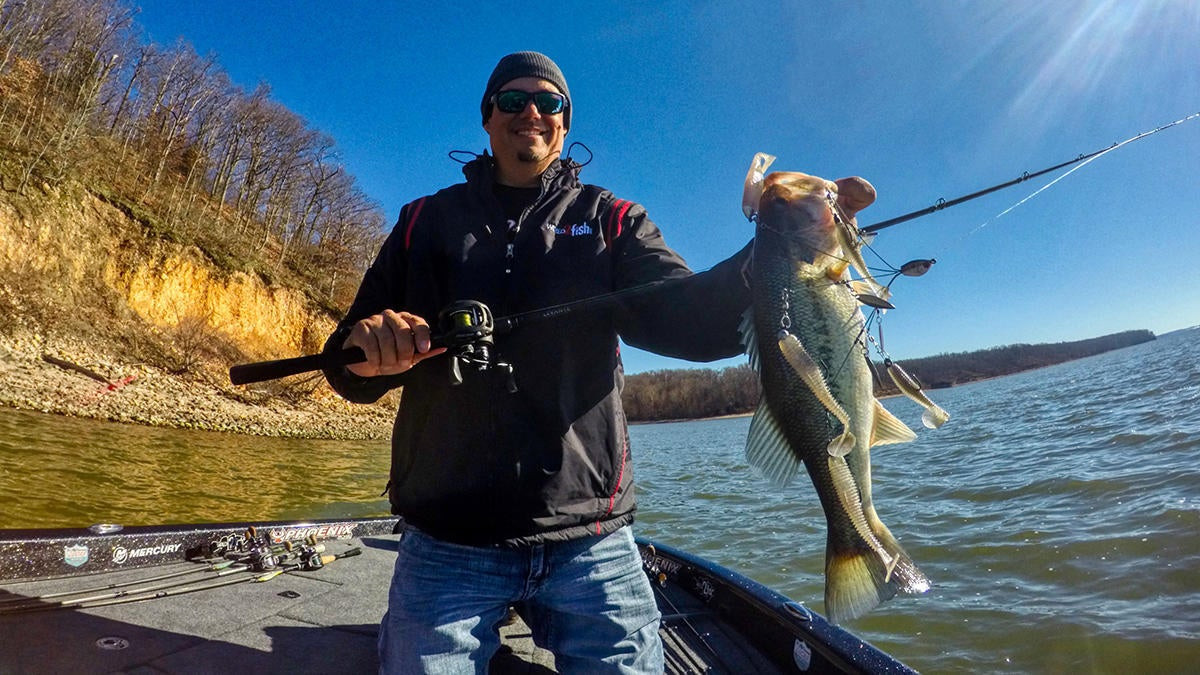 I will admit I threw it a lot less the last couple of years because of really bad tendonitis in my elbows and forearms. But I keep it rigged and give it a few throws on every stop in the winter because I know what it can do and has done.

Too many doubles to even remember anymore 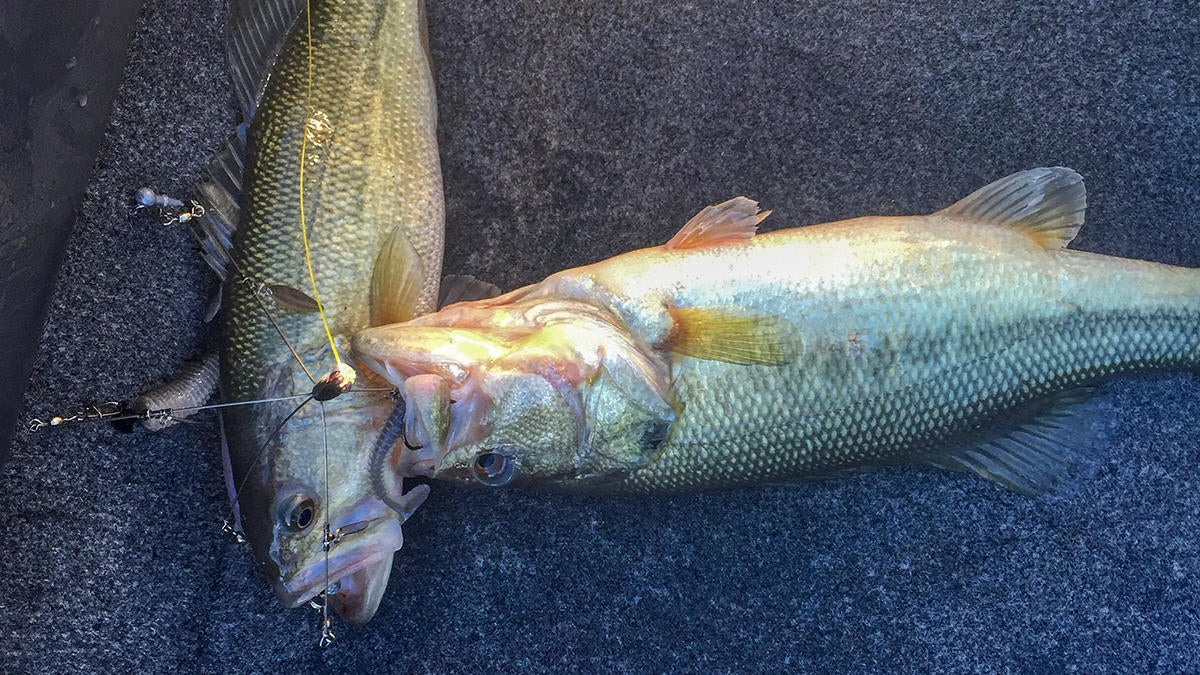 It’s crazy to think how many doubles I’ve had on it with a sprinkling of triples. I’ve never caught 4 at once or faked catching 5 bass on it like some. But I’ve caught more doubles than I could even remember at this point. And that’s part of the allure for me on the rig. I’ve had some big bass I thought were multiples and other times where I thought I had a giant and it turned out to be two 4-pounders or a 4-pound smallmouth and a 6-pound largemouth. You never know with the Flash Mob Jr.

Smallmouth love this rig. I’ve caught tons of spotted bass on them and piles of largemouths. I’ve caught them in muddy water, but most of the time stained water or windy conditions in clear water seem to be best. I have had some bang-up days on dismal cloudy cold winter snows.

I generally stick with 65-pound braid or 20-pound monofilament to throw the Flash Mob Jr. and a long heavy-power rod coupled with a reel with low ratio gearing and a lot of drag.

You can find the Flash Mob Jr. at TackleWarehouse.com. It’s one of the more affordable umbrella rigs with blades at $12.99.