Iâ€™ve always found it odd that a small percentage of bass fishing lures get the majority of attention in our community. Dig into most anglersâ€™ tackle boxes and youâ€™ll likely find the same handful of baits and lures. But hear me out on this, folksâ€”thereâ€™s a lot of fishing tackle that simply doesnâ€™t get the consideration and credit it deserves.

In this case, Iâ€™m referring directly to the XCalibur XCS Square Lip Crankbait. I was cranking some shallow docks with it several weeks ago and it hit meâ€”nobody ever talks about this lure. You donâ€™t see it on television very often and itâ€™s rarely reviewed by the fishing media, yet I strongly believe itâ€™s one of the most effective and well-built crankbaits you can get your hands on.

To consider it the â€œdark horseâ€ of the crankbait family would be quite accurate.

Iâ€™ve used it for years and have caught fish all over the country with it. Hereâ€™s why I think it deserves more attention from anglers.

It has some weight to it

Iâ€™m a sucker for a heavy crankbait. There are certainly times when a lightweight plug is most effective, but more times than not, I like for my crankbaits to have some bulk to â€˜em. Weighing 1/2-ounce, I wouldnâ€™t necessarily consider the XCalibur XCS Square Lip Crankbait a â€œheavyâ€ crankbait, but it has just the right amount of weight to allow for effortless casting into tight, hard-to-reach areas.

I most often use the XCS 100, which is the smaller 2-inch model. Many other crankbaits this size are fairly lightweight and cumbersome to cast. This causes anglers to â€œpullâ€ their casts and experience an increase in irritating backlashes. This lure, however, casts like a bullet with very little effort. It doesnâ€™t helicopter during flight and it resists heavy winds quite well. 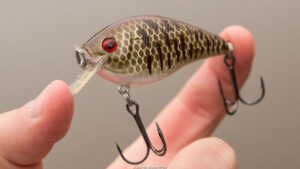 This has helped me make much longer and more accurate casts in both short-range and long-range situations. I can pitch it underneath docks, into laydowns and towards grass line irregularities without a dramatic back castâ€”all I have to do is snap my wrist and the lure lands exactly where it needs to go almost every time.

When Iâ€™m fishing open water such as stump flats, long stretches of riprap and shallow points, Iâ€™m able to use the wind to my advantage without worry of wind knots and excessive tangles. If I need to cast a squarebill into the wind, Iâ€™ll often opt for the XCS Square Lip for this very reason.

Great action at every speed

I fish squarebills much faster than most folks. Itâ€™s not science by any means, but I think thereâ€™s a lot to be said about the correlation between the element of surprise and vicious reaction strikes. Thereâ€™s one problem, thoughâ€”Iâ€™ve only found a few plugs that will withstand a fast retrieve speed without blowing out and losing their ability to run correctly.

This is one of the primary reasons I have such a strong affinity for this lure. I can retrieve it slowly and feel it thump side-to-side with an aggressive wobbling action or burn it around inactive fish and watch my entire rod vibrate due to its unique â€œrolling wiggleâ€ as I call it.

When burning this crankbait, youâ€™ll notice it darting to each side a few inches before returning to center. I frequently fish it on a 7.1:1 gear ratio casting reel and Iâ€™ve yet to be able to make it spin out. I can fish it as quickly as I possibly can and remain confident that it is presenting itself in a lifelike manner.

I always talk about the importance of a crankbait that â€œhuntsâ€ and thereâ€™s a good reason for itâ€”shad rarely swim in a straight line. Theyâ€™re spastic little dudes and our crankbaits need to emulate their erratic behavior. Regardless of your retrieve speed, the XCS Square Lip hunts without losing its original path, which in my case, has resulted in an incredible number of bites over the years.

In my opinion, thereâ€™s absolutely no point in fishing a squarebill unless youâ€™re going to slam it into every piece of cover you can find. Whether itâ€™s a rock, dock post, limb or an old patio chair in the water, you need to be sure to make contact with it. Itâ€™s all about reaction strikes when Iâ€™m fishing these lures.

This is why I go out of my way to find and purchase durable squarebillsâ€”theyâ€™re the proverbial wrecking ball of my tackle collection. The durability of the XCalibur XCS Square Lip has impressed me since the first time I used it. No joke. 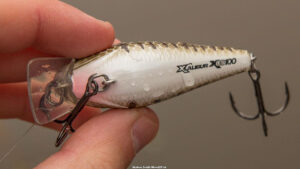 I havenâ€™t cut one open or anything like thatâ€”I like mine too muchâ€”but it almost seems as if they have a much thicker body construction than many of my other squarebills. Itâ€™s honestly kind of difficult to explain, but youâ€™ll understand what Iâ€™m referring to when you have it in your hands. Itâ€™s just flat-out solid without any flexing whatsoever.

Youâ€™ll also notice a very solid connection between the bill and the body of the lure. Lots of squarebills have an issue with cracking and separation at this connection point, but I have yet to have an XCS Square Lip break, crack, split or shatter. And like I mentioned earlier, Iâ€™m incredibly rough and demanding on my squarebills. 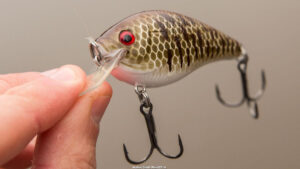 The high-quality paint schemes and finishes are also worth noting. Youâ€™ll experience just a small amount of hook rash after a few weeks of heavy use, but the color scheme stays intact without chipping or peeling, even after a bunch of fish catches.

This past summer, I left one of my dozens of squarebill boxes in my boat while I was at ICASTâ€”somehow I overlooked it and left it in my rod box. When I returned home, the Georgia heat had done a number on them. I had several that were warped and split down the sides. The only plugs in this particular box that were not affected were my XCS Square Lips. True story.

Open the package and go fishing

Fishing isnâ€™t necessarily a cheap hobbyâ€”we all know that. So when I spend my hard-earned money on a particular lure, I want it to be ready to fish straight from the package. Iâ€™d rather not change treble hooks and split rings. I want to go fishing, not tinkering.

I do, however, modify a lot of my squarebills because Iâ€™m somewhat of a crankbait nerd. But I do not make any tweaks or modifications to the XCS Square Lip. I take it out of the package, tie it on and fish. 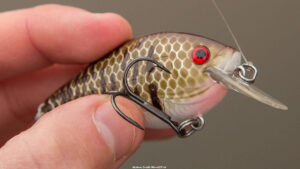 In my opinion, the treble hooks are totally suitable for both tournament fishing and fun fishing trips. Theyâ€™re made with fairly heavy wire and donâ€™t flex or bend when youâ€™re fighting big fish. Theyâ€™re very sharp, as well.

The oval-shaped line tie is also very convenient and strong. It allows me to tie knots quickly without the line becoming snagged in the opening of a traditional round line tie. Some say these oval line ties give crankbaits more action, but Iâ€™ve never seen any tangible evidence of that. I prefer them simply because they make knot tying much more efficient.

If you like to fish shallow crankbaits, donâ€™t overlook this one. For reasons beyond my understanding, itâ€™s a major sleeper in the fishing community. Iâ€™ve always enjoyed using it and I believe you will, too.

The XCalibur XCS Square Lip Crankbait is available at TackleWarehouse.com.