I’m a big believer that many anglers totally underestimate the importance of a good hook—especially when fishing soft plastic worms. While you can stop by the corner store and grab and pack of hooks and enjoy moderate success, you will undoubtedly catch more bass when you become more selective in your hook selection. I’m speaking from first-hand experience.

I’ve been using the Lazer Trokar HD Worm Hook for several years and they have allowed me to have an extremely high hookup ratio. Whenever I’m making long casts with a big worm, this is hook is certainly one of my top picks.

Here’s what I think makes these hooks so effective. 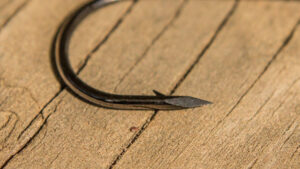 I know, that’s a Captain Obvious statement. But when you compare the HD Worm Hook with many others, you will be able to tell a difference. You’ll see exactly what I’m talking about. You can’t really run your finger across the tip of this hook—it will immediately grab ahold of your skin. You’ll also notice that it pierces your soft plastics with much less pressure.

But perhaps the most telling sign of its sharpness occurs when I set the hook. On many of my hooksets, I can actually feel a slight “crunch” when I connect with the fish. That’s something I’ve never felt before and there are others who have made the same statement.

I also like the fact that I don’t have to drop my rod tip and execute some crazy, jumping hookset when I get a bite. I fish a lot of deep brush throughout the summer and winter months—if you wait too long before jerking, that fish will wrap you around the branches and you’ll never get her out. It’s one of the most common mistakes I see when taking others fishing.

The HD Worm Hook doesn’t require a slack-line hookset. When I feel the bite or any added pressure, I’m able to immediately pull upwards without dropping my rod tip and wasting any time. Before the bass has a chance to wrap you, you’ve already got her coming towards the boat.

Sealock said the same thing after he tested the Trokar Tournament Tube Hook. If you’re used to digging hooks out with your bare hands, you’re in for a rude awakening with the HD Worm Hook. You will usually hook the fish TDC (top-dead center) in the hardest part of their mouths. That’s why I’ve lost so few fish while using it.

I’m not trying to be cutesy when I say this. You seriously need to keep a pair of pliers on your front deck when you fish with this hook, so you don’t keep the bass out of the water for too long.

I have been snagged in several brush piles when fishing this hook. Usually I’ll just pull the line straight and try to straighten the hook so I don’t have to disturb the “juice” too much, but I can’t really do that with this particular hook. It does not bend easily, which may cause a few more break-offs but it also means it won’t flex while fighting a big bass.

The point of this hook is thinner than many others, which is what makes it so sharp. This will result in a few rolled points at times, but it has only happened to me roughly three or four times over a several-year period. It has been nothing that has costed me a significant amount of money. If it did, I’d surely tell you about it.

If you’re going to be dragging a big worm this year, it’s worth picking up a few packs of these. Even if you try one of your buddy’s, you’ll see what I’m talking about. This is a sharp hook that hooks ‘em TDC the large majority of the time.

The Lazer Trokar HD Worm Hook is available at TackleWarehouse.com.