The flipping and pitching bite was very good this spring on Kentucky Lake. For about two weeks you could just bounce around and load the boat with 3- to 7-pound bass flipping bushes, trees, vines, or any other flooded cover. That gave me a lot of time to play with hooks and plastics for flipping. One of my new favorites for bass fishing flipping plastics is the Strike King Magnum Rage Bug.

The Magnum Rage Bug is an oversized bug flipping bait that features a streamlined ribbed body with 4 appendages that swim easily on the lift and drop in and around heavy cover. So the bait has the profile you need to get into thick cover, but it also has a lot of action. It’s a large bait compared to most other bugs and beavers on the market. That was what initially attracted me to the bait this spring. 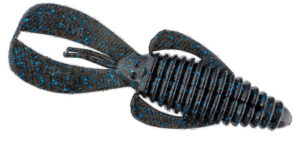 But what I found more beneficial about the bait is the formulation of the plastic. If you’ve pitched ribbed bug baits around thick wood cover, you know after a couple of fish the bait will have a hard time staying on heavy gauge flipping hook. The Strike King Magnum Rage Bug held very well on 4/0 and 5/0 straight shank flipping hooks like the Trokar Big Nasty Flippin Hook and the Zoneloc Flippin Hook.

The Magnum Rage Bug has a great weight to it. So I was able to flip it on a little lighter 3/8 and 5/16-ounce weights and get a lot more bites I felt like when I heard others talk about how tough the flipping bite was for them. I think my choice of baits and more dense targets accounted for a lot more bites. I had a lot of confidence in the oversized Rage Bug after my first day with it. And I think the paddle action of the tails actually makes a difference when pulling it up and through cover as I got a lot of bites when I was going to take the bug out of a bush or tree and pitch to the next target. 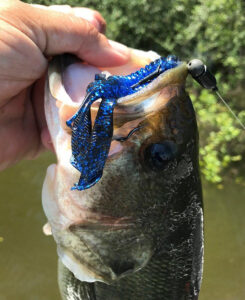 A pack of 6 Magnum Rage Bugs lasted me through hooking and wrestling 25 quality bass in some gnarly cover in a single day. After several bass, I would bite a little off the head and rig the hook farther down into the body. I caught 8 bass on one Magnum Rage Bug in one little flurry. That’s quite an improvement over other flipping bugs. For a couple of weeks I rotated through this and a few other plastics but found myself coming back to the Structure Bug.

The Strike King Rodent is a staple here flipping bushes, but I think the Magnum Rage Bug will become one of the staples in my flipping and pitching rotation now after such a successful first season with it.

You can get a 6-pack of Strike King Magnum Rage Bugs at TackleWarehouse.com and retailers that carry Strike King soft plastics. My favorite colors are Black Blue Flake, Okeechobee Craw and Summer Craw. 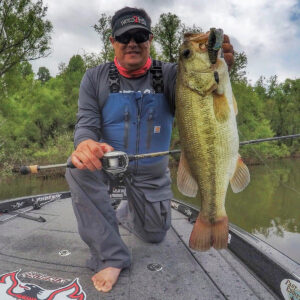