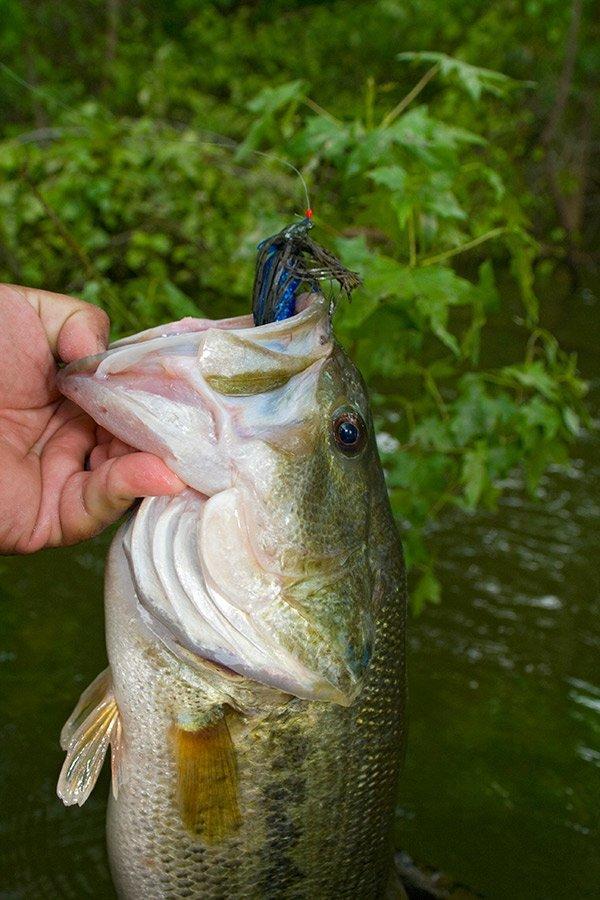 That’s what I heard on my voicemail the night before my photo shoot the next morning with Denali pro Terry Bolton. We were going to test his new rod (review coming shortly) on a private lake in Western Kentucky the following morning before it got too warm. The owner of the lake assured us it wouldn’t take long to catch some nice bass and test the rod’s merits.

Being a man of little time and multitasking genes, I figured it might be a good chance to test some other products. The lake was full of heavy cover in the form of grass, logs, laydowns, standing timber, brush piles and even a little rip rap. So I rigged up a Denali Jadewood Flipping Stick with 50-pound Seaguar Kanzen Braid on a Lew’s Tournament baitcasting 6.4:1 reel. To the end of the braid, I tied the Strike King Hack Attack Heavy Cover jig in Candy Craw with a Rage Tail Chunk for a trailer.

I have been looking forward to a flipping bite since the awesome flipping on Kentucky Lake during last year’s flood. Unfortunately this year saw record droughts in the area and there was not a single day of flipping as a result. But a phone call and some generosity from a local lake owner and we got to break out the big stick again.

The Hack Attack jig was 3/8 ounce but cast really well on even a heavy action rod with a fast tip. It was a dream to pitch and flip around grass and wood alike. The jig hung very little in the cover. I’d love to say it didn’t hang up at all but to my knowledge there is no jig that comes through cover 100 percent of the time. But this jig did a good job staying upright. Usually when a jig hangs in cover it’s because the jig has laid over on its side. This jig keels well and pulls through cover really well as a result.

The 30-degree straight eye line tie on the hook gives this jig a great pull point for coming through cover but also for getting a good hookset on a big rod swing or just a pressure set with the reel.

The hook we’ve learned is actually a hook borrowed from saltwater applications made to stay strong without any flexing under severe pressure from the angler and the fish alike. The hook point was sharp to start and still felt sharp to the touch after a full day of hooksets and hard fighting bass.  We swung some 4-pound bass into the boat and were pleasantly surprised at how well the hook held up to the pressure and release on boat flips.

We really like the black blue, candy craw, summer craw and Okeechobee craw colors on these jigs. The keeper is lead holder but its sharp angled point, really held trailers tight to the shank in a variety of situations from casting, flipping, pitching, swimming and more.  The weed guard is thick and long, something guys who tweak their jigs will like. So you can customize the weed guard to your personal preference.

The jigs are available in 11 colors and retail for $3.99. The nice thing is they come in sizes 3/8 ounce all the way up to 1 1/4 ounce for punching through heavy matted grass.

This was our first chance to fish the Strike King Heavy Cover Hack Attack Jig but we came away very pleasantly surprised. One experience that showed off the power of the big hook was a cast on a long point. After the jig settled to the bottom. I twitched it. A fish pecked it. I took up slack and the line snapped tight pulling my arms to full extension in the process. All I could do was real and pull back as a huge catfish took off with the jig. I hooked the fish with just a turn of the reel handle as I could not get enough leverage to pull on the rod and set a good hook. When I landed the cat, it was locked up solid and we had to wrestle the jig loose with pliers.

The next bass bite I got, I decided to reel into the fish and just see if I could hook it. Again another solid hook set. A lot of times with big flipping hooks, you feel that you lose some of that tacky sharpness you get with lighter wire hooks. But because this jig is big, you can use big braid and just wrench into the fish and they are locked on with the Heavy Cover jig. That was a huge plus for when you get those quick bites after a pitch and might have the rod out of position to get a good hookset.

No 10-pounders but that wasn’t the fault of this Strike King jig. We feel confident if a 10-pounder bites this jig, it won’t be the jig’s fault if he gets away.