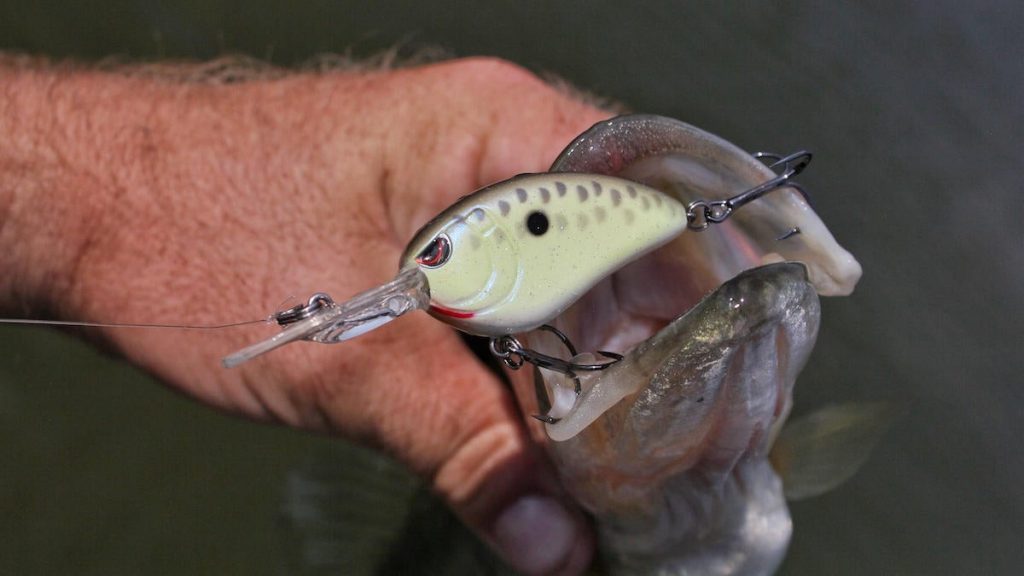 Crankbaits are fish catchers; that’s an obvious statement about one of the broadest genres of lures we have available to us as anglers. To break it down even further then, small crankbaits are particularly good at catching fish… and lots of them. Additionally, small crankbaits give anglers of every skill level something to catch fish with, since the greatest anglers in the world need them at times to get bit and the most novice angler in the world can still simply tie a small crankbait on a spinning rod or Zebco, chuck and wind.

For today’s review, we have run head first into one such little fish catching machine in the SPRO Little John Micro DD 45. So let’s talk about it a bit. 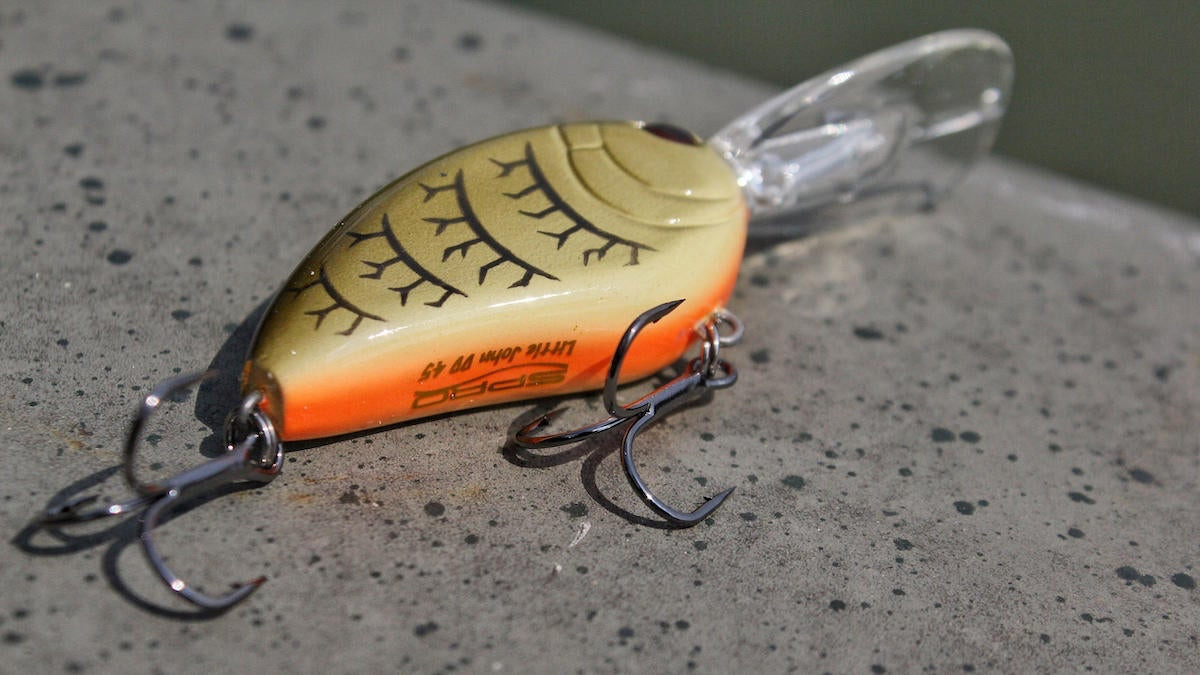 Obviously with Little and Micro in the name, we’re not talking about some monster plug here. But don’t miss the DD either, which stands for “deep diving” because that’s exactly what this bait does. For its size, the SPRO Little John Micro DD 45 gets down deep. With an advertised depth range of 8 to 10 feet, I’d dare to say this bait could get even deeper with light line and finesse gear.

I fished this bait primarily on a baitcaster with 15-pound test fluorocarbon, which honestly was a bit overkill for it. Not that the bait didn’t perform well, but I think 12-pound test would be about all you’d need most of the time with this lure. Even with the 15-pound test though, I was able to launch this little nugget and that led to bumping bottom in the 8- to 10-foot range even with the larger line. Put this little guy on 12-pound fluoro or even on a spinning rod with a braid-to-fluoro leader and you’re going to be able to throw it as far as you’d want to; there’s no need to fight a fish any further.

Good now, gonna be great then 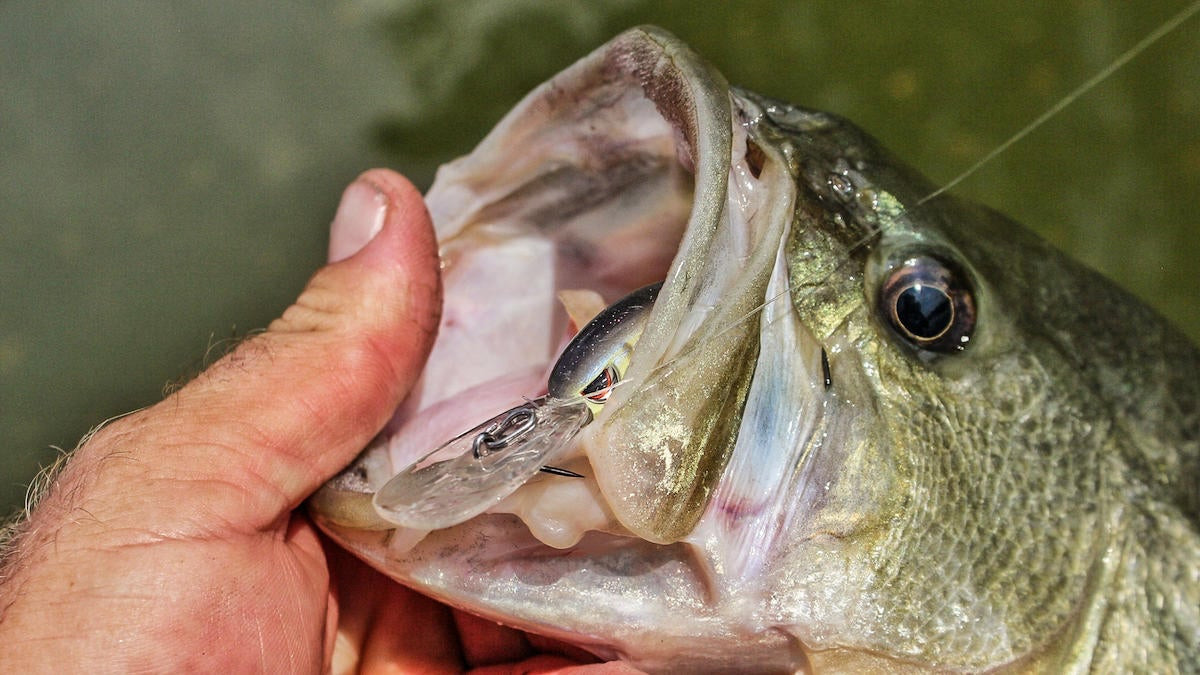 I fished this bait in the summer, as soon as I could get my hands on it. And it caught fish, in particular in areas where I’ve caught them well on a small swimbait/jighead combo in the past, which I thought was interesting and eye opening. But I’m really looking forward to throwing this bait in the fall and winter. During the fall, a lot of the shad are smaller on many of the fisheries we frequent. And the SPRO Little John MD 50 has long been a solid bait for us during that time of the year. But having another flat-sided bait in that same lineup that will dive a little deeper and is 3/4 inches shorter is pretty exciting.

I’m particularly amped up for the winter months when a Shad Rap really shines, because that’s a bait that this lure reminds me of, while still setting itself apart. The Little John Micro DD 45 has flatter and taller sides than a Shad Rap and a different bill to it with a little more top to bottom flash, but it’s a bait that I believe will do extremely well when targeting bass at the same strikezone as a Shad Rap that time of year. I don’t think this bait will replace a Shad Rap for me because that would be hard to do. But it will definitely give me a complimentary bait to show the fish something different when the Shad Rap bite is strong. 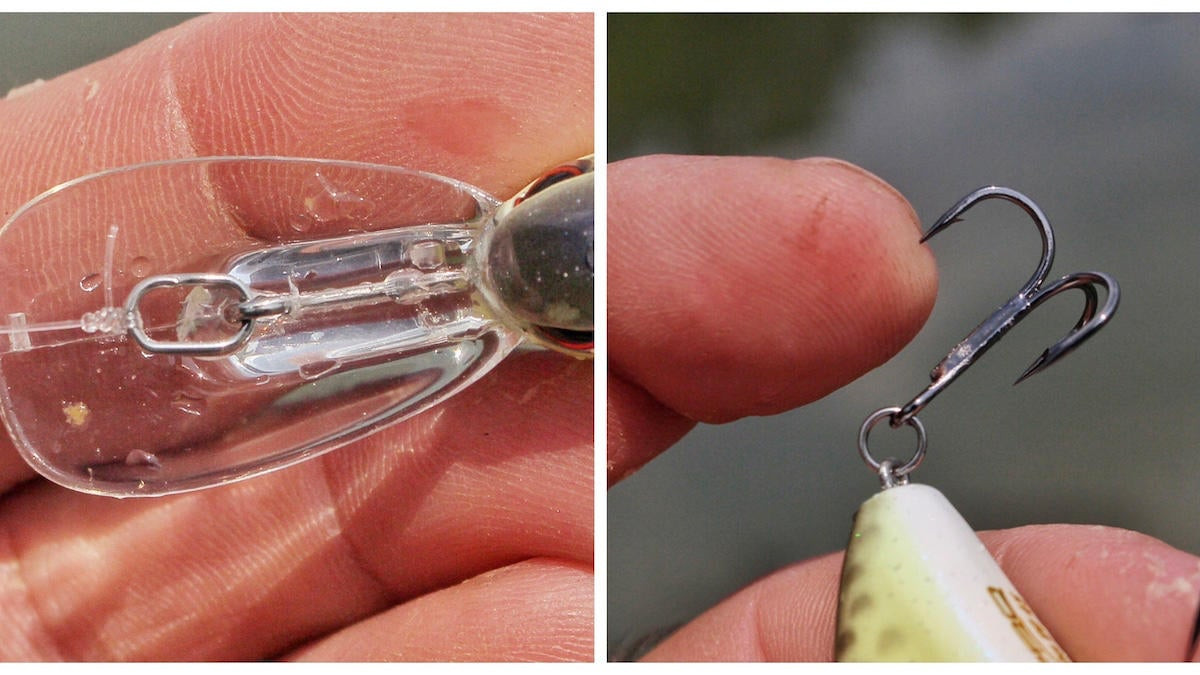 Equipped with thin-wire, round-bend Gamakatsu treble hooks, the Micro DD is definitely a sticky little bait. The oval split ring on the line tie is nice, too. I like oval split rings for line ties versus circle ones because they seem to help the bait run better. The Micro DD certainly runs true right out of the box too but I did notice one thing worth mentioning.

You don’t want to just start burning this bait back as soon as it hits the water. The tendency for many of us with a deep-diving crankbait is to just start cranking on it hard as soon as you start to reel in an attempt to get the bait to dig down to the desired depth quickly. But, burning this bait as soon as it hits the water makes it blowout to the side or do circles. Instead, just simply start reeling the bait at a normal pace and what you’ll find is that it digs deep quickly on its own. It shoots straight down and then you can speed your retrieve up a bit if you’d like and it runs really true. 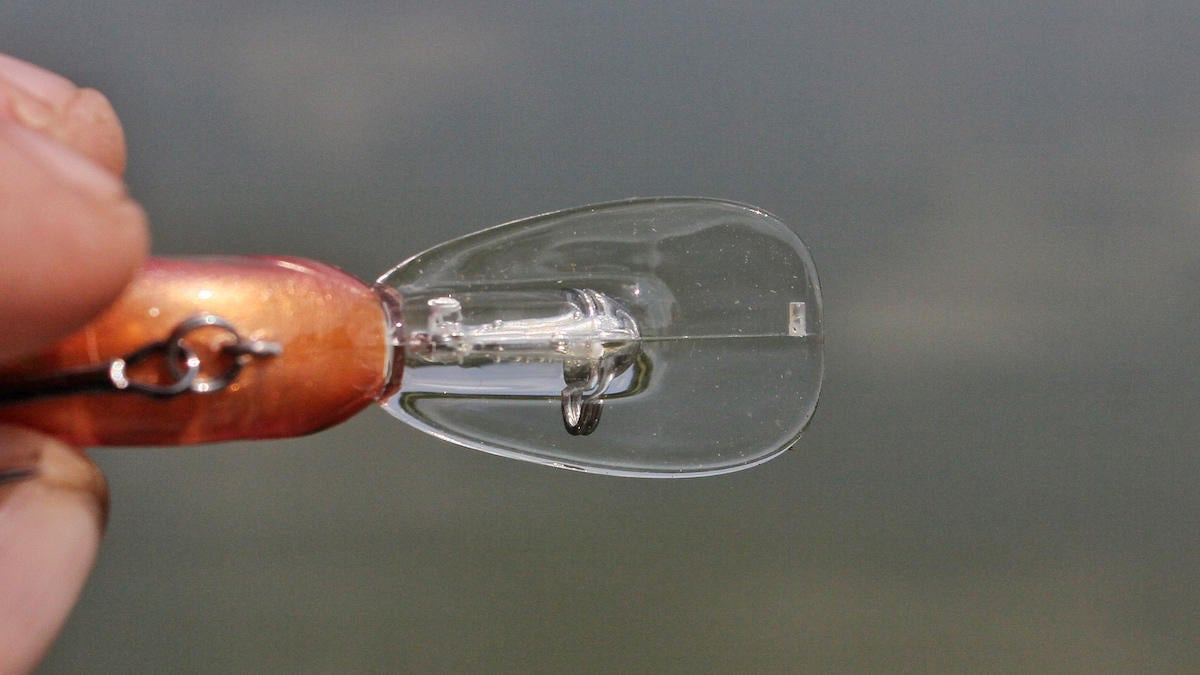 The bill of the SPRO Little John Micro DD 45 is not unique but certainly different from many crankbaits and something we’re starting to see more and more of over the last few years. It’s kind of like a hybrid between the longer bills we’re used to seeing on a deep-diving crankbait, mixed with the squarebill of a shallow-diving bait.

What you get when you mix these two is a bait that dives deep while producing some of the action and deflection off cover we see with a squarebill. This creates a particularly pleasant offering for largemouth bass for some reason. Not that all bass and likely several other species won’t hit this bait, especially at its size. But something about getting the action of a squarebill down to a deeper depth really does a number on largemouth, so the bill design is definitely worth pointing out.

Lots of variety in the colors 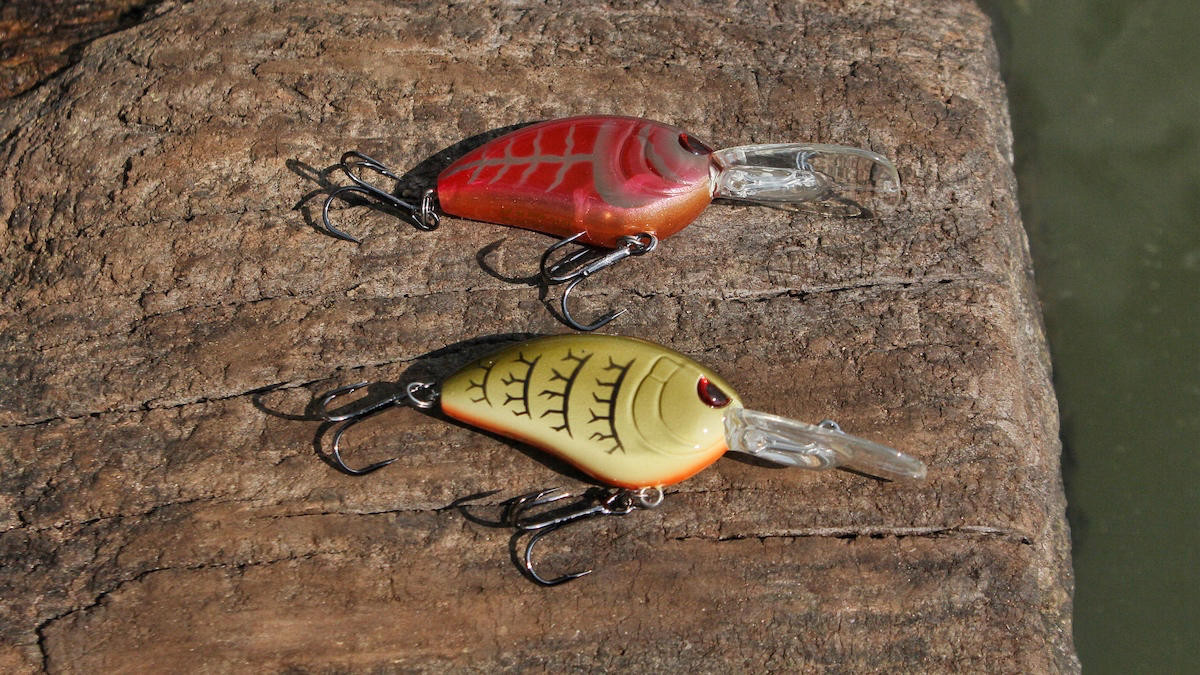 This crankbait doesn’t come in dozens of colors, but the 10 SPRO does offer are a wide variety. I believe this is important with a bait this size and at this depth range because there’s a wide variety of forage it could be mimicking.

You can tie the Micro DD on in the summer and fall in a shad pattern when that’s the primary forage for fish transitioning through the 8- to 10-foot range. Then as the winter sets in and the prespawn starts coming on strong, swap over to a craw color or even transition through multiple craw imitations as the crawfish molt and change colors. Having a wide variety of color options gives the angler something for every water clarity and season. 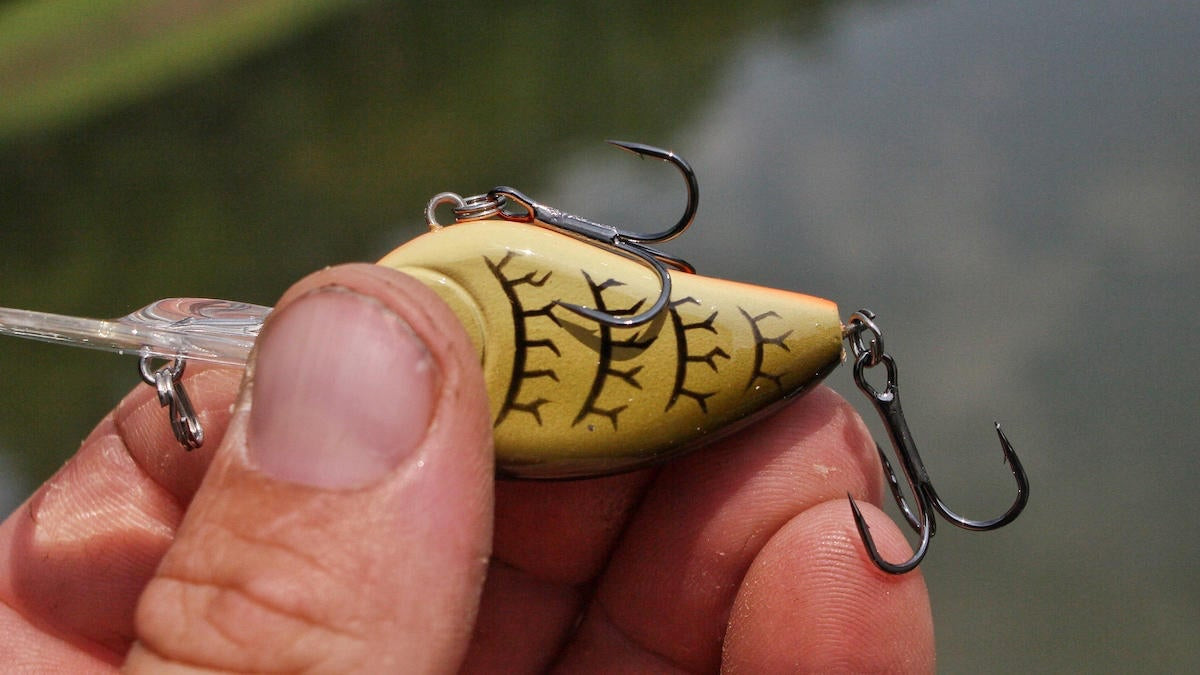 Really impressed with this little guy. It throws well (extremely well for its size), runs true and digs deep (as long as you take your time getting it started), hooks fish well and keeps them pinned, comes in a variety of color and offers a new bait for a strike zone and bite that has long been defined by one particular lure in the Shad Rap. I truly believe this is going to be a magical little fish catcher for a lot of anglers including myself. It’s just a hard little morsel for a fish to pass up.

The SPRO Little John Micro DD 45 is available at the following retailers: