As if the winter months aren’t frigid enough, a cold front can take it to an entirely different level. Already-lethargic bass can get a serious case of lockjaw, cured only by painstakingly slow presentations that drive some anglers crazy.

I, like most anglers, only have a limited amount of time to fish each week, so cold front or not—I’m on the water come Saturday morning. When I’m battling severe cold fronts, I’ve found few lures that produce as well as the Rapala X-Rap. Time and time again, this dude saves my rear end in both guide trips and tournaments alike.

The Rapala X-Rap isn’t a particularly large jerkbait—the XR08 measures 3 1/8 inches and the XR10 measures 4 inches. Years ago when I first started experimenting with this lure, I was a little skeptical of its castability due to its size, but I quickly turned into a believer. 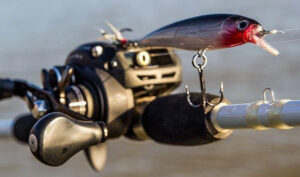 It features a weight transfer system that results in absolute bomb casts. On the back cast, the internal weight slides to the back of the X-Rap, allowing you to launch it into the next county. Whether I’m roll-casting to docks or firing it over long, tapering points, I’ve never had an issue with castability. Jerkbaits are most effective when it’s windy and the X-Rap makes tough casting conditions a total non-issue.

A lot of the jerkbaits I own make a very loud rattling sound—when you hold the hooks close to the body and shake the lure, it sounds like I’m playing the maracas. I definitely catch fish on these jerkbaits, but there have been many instances in which the unique sound of the X-Rap catches finicky bass when they won’t touch another jerkbait. 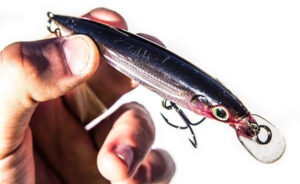 When you shake the X-Rap, you’ll notice a very distinct knock—not a rattle. In ultra-clear water conditions, I tend to steer away from loud lures because in my opinion, they don’t need any extra help locating it. The periodic knock of the X-Rap does a lot of damage in these situations because it doesn’t overpower the bass.

I’ve also had success with this lure on very popular, pressured jerkbait fisheries like Lake Lanier. There will be several times of year in which everybody seems to be launching jerkbaits and at least for me, it makes bite pretty darn tough. By using a jerkbait with a different sound, such as the X-Rap, it has allowed me to ignite stubborn schools of big spotted bass.

Won’t wear you out

I’ll be totally honest with you—if I can avoid throwing a jerkbait, I will. I can get a little stubborn out there on the water and in my mind, why would you wear your arm out while you can throw a crankbait? Unfortunately for us, we can’t tell the fish what to eat, so there are times when I don’t have a choice.

The Rapala X-Rap has really improved my opinion of jerkbait fishing. You can work it for an entire day with very minimal forearm fatigue, which is a huge plus in my book. The angle of the bill minimizes torque and resistance and makes jerkbaiting much more enjoyable. 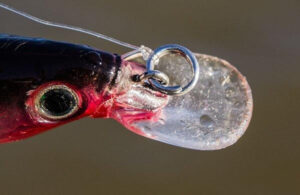 It doesn’t take long to get the hang of using the X-Rap. You don’t have to jerk your arms out of socket to achieve good action—just sharp, downward twitches of your rod tip are all it takes.

One of my favorite characteristics of this jerkbait is that it doesn’t glide too far when you twitch it. A lot of jerkbaits will scoot toward the boat at a fast pace when twitched, but the X-Rap stays in the strike zone much longer. Each time you twitch your rod tip, it slashes from side-to-side while incorporating an awesome rolling action. When a shad or herring is injured, it doesn’t just twitch back and forth—it’s going to writhe and struggle as well and this jerkbait imitates that behavior perfectly. 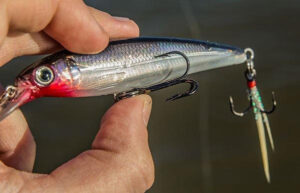 It can be pretty tough to find bass fishing lures that are primed and ready to go straight from the package. Some come with subpar split rings and others come with tinfoil hooks that are just asking for a major heartbreak.

I don’t modify my X-Raps at all before using them. The split rings are as tough as nails and the hooks are extremely sticky. Even after slamming and banging into chunk rock all day, the hooks preserve their sharpness very well.

I haven’t bought a new X-Rap in a while because to be quite honest, I haven’t needed to. The paint jobs are incredible and stand up to hundreds, if not thousands of fish catches. The bill is secured snugly to the body, the eyes stay intact and hook rash is kept at a bare minimum. You can’t ask for much more in a jerkbait.

If you’re looking for a way to fool your sluggish wintertime bass, this jerkbait will do the trick. It’s priced at $8.49 and it lasts for a very, very long time.

The Rapala X-Rap is available at these online retailers: