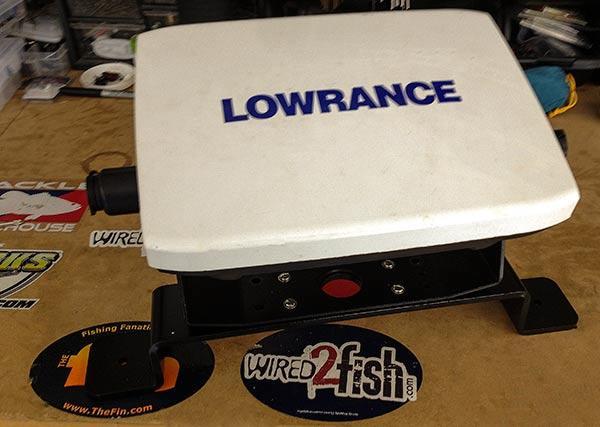 I’m a techno geek. So finding tips and equipment that make using marine electronics on my fishing boat more enjoyable always produces that “warm fuzzy” feeling. Randy Kuhens developed a new Kick’n Bass Guide Service Sonar Bracket for mounting large depth finders on front decks. On my recent install of some new electronics, Kuhens gave me one of his brackets to try and get my opinion for mounting electronics.

Mounting large marine electronics units on the front dashes of a fishing boats have several inherent problems. Those problems can include:

This new Sonar Bracket alleviates most of the issues found with mounting large fishing graphs on your front deck.

I removed the front plate on my Ranger Z520 and after digging out a little of the foam floatation from under the front deck I was able ratchet a couple nuts on some 1/4-inch bolts I placed after drilling holes in the front deck and dobbing with silicone. The bracket was very easy to install, which is always a plus. The bracket itself is extremely sturdy but light and coated with black powder paint so it looks good installed.

I mounted an Lowrance HDS Gen 2 8 to the bracket to start, then later mounted the new HDS Touch 7 in its place. The bracket has holes and a large center cable hole that matches the Lowrance HDS brackets. The large hole manages the cables easily and after bolting down the stand, the units installed in minutes. 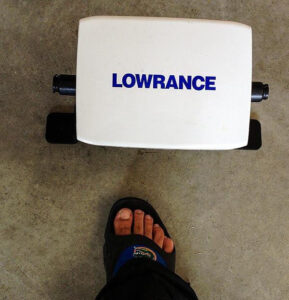 Easy to see at every angle

I angled the unit upward on the front deck as I had the mount situated towards the front of my recessed trolling motor pedal tray, center of my front deck. This gives you a view viewing angle on your unit when you’re leaning on a butt seat or standing on the deck without a seat. The cables come out of my recessed tray and straight into the unit with the HDS Touch 7 because of the angle I have the unit facing on the deck. It’s nice because very little cable is out on the deck and it’s neatly out of the way.

Since the unit is mounted somewhat over the recessed foot pedal tray it’s really out of the way and dead center in the boat so the graph is easily visible whether I’m fishing off the left side or the right side of my bow.

But to me the single biggest improvement on this bracket as opposed to other types of brackets is how sturdy it is mounted. You can grab the mount and pull the whole boat back and forth on the trailer.  And because you set it up one time, it’s in place and doesn’t move again. No worrying about having to lock down an extended arm constantly or having your graph fold down on your trim switches in rough water. Yes that has happened to me.

You can mount the Lowrance or Humminbird brackets to the Sonar Bracket and use Locktite on your bolts to secure your brackets together. Then add some electronics locks to the outside of the brackets and you’re locked in place.

The bracket retails for $60. You can pick one up at HITEC Outdoors or order them from PrecisionSonar.com. 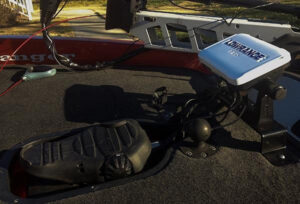