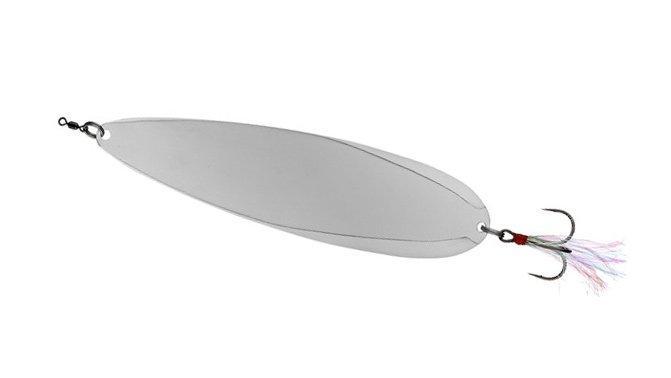 I like big spoons. A lot. I’ve been throwing a bigger spoon than most for a couple years. I thought it was cool because it was big. But, I really didn’t know what big was until the Nichols Ben Parker Spoon hit the market last year. It came out right as anglers descended on Kentucky Lake for the FLW Tour. We talked a little bit about its impact then in our current trends article in 2014. But since that time I’ve been able to fish and review the spoons on our own.

There are several things that immediately stand out about the spoons. And it’s not difficult to ascertain that these spoons won’t be for everyone or work everywhere you bass fish. But where the bait is large, the bass are aggressive and the competition is fierce, these things are a heck of a lot of fun.

Here are some aspects anglers will want to know about these spoons before buying:

The fishermen in me says the bigger the bait the bigger the fish. That’s definitely not the issue here. The Ben Parker Magnum Flutter Spoon is 8 inches long and weighs 3 1/2 ounces with a 3/0 hook. Yes 3 1/2 ounces is larger than most bass anglers have thrown short of our big swimbait heaving brothers out west. But surprisingly, it’s not completely overwhelming.

I was able to cast the spoon pretty well making long casts to deep schools of fish on Kentucky Lake. As you would imagine it will throw pretty far in calm weather and gets to the bottom quickly. In the wind, however, you will find the bait doesn’t always fly with pinpoint accuracy. Because you lob this spoon rather than whip cast it, it will occasionally catch and slide in the wind. But I found I could throw it straight into the wind most of the time without issue. 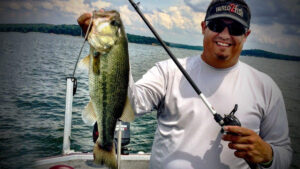 You won’t want to throw it on a rod shorter than 7 feet or lighter than a heavy power. I tried it on a 7-foot, 6-inch heavy flipping stick but liked it better on an 8-foot swimbait rod. It’s big and more rod backbone and length seemed to make it a lot easier to manage and fish. I stuck with 20-pound fluorocarbon or 20-pound monofilament. The spoon has a swivel built into it to alleviate line twist. So if you have a strong rod with heavy line you should be fine. 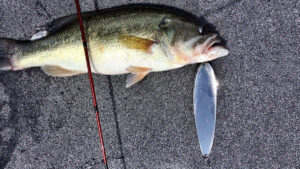 Fish it hard and fast

I found it interesting that the spoon actually seemed more effective the more violently you worked it. I tried fishing it with sweeps and pulls and caught some fish. But I caught a lot more big fish really ripping the rod hard and snatching the spoon up and letting it sink back quickly. I think the big fish are simply reacting to a very large aggressive baitfish in their living room.

So you’ve got to get after it to make the spoon more effective. A longer, heavier rod makes this task a little easier on you. But it’s extremely effective. I also recommend checking your knot often and the first few feet of line as well. There is a lot of torque on the spoon and it will bang against the bottom repeatedly. 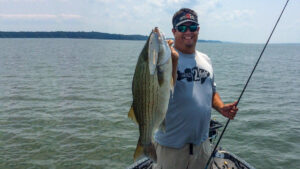 The big Ben Parker Magnum Flutter Spoon will get lots of bite out of one school. When you get a bite, I found it best to reel hard, and as the rod begins to load, swing into them hard. You have a tendency to rip the spoon up with a high rod then watch your line as it falls back, lowering your rod just behind the slack. You don’t want tension on the spoon. When you get a bite you might feel a tick, but often you see it when your line jumps.

The natural tendency is to rip the rod back up to set the hook. I found this does hook a lot of fish but it seems like you don’t always land them this way. I found with this big spoon, I like to reel and then set into them.

Landing them is another thing. With the big Magnum Flutter Spoon it seems like either steady tension without horsing them to the surface will work as does the exact opposite. Where you run into issues is when a big fish comes to the surface and throws its head back and forth. When that happens, a 3-ounce weight banging against their head will allow for some fish to get loose. If you can fight them slow and not force them to jump or wrench on them so hard they can’t get leverage to throw their head, you have a much better landing percentage.

I didn’t get to fish the spoons in the prime of the ledge season, but I caught a lot of fish on it for several weeks. I’m excited to really wrench on the bass with it this ledge season. I’m also interested to see what it can do slow swimming in cold water, and maybe fished more aggressively in shallower water as well.

It seems that it shares a lot of the same applications as big swimbaits. An 8-inch lure is an 8-inch lure, especially when it’s 2 inches wide. That’s a big meal for a big bass, but 2- and 3-pound bass readily ate it in those big post spawn and summer schools.

It’s a big, fun way to fish. I can see some absolute giants getting caught on this bait this year in the right situations.

You can find them here at tacklewarehouse.com and also at local retailers that carry Nichols spoons.