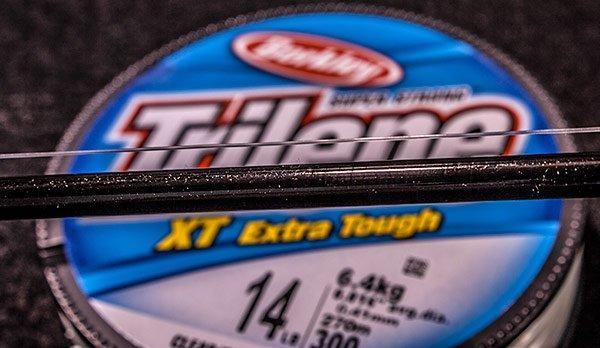 The folks at Trilene never rest on past successes. Their goal is to produce the best products at an affordable price that allows anglers to have an excellent experience on the water. They take angler feedback and work on a daily basis to improve every line they bring to the marketplace. Whether it’s a member of their pro staff or a consumer who speaks to them at a boat or tackle show they take that information very seriously. From the feedback they received they took it to heart and just re-introduced a new Trilene XT and did so by adding some new elements to make it more manageable but yet not lose the toughness it was noted for.

We have been testing it recently, for about 2 weeks, throwing both buzzbaits and spinnerbaits on baitcasting gear and we believe they have it dialed in this time around. We have been testing the 14-pound test line that has an average diameter of 0.016 so it’s thin as well as tough. The outer coating seems very smooth and slick. That adds to the abrasion resistance as it slides through wood and rock equally well.

Trilene XT is touted as a good line for both baitcasting and spinning gear.

One of the knocks on old XT was it was too rigid and coarse. It also had a tendency to cut if a small loop ever occurred in the spool. The new XT is in a different class. The new line lays on the spool nicely, casts a mile with good abrasion resistance. Fishing it around hedge and hickory blowdowns can be tough on most line but we have not had any break offs or noticed any frays with the line. We also noticed the knot strength is much improved.

Initial spooling is a good indicator of the lines softness and suppleness. This line spools on easy and even throwing a line twisting buzzbait, we have not noticed it losing its pliability. We have been using the clear line and have had some vicious strikes and zero failures. Trilene XT does have some memory after being on the reel for a period of time but seems to lose it after use. The softness of the line is the key difference between the old and new XT.

“We have had a dedicated following with Trilene XT for years but wanted to improve it to give anglers an even better experience,” said Mark Sexton, long-time designer for Berkley. “We tested this line for several months, making changes as we went along, and after several iterations, finalized the new XT. We believe those that liked the old XT will love the new more flexible and abrasion resistant Extra Tough.”

Although we have been fishing through and around sparse cover with moving baits we believe anglers will also like to use it in brush piles, grass and lay down trees equally well. It should be perfect for flipping and pitching as the shock strength is comparable or superior to other monofilament in its class and price range.

It’s available at OmniaFishing.com, Tackle Warehouse and will retail for around $8.00 for a spool of 300 yards. If you like to fish mono on moving baits, the new Berkley XT is a high quality offering that provides confidence and fish catching power combined in a single product.