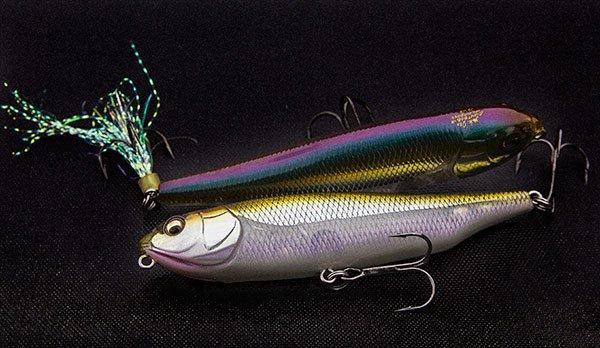 It puts you in a trance â€“ the metronome cadence of a walking bait clicking and clacking back and forth across a placid lake. Then the eruption awakens you from your drunken stupor as you lose all track of time and thought and instinctively rear back with all your might on an unleashed beast.  How could you not love that instant infusion of adrenaline. It’s what draws us all to topwater fishing for bass.

The original walking baits took a bit of skill, timing, precise hand movements and some carpal tunnel. Today’s walking baits offer a lot more options and easier application of this deadly technique with precise accuracy. Flipping requires discipline and repetition to master. So did walking topwaters until recently. Now it seems a few baits make fishing them a lot easier.

We really enjoyed reviewing the Giant Dog X from Megabass. But we’ll have to back up some and give credit where credit is due. Our buddy Gene Eisenmann, of Hydrowave and Amphibia fame as well as being a touring angler to boot, pulled me aside at an event and told me he was wrecking fish on a topwater and that I needed to get several. So I heeded the advice of a friend and grabbed a couple of the “hush hush” baits â€“ Giant Dog Xs â€“ last fall.

My first outing with them was for schooling fish. I know not much of a test as I’ve seen schooling fish eat topwaters without any paint on them.  But on the flip side I’ve been completely unnerved on a few evenings when the bass seemed to completely ignore every topwater I was throwing. This was one of those evenings. I tried several poppers, a few walkers, even a few prop baits with a fish here and fish there. But with so many nice fish schooling, I was miffed by the notion that they weren’t coming in the boat on every cast.

I heard my conversation with Eisenmann replaying in my head again and decided to dig those Megabass topwaters out of the box. I also decided I would add a little flare to the back treble with some added Mylar because the first thing I noticed about the bait was how it sat down in the water. Whenever possible, I like to taunt bass with a little added attractant that just pulsates in their face when a bait is at rest. I think small cues like that can turn following bass into biting bass. 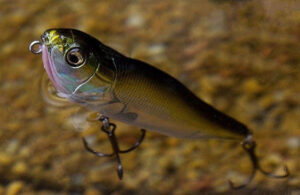 So with the Giant Dog X and added tail attractant, I started firing on the warring bass. The bait casts a mile because of rear-positioned tungsten balls. It flies tail first which is narrow and aero dynamic when flying in reverse.  The bait sat down and I let it sit for a second. BOOSH! A bass pounced on it before I could even move it. Okay. Not really a test as much as a fluke on a first cast like that.

I unhooked and released that bass and sent the bait sailing once again. This time I got three downward wrist snaps. BOOSH! Fish No. 2 in a matter of seconds. Okay this is looking up now. Third cast I got about 10  feet from the initial splash and â€¦ BOOSH!

Is it a magic bait? No. Does it have some properties that make it unique. Absolutely. The first thing we talked about was how the bait is weighted. The two rear weights plus the belly weights make it sit nose up, tail down in the water. It also makes the small bait very easy to cast a long way, enabling you to give a nice profile in clear water while staying way off the fish.

They call it a Giant Dog X but the bait is just shy of 4 inches and weighs just 1/2 ounce. Hardly a giant. But the key is not that it has a huge size but has a pretty large action. Not only is it moving left to right on a good cadence, but it’s whipping its tail up and down because of its weighted posture. So it slashes, ducks, darts  and cuts as you work it. It also rolls a bit on the side so you give the fish more of that side flash as it darts back and forth. 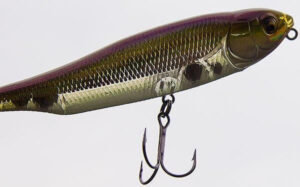 Probably the biggest allure to the lure for me was not only the beautiful finishes on the bait which I’m convinced matter in clear water, but the fact that it starts its walk from the first twitch. Some baits because of how they sit or how they are weighted are hard to start walking on a long cast. The scoot and slide on the surface and you’ve moved the bait several feet before it starts darting. I like with the Giant Dog X, it starts walking almost immediately on the first rod snap. That can be a big deal when you’re trying to stay off of the fish and hit them near or around specific targets say like the edge of a grass line or around a dock post.

The bait comes in about 25 colors and Tacklewarehouse.com has about nine of the most popular colors in stock now. They come with sharp  Owner hooks and the hook and line ties are solid on the baits. No rough paint edges or burrs anywhere on the bait.

I’ve since caught a bunch of bass on the Giant Dog X and pull it out often when I find the topwater bite a little tough or the water a little clearer than I like it. It’s a great option with a lot of good components that enable you to make a good presentation, even in tight quarters. 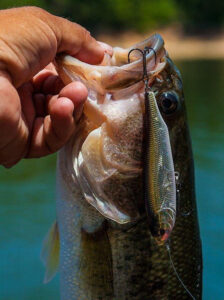 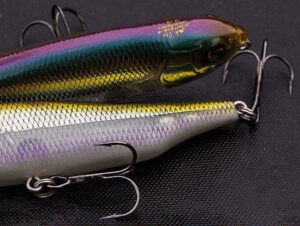 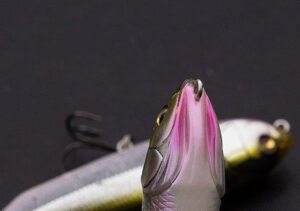 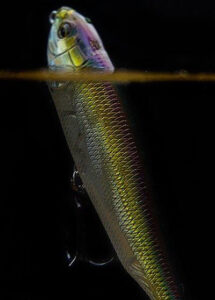