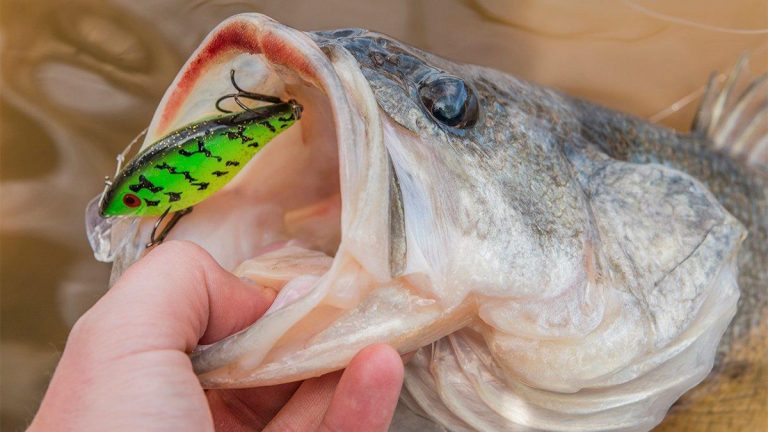 I’ve been hearing about the Luhr Jensen Speed Trap for many years; it’s one of those old-school lures that has an extremely loyal following. People have told me how it’s the “secret” practice lure in many professional anglers’ tackle boxes due to its ability to catch fish in almost any condition.

I finally got the gumption to try ’em out for the past few weeks and I’m certainly glad I did. I’m super picky about my crankbaits and without question, this little plug will have a designated place in my boat throughout the entire year.

There’s nothing more irritating than a crankbait that won’t run true. You can try to tune ’em, but some crankbaits are so out of whack that nothing will help. This often stems from small irregularities at the connection point between the bill and body of the lure.

The Luhr Jensen Speed Trap runs true regardless of your retrieve speed. As the name implies, these lures are designed with a fast retrieve in mind, and you’ll be impressed by quickly you can fish them. They don’t blow out when you’re burning them, so they’re an excellent choice when the bass are finicky. I’ve actually found that an ultra-fast crankbait retrieve can be an excellent remedy for lethagic bass behaviorâ€”I believe it ticks ’em off more than anythingâ€”and thats what makes the Speed Trap so effective.

They also deflect off of cover quite well for such a small lure. You’ll have a lot of success burning them over shallow flats, bars and points. They rarely get snagged on such cover, which is hugely helpful when you’re targeting shallow-water bass. You won’t have to mess up “the juice” very often by retrieving a snagged Speed Trap. 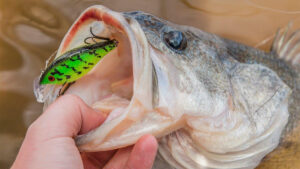 Most importantly, these lures flat-out catch fish. The Speed Trap has real potential to be one of your new go-to lures throughout the year. I’ve racked my brains recently trying to figure out exactly why they catch so many fish and as far as I can tell, there’s something really special about the high-pitched rattles and the tight shimmy of the lure. A large majority of the bass I’ve caught on the Speed Trap have absolutely choked it and who knowsâ€”it might be because very few people throw them anymore. I’m a big believer that bass become conditioned to the sounds and vibrations of the more popular crankbaits.

When I first received my package of Speed Traps, I was significantly worried about the clips to which you tie your line. A 6 or 7-pound bass puts a ton of pressure on your tackle and I was skeptical as to whether the clip could hold up to multiple big fish catches. But after several nice fish catches on this lure, I haven’t had any problems with the clip. I’ve noticed no bending or breaking whatsoever.

I believe the addition of the clip allows the bait to hunt a bit more throughout the retrieve and gives it a much wider range of motion than traditional line ties. I’ve added an oval line tie to several of my baits for experimentation, but I haven’t noticed an increase or decrease in production.

Without a doubt, there’s something special about this lure in terms of fish-catching ability. I’m of the belief that its streamlined profile is the biggest factor. I can’t overstate the importance of fast retrieves when you’re cranking. Conventional wisdom tells us to slow down when the bite gets tough, but time and time again, I’ve discovered the complete opposite. If you give a bass too good of a look at your plug, they have a chance to decide not to bite it. But if you burn that sucker right past their nose, it’s like a human swatting a flyâ€”it ticks ’em off and they react to it. 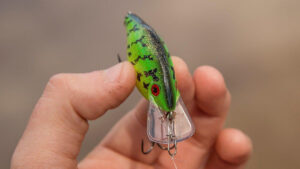 The Speed Trap allows you do get under the proverbial skin of big bass like very few can.

I do, however, recommend changing the hooks on these lures before fishing with them. The original hooks are pretty flimsy and not as sharp as I prefer; the split rings are a little weak, too. I spent about an hour changing every hook and split ring before testing my Speed Traps. It’s a bit of an inconvenience, but their effectiveness makes it difficult to complain about it. 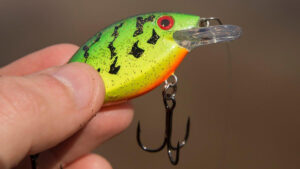 Lastly, I love the color options that are available. The detail doesn’t blow my socks off, but the base and accent colors all combine for a nice, sharp contrast that aids in getting aggressive reaction strikes. Tackle Warehouse has the biggest color selection I’ve found thus far, with 30 colors from which to choose. 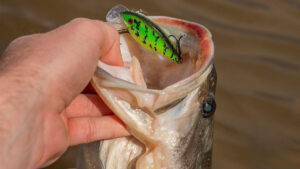 They’re not the sexiest lure on the market, but they absolutely work. Whether you’re attempting to cover water and establish a solid pattern or desperately searching for a bite when the action is slow, the Speed Trap has proven itself throughout my testing.

The Luhr Jensen Speed Trap is available at TackleWarehouse.com.