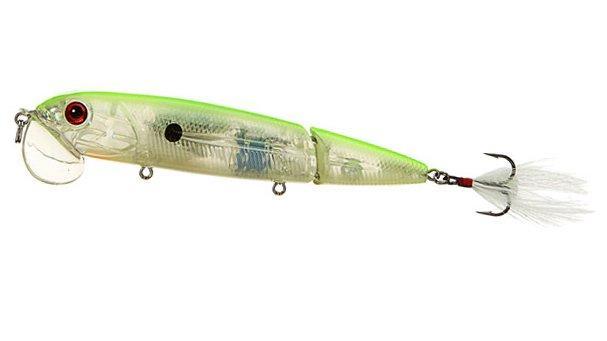 Fall is one of my favorite fishing times of the year because there is usually a great topwater bite. That being said, I’ve had a chance to play with the new topwater lure the Livingston Lures Walking Boss II lately. A neat lure that has several different ideas built into it, and the fish have already shown me that it’s something to which they respond.

What Livingston Lures baits are most known for is their sound technology. Microchips in each bait emit sounds like live baitfish to draw curious fish in for closer inspection. That technology has been revamped to offer multiple sounds in one bait with the EBSMT sound technology and Advanced Rattle System. With EBSMT, you can pinch the line tie and the front hook simultaneously to cycle through 4 different sound options.

But in the last couple of years Livingston Lures pros have been designing some unique baits that are becoming popular fish catchers and taking their designs outside of just the sound technology for which they have come to be known. 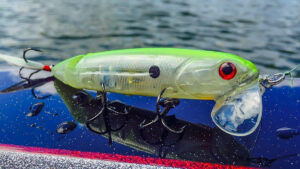 I was a little skeptical, I’ll admit, when I got the first Walking Boss II in the mail. It’s like a cross between a Jitterbug, a walking topwater, a jointed swimbait and a waking crankbait all in one lure. It’s a lot to take in at first glance. But the first time I dropped it in the water, I was impressed.

The paint jobs have come a long ways in the last few years for Livingston Lures as well and the Walking Boss features a nice mix of finishes for the bait. The vibrations from the Advanced Rattle System are noticeable and that’s a pretty neat feature when you want to stop a topwater bait and let it quiver a second. 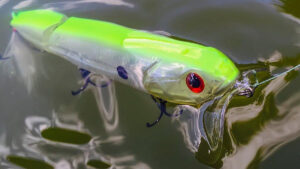 The Walking Boss II weighs about an ounce and is just longer than 4 1/2 inches. It’s a good sized bait that displaces even more water to give it a large fish attracting presentation in the water.

The bait does a lot of different stuff on a retrieve and it’s almost like having two different topwater lures with a fast retrieve versus a slow retrieve.

On a fast retrieve the lure throws water like crazy left and right from under that clear front lip. It slithers side to side making a froth on the surface. I found it very effective around submerged grass.

The slow retrieve causes the bait to gurgle steadily along with a nice subtle bubbling noise and nice v-wake on the surface. 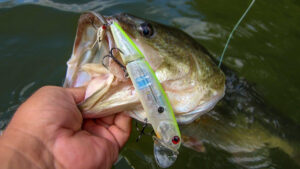 You can cast it a mile on braid. I fished mine on 65-pound New Vicious Braid with great success. I’ve thrown it quite a bit now and I love it already. It has caught a lot of bass already and was very effective fishing it around grass and open water alike. I like that it swims, gurgles, throws water and leaves an V-wake on the surface. I can see where this bait will be very effective in a lot of situations. You can pause it and let the EBSMT and vibration technology do their thing as well.

Overall I think this is a very cool topwater with a lot of upside. I liked the bone, GC777 and Sexy Melon colors the best for where I fish. But I didn’t think they had a bad color in the lineup. You can find the new Livingston Lures Walking Boss Part II on Tackle Warehouse, as well as other retailers that carry Livingston Lures new lineup of baits. 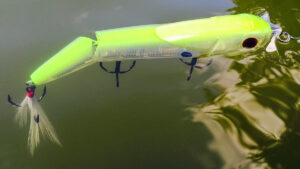