In a world ruled by technology, we’re expected to be available at all times. Whether it’s your wife, husband, kids or boss calling, you need to have an operating cell phone. I can’t stand having the dang thing on me as much as I do, but it’s just the world we live in. With that being said, I have darn near obliterated every cell phone I’ve ever had. Whether I drop it in the water while I’m fishing, smash it in the woods climbing out of a deer stand or fastball it into the entertainment center when the Braves tick me off, I have a questionable history with nice things.

I’ve been testing out the new LifeProof nÃ¼Ã¼d iPhone 5 Case and I’ll be straight up and down with you””it’s the best cell phone case I have ever used. After several months of use, I’ve had no shattered screens, broken buttons or any loss of sound quality whatsoever.

Slim profile
I don’t hate many things, but I positively hate when my phone gets stuck in my pocket and I can’t get it out. I’ve had some bulky phone cases in the past that require baby oil, a miniature panic attack and a rain dance to pry out of my pockets, but the LifeProof nÃ¼Ã¼d is super-slim and makes my life easy.

Regardless of the lining of my pockets, I can remove my phone without a single problem. This has been especially useful when I’m wearing raingear or fishing bibs with fleece-lined pockets. If I’m out testing fishing gear and one of the Wired2Fish guys calls, I can keep my fishing rod in one hand and whip the phone out with the other. It’s the simple things in life, right? 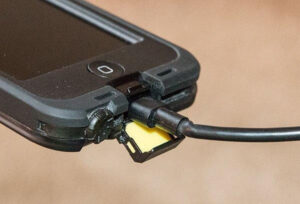 I don’t do the whole iTunes deal, but I love some Pandora radio. While I’m rigging up for a guide trip or idling around looking for schools of bass, I frequently plug my headphones into my phone and rock out. The problem with many other cases, however, is that the dang things wouldn’t fit.

The LifeProof nÃ¼Ã¼d works excellently with accessories. It comes with a headphone adapter that allows your original iPhone headphones to fit perfectly into the port. I just keep this adapter in my boat and I’m ready to go.

This case also makes charging extremely easy. The charging door closes very tightly, but doesn’t break your fingernail off when you open it. The original iPhone charger still fits into the phone, so you won’t have to go spend a bunch of money on a new, “case-friendly” charger.

No worries about screen responsiveness 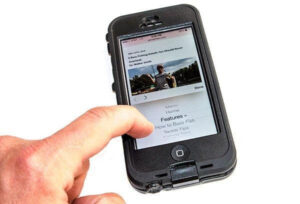 I’ve had several iPhone cases that make using the touchscreen nearly impossible. If you need to swipe, you’re almost batting your phone across the room and if you have to press an icon, you’re basically punching your phone until the screen breaks. LifeProof, however, got it right with the nÃ¼Ã¼d.

Get this””the screen doesn’t even have a cover on it. With your phone enclosed in the case, you have full, direct access to the screen. And before you wonder, the answer is yes””it’s still waterproof. It has a super-tight seal around the entire screen.

I was initially kind of curious as to how the screen would be protected upon an impact, but the case is raised around the edges of the screen, which recesses it. For 99.9 percent of instances, I’m sure this will protect your phone. If you happen to drop it screen-down on a jagged rock or something, well that’s just bad luck. 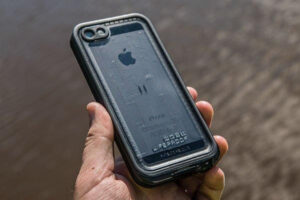 Ever seen someone with a big ol’ phone case try to watch a funny video or something on their phone? Their eyes are squinted, their hands are cupped around the speaker area and the bottom of the phone is jammed halfway down their ear canal.

The nÃ¼Ã¼d doesn’t mess with your iPhone’s existing call or audio quality. You can hear very well throughout each conversation, the other party can hear you clearly and the external speaker volume is excellent. I have noticed, however, that opening the charger door will definitely increase the external speaker’s volume when watching videos or using the speakerphone option.

Most importantly, the LifeProof nÃ¼Ã¼d does exactly what it’s meant to do””it protects the heck out of your phone. It’s fully submersible up to 6.6 feet, totally sealed from dirt (pollen in my neck of the woods) and can survive drops over 6 feet high. I really don’t know what else you could expect or want from a phone case.

So far, I’ve unintentionally put this case through its paces. I’ve dropped it in an anthill while getting the mail, launched it off my lap and onto concrete while getting out of my truck, opened my truck’s toolbox with it on the lid, absolutely soaked it in my pocket while bagging fish before a weigh-in and accidentally left it on my back porch for six hours in the peak of pollen season. And guess what? The phone and the case still look brand new.

Is it worth the money? 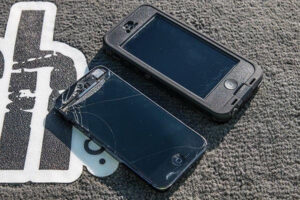 The LifeProof nÃ¼Ã¼d costs $89.99 and is absolutely, without a doubt worth every penny. I’ve been making some jokes throughout this article, but let’s be serious””cell phones are ridiculously expensive and as technology advances, they seem to get smaller and more fragile. Both of which are bad combination for outdoorsmen like you and me. We need something that has some guts to it.

I have had six iPhones and I’ve wrecked “˜em all and paid a lot of money to replace them. I haven’t managed to even scratch this case yet, so that’s all the proof I need. This is a very worthy investment that will save you money in the long-run.

If you want to fish without worry of your phone screwing up, grab one of these cases and put it on. I did and I wish I had done it much, much sooner.

The LifeProof nÃ¼Ã¼d iPhone 5 Case is available at LifeProof.com.