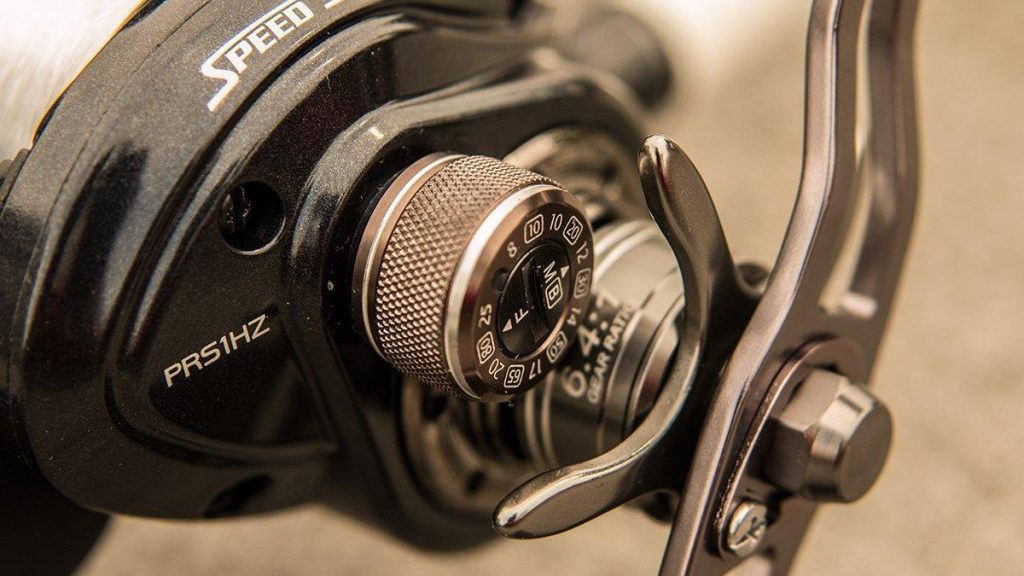 For the last several months, I’ve finally had the opportunity to test one of the newest reels in the Lew’s lineup. I’ve been looking forward to this particular model ever since it was announced and after many hours of fishing time and lots of abuse, I can comfortably say that it was well worth the wait. This reel certainly lives up to the hype.

The new Lew’s BB1 Pro Speed Spool offers several significant improvements from the previous model and I’ll take you through the most noteworthy attributes of this high-end bass fishing reel. 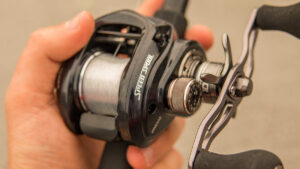 I’ve been a little wary of the super lightweight movement that’s been happening in the reel industry. Of course, we all want lightweight reels, but many that I’ve tested have been a bit underwhelming. They’re certainly comfortable to fish with, but several of them haven’t had the guts I prefer for my shallow-water, power fishing style.

The Lew’s BB1 Pro Speed Spool, however, has managed to achieve an outstanding blend of weightlessness and power. It weighs just 6.5 ounces, but it still has a incredibly solid feel to it. The tolerances are tight and there is no wiggle room whatsoever. It has a once-piece aluminum frame and graphite side plates, so it doesn’t have a cheap feel. I have beat it up in rough water in my rod lockers, thrown it into my kayak and hauled it around in the bed of my truck and it feels just as sturdy as the day I got it.

I’ve also been impressed with the strong drag system. I can lock it down when I pitch and flip heavy cover and it won’t let a single millimeter of line leave the spool, regardless of how hard I set the hook. From my experience, that’s a tough attribute to find in a 6.5-ounce reel. 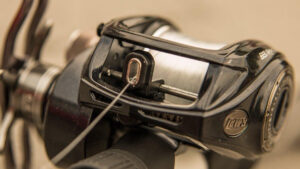 I own a few of the older BB1 Pro Speed Spool reels and although I’ve been happy with them, I did notice that they became a little noisy after a few months of use. The casting distance wasn’t affected, but after I caught a few big stripers on one of ’em, they’d get a little loud. With this newest iteration of the Lew’s BB1 Pro Speed Spool, however, I’ve noticed a huge difference.

This is definitely one of the quietest reels I’ve tested – there’s no question. I’ve purposely caught some of those same big stripers with this reel and it has held up wonderfully with no added noise to speak of. The casts are smooth and you won’t hear any type of grinding or grit throughout the retrieve. In my opinion, this has been one of the most noticeable improvement upon the previous model.

Backlashes are no worry 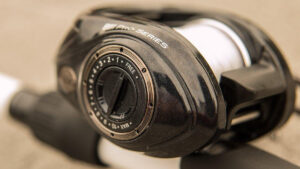 I’ve always been a fan of the adjustability and ease of use that Lew’s products provide and to be quite honest, this model is no different. It features an externally adjustable 6-pin, 27-position braking system that they’re calling the QuietCast system. Both the brake dial and tension knob make very prominent “clicks” with every adjustment, which help you keep track of any small adjustment you might make when changing between lures or presentations.

This makes for a very easy tuning process straight from the box. I’ve lost count of the reels I’ve tested that take upwards of 20 to 30 minutes to set up correctly. This hasn’t been the case with the Lew’s BB1 Pro Speed Spool. It’s currently one of the least temperamental reels in my collection. It took me approximately four or five casts to get it dialed in correctly and I was chucking a lightweight Shad Rap in no time. 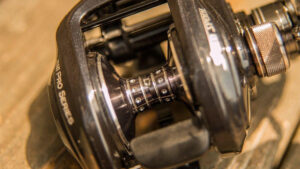 This reel has an oversized spool that I’ve found to be quite convenient for techniques that require a long cast such as deep cranking, walking topwaters and frog fishing. I’ve been testing the 6.4:1 gear ratio model and is holds an impressive 160 yards of 12-pound test. I cover water very quickly when I fish, I’m not much of a “dragger”, so I try to bomb as many casts as I can throughout a day of fishing. When using lower capacity reels, this often causes me to reach my backing knot at the end of a long cast which can really tear up my thumb at the end of the day. If you get bit at the end of a long cast and you’re already at your backing, you can get in a tough spot without much line to give the fish during the fight.

I haven’t even come close to the backing with this reel, however. I really like knowing that I have plenty of line on the spool at all times, especially if you accidentally hook into a rough fish that takes you for a ride. 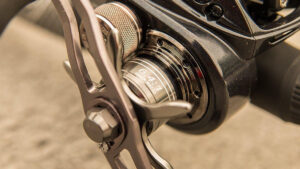 This is something different that I don’t think I’ve ever seen on a baitcaster for bass fishing. When a fish strips drag on this reel, it actually clicks similar to a spinning reel. It certainly takes a little getting used to, but if I’m honest, it’s growing on me pretty quickly. I’ve found these audible clicks to be pretty helpful when fighting a fish – especially when one makes a strong, boat-side run. There’s no guesswork involved and I’m able to hear the second that the reel starts dispensing line. I’ve never had to manually strip line during the fight and the drag system as a whole is remarkably smooth.

Not to mention, the Lew’s BB1 Pro Speed Spool also comes with 20 pounds of max drag, so it also has plenty of shoulders to handle big fish. 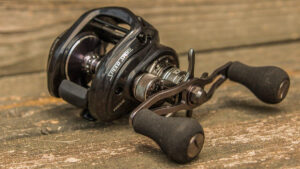 This is a very impressive reel and I can easily see it getting a big following. If you like to chuck-and-wind like I do, I’d definitely suggest putting one of these reels in your hands. You’ll quickly see what I’m talking about.

The Lew’s BB1 Pro Speed Spool is available at TackleWarehouse.com.