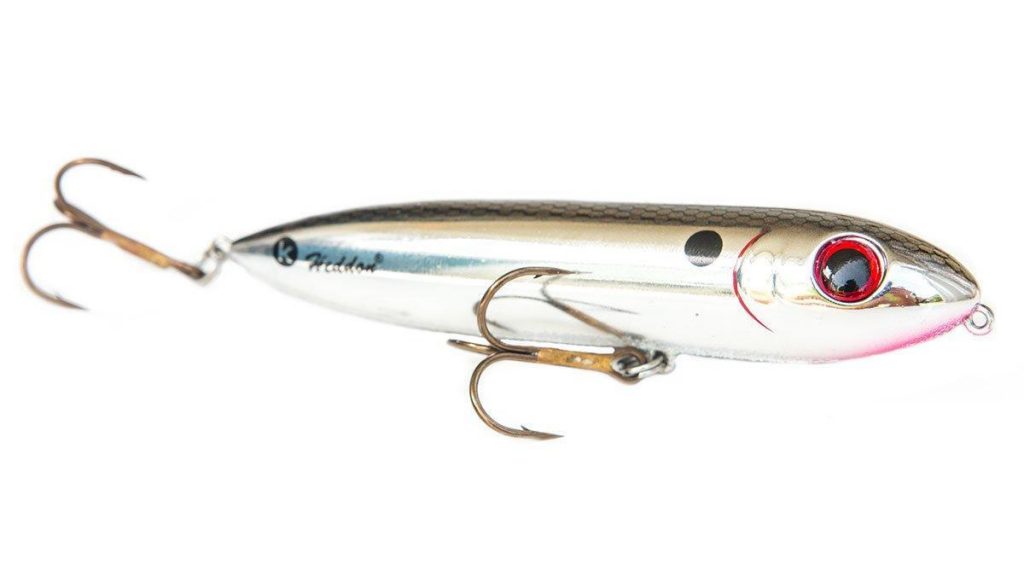 There’s something about a huge bass exploding on a topwater lure that will never get old to me and I’d like to think most anglers would agree. I’ll take a fish catch any way I can get it, but callling a bass to the surface and taking it away from its “home” is simply fascinating.

Of all the topwaters on the market, the Heddon Spook remains one of the most popular. First introduced in 1939, this walking topwater lure has caught countless bass for both recreational and professional anglers alike. So I guess it goes without saying that I have a bunch of ’em that I’ve collected since I was a child.

For the past several months, however, I’ve been having an awesome time fishing with the Heddon One Knocker Spook. At first, I’ll admit I was a bit wary of it because I was afraid it would be like a lot of movie seriesâ€”the first one’s always great, but the sequel usually leaves a lot to be desired. I didn’t want to ruin my perception of the Heddon’s Spook lineup if I didn’t like it.

But I decided to give it a shot and I’m glad I did. It maintains the most important characteristics of the original, but Heddon also improved some features and came away with a killer topwater lure.

A lot of topwater lures sound the same; like you’re rattling a maraca at a Cinco de Mayo festival. Sure, they catch fish. But think about how often bass hear that familiar sound. I’m a firm believer that they do, in fact, become conditioned to more popular sounds and profiles over time. Time and time again, I’ve enjoyed a noticeable increase in my catch by simply changing profiles or sounds.

The Heddon One Knocker Spook has been working wonders on the pressured bass in my area lately. They’re pretty shaken up right nowâ€”the pleasure boaters are stirring things up and a bunch of anglers are on the water enjoying the nice weather. They’re in a funk and are pretty darn hard to catch. 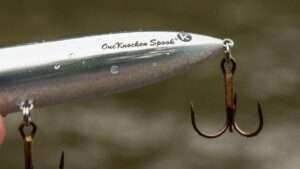 This model has a very distinctive “clapping” sound as it walks back and forth due to its single internal tungsten rattle. It’s not the high-pitched rattle you’re likely used to. With each downward twitch of the rod tip, it “claps” a single time and you’ll be able to hear it, even at the end of a long cast. It’s really loud.

I’ve done a lot of experimenting in regards to the effectiveness of this unique sound. I’ve had some opportunities to fish deep brush lately and I’ll start out by throwing a generic-sounding walking topwater with a high-pitched rattle. When the bass come up and roll on it without getting hooked, I’ll wind the lure in as fast as I can and immediately pick up the One Knocker Spook. More times than not, I can hook those bass on the very next cast. In my opinion, it’s all because it’s something different from what they normally hear. They might have problems committing to the more familiar topwater lures, but something about that loud “clap” pushes them over the edge enough to attack it. 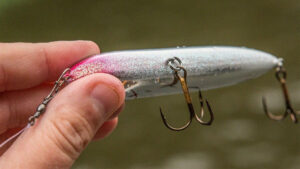 Additionally, the sheer volume of this single tungsten rattle has allowed me to get away with fishing a topwater lure in fairly rough weekend conditions. Choppy water isn’t always ideal for this technique because it can make it difficult for the bass to accurately track your lure. While I have had some misses and short strikes in these situations, I’ve been pretty impressed by how well the bass can hone-in on the One Knocker in rough conditions.

I haven’t cut open a One Knocker Spook because, well, I only have a few and I like ’em too much. But if you hold it alongside an original Spook, there’s something different about the balance. It’s hard to explain, but I’ll certainly try my best.

It’s similar to a crankbait that has a weight transfer system. A ball moves around inside of the crankbait throughout the cast, which makes long casts much more attainable. Although I can’t quite put my finger on it, that seems to be the case with the One Knocker Spook throughout the retrieve. It’s feels a bit heavier when you twitch your rod, but it’s the same weight as the original. So I’m led to believe that they slightly changed the positioning of the internal rattle chamber to facilitate an easier walk-the-dog action. 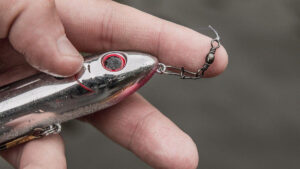 I can see this being advantageous to all bass anglers, but especially those who aren’t quite comfortable with walking topwater lures. If you’re new to the technique, you’ll be able to walk this lure with minimal effort. I’m willing to bet you’ll get it down-pat halfway through your first cast.

It’s also worth noting that the One Knocker Spook rarely fouls on your line throughout the retrieve. This is a common problem for a lot of walking lures, but I’m of the belief that this lure’s especially wide walking action combats this issue. It’s really easy to get the right cadence going, so you always have suitable tension to keep the front treble hooks free of your line.

Measuring 4 1/2 inches and weighing 3/4-ounce, this is a pretty big topwater lure. And much like its cousin, the original Spook, the One Knocker will allow you to make some pretty ridiculous casts. I’ve even started rigging this lure on a high-capacity reel so I don’t come so close to my backing. 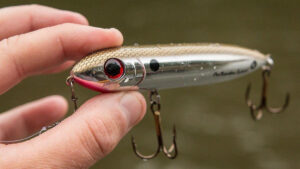 Much like the weight transfer crankbait comparison I made in the section above, I think the single tungsten ball improves your casting distance considerably. It rolls to the tail-end of the bait on the back cast before launching to the front of the bait as you start your forward motion. Even in high winds, I’ve made some casts that have literally made me giggle. They made me feel like I was an all-star!

Because efficiency is such an important factor in topwater fishing, this extreme castability is a major “plus” for the One Knocker Spook. With just a few long casts, you’re able to cover a considerable amount of water in a short amount of time. Not to mention, this lure maintains the same streamlined profile of the original Spook, so you’ll rarely have any issues with twisting or twirling while the lure is airborn.

I really don’t like to say that anything I review is a “must-have” because you can catch a bass on an old nightcrawler if you needed to. But I will say thisâ€”if you like to fish a lot of topwater lures throughout the year, this one would be well worth adding to your collection. I like it a lot.

The Heddon One Knocker Spook is available at TackleWarehouse.com. 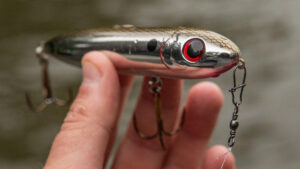