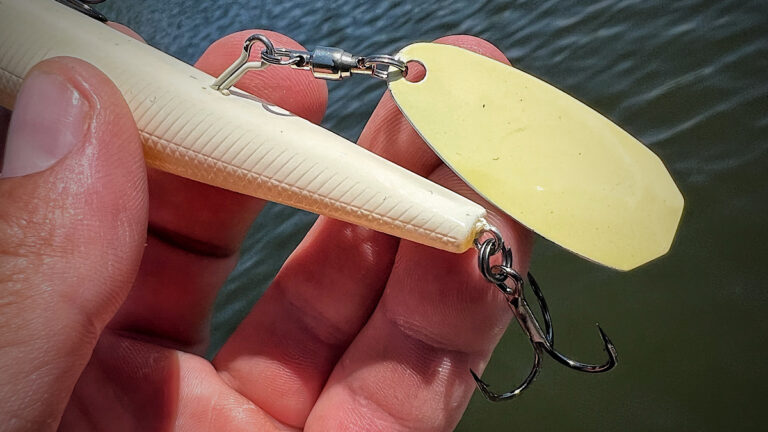 I’m a big fan of topwater bass fishing lures and the post-spawn period is certainly a great time of year to take advantage of this bite. As the bass come off their beds, you’ll begin to see a variety of baitfish start their spawning process. The bass, which are hungry and looking to bulk up after a strenuous spawning season, will be targeting these spawning baitfish.

Shad and herring spawning early in the morning and bluegill beds throughout the day will provide great opportunities for the bass to fill their empty bellies. Topwater lures are perfect for targeting bass as they try to capitalize on the distracted baitfish. There are lots of topwaters out there suited well for this type of fishing and today we’re going to be looking at one with a little different spin on it: the Freedom Tackle Mischief Minnow. 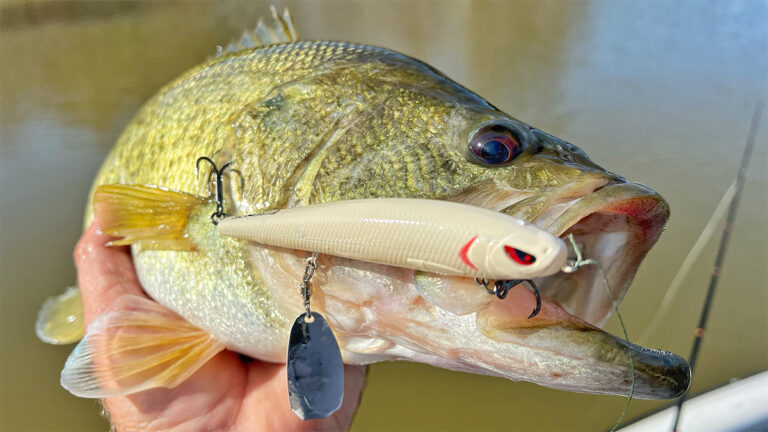 Starting with the most obvious difference right out of the gate, the Mischief Minnow has a blade attached to the belly of the bait between the hooks via an eyelet and a swivel. The blade is able to spin as the bait is worked or reeled in, creating a flash that’s quite unique compared to other topwaters. What I like more than the flash, however, is the sound this blade makes.

There’s a clanking-type sound generated by the blade as it bangs up against the body of the lure and the back hook. Because the blade is knocking off the bait and not really spinning freely, there’s no rhythm to the sound or the flash. The sound and the flash are a little more irregular and sporadic, which I actually like as well. It makes me think of the look a spinnerbait blade gives off when I pump my rod tip. It’s more of a fluttering than a consistent spinning, which better imitates an injured baitfish. 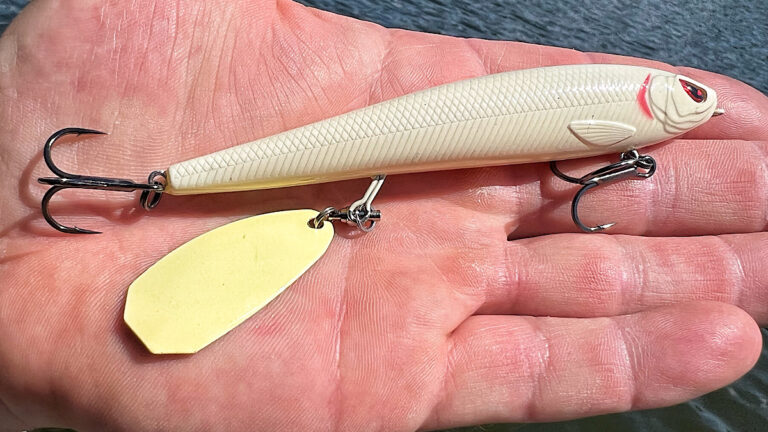 You can walk this bait side to side, but that’s not really the way I personally fish it most of the time. To me, this bait is better suited to be reeled straight in. This makes the bait fish similarly to a wakebait, with a subtle rocking left to right as the blade clanks along beneath the bait. If you have a fish wake on the bait but not bite it, it might be a good idea to pause it and walk it back and forth a bit, but typically I like to just keep it moving to generate a slow and steady wake.

When fished this way, it makes me think of a finesse substitute for a Whopper Plopper or another reeling-style prop bait. The Mischief Minnow isn’t nearly as loud as a Whopper Plopper but that’s what makes it a good substitute if the fish are just boiling on a Plopper and not eating it.

The Mischief Minnow is less aggressive but still has a lot of drawing power as it wakes along and the blade flashes and clanks on the belly of the bait. So this is a great bait to parallel banks with and fish through treetops, same as you would a Whopper Plopper or other topwater. It just gives you something quite different to try. 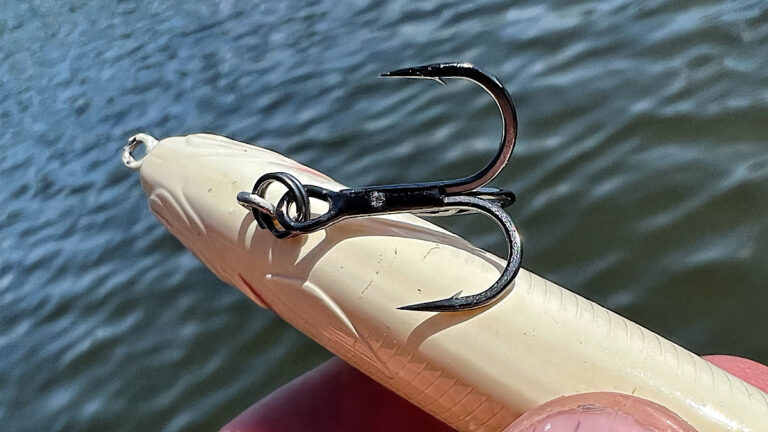 The Mischief Minnow comes stock with a quality set of round-bend Gamakatsu hooks. Round bend hooks are a good selection for a bait like this. Not only do they hook a fish well if it actually eats the bait, but the wide gap from the round bend also does a good job of sticking a fish if it’s simply swiping at the bait to try to run it off or stun it.

This bait comes in two sizes, a 3 1/2-inch version as well as a 4 1/2-inch version. I tested out the larger of the two and it’s not too big by any means. A great size bait for catching keepers as well as triggering strikes from big ones. I would be interested in trying out the smaller bait as well, as it might work better when fishing around smaller baitfish, like shad in the fall, for instance.

Depending on where you shop, this bait comes in several color choices. There are 4 colors available on Tackle Warehouse and 15 options in total if you buy direct from the American Baitworks site. There you’ll find several of the color selections come with painted blades to match the colors of the baits. And then some of the more natural-looking color choices have plain silver blades attached to them. 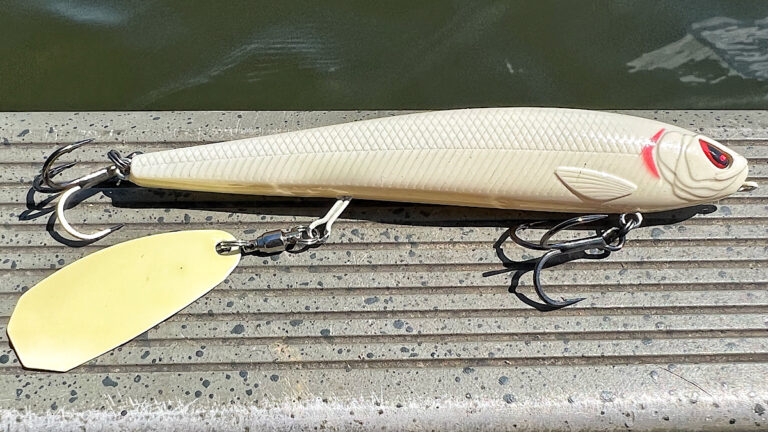 Freedom Tackle did a good job with the Mischief Minnow in coming up with something just a little bit different. I’ll admit at first glance, I thought the blade on the belly looked a little gimmicky but it only took one cast to raise my eyebrows a little. The clanking sound of the blade is unique to anything else I’ve personally fished with and gives a subtler alternative to the Whopper Plopper-style baits, while still being more aggressive than a simple walking-style bait or wakebait.

With a good set of hooks, two sizes to choose from and a bunch of color choices, the Mischief Minnow is a pretty cool bait in my opinion and one worth trying out if you’re a fan of topwater fishing and looking for something a little different. What I like most is that you can simply tie it on, cast it out and straight reel it in and the bait does all the work. Fished this way it has a great wobbling, waking action with an intermittent clanking sound and flash from the blade. This makes it an easy bait to fish that still offers up a lot of action.

The Freedom Tackle Mischief Minnow is available at these online retail partners: