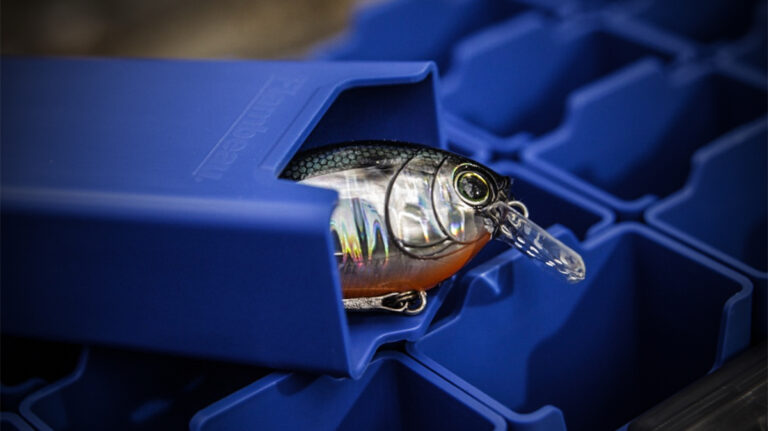 As I’ve said many times before, I’m a crankin’ fool. I love to catch a bass any way possible but if you gave me a choice, I’d catch big bass on crankbaits for the rest of my life. This strange obsession has resulted in me collecting a lot of crankbaits throughout my life; if I find a good deal on one, I normally buy it without much thought. One issue I continually encounter, however, is the paint and finish getting knocked off of my plugs while in storage. Whether you’re transferring your crankbait tray to from your boat to your truck or your buddy’s boat… apparently they go through a fair amount of abuse throughout the year.

Last year, I was introduced to a fairly intuitive storage design for my crankbaits. Flambeau developed something called the Crank Bank and it was a much different storage system for crankbaits when compared to other options on the market. Being an old-school guy, I had my reservations about it but I decided to give it an honest chance for the last year to see how it stood up to my more traditional method of storing crankbaits.

After having the opportunity to use it a bunch, I wanted to share my thoughts on its features. Hang with me for a minute or two and I’ll share what I’ve learned about it so far. 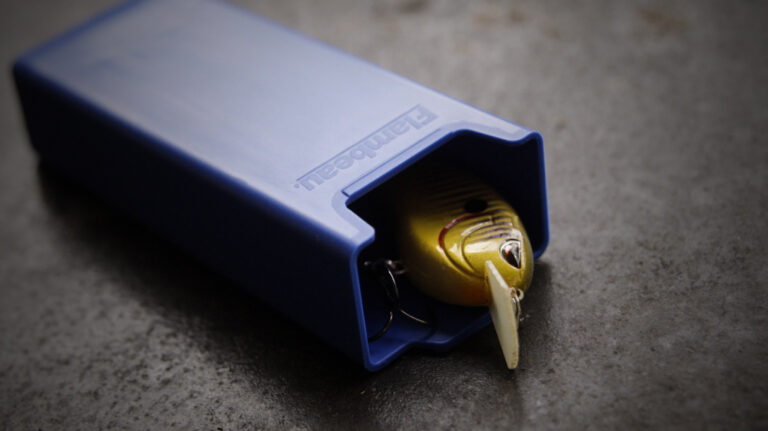 The Flambeau Crank Bank is much different than you’re likely used to when it comes to crankbait storage. Most of us are used to stuffing ’em in a crowded tackle tray and spending a bunch of time shaking and jiggling ’em in an attempt to untangle them from one another. This new system, however, incorporates 24 removable cups that provide super quick access to individually stored hard baits. The premise of this design was to eliminate obnoxious tangles and unnecessary hook rash.

I’ve found the Crank Bank to be quite useful for storing my favorite and “special” crankbaits. Whatever crankbaits I use most often are most likely going into one of these containers. Not only do these removable cups protect some of my more expensive hand-painted baits but they also allow me to change crankbaits very quickly. I’m not having to mess with treble hook tangles and all of that stuff… I just grab one of these cups, dump the crankbait out onto my front deck and retie.

This particular design seems to work best for shallow and mid-depth crankbaits. From what I can tell so far, this box will fit anything smaller than a Rapala DT16 crankbait. Once you get up to those big, deep-running plugs, you’re going to have a hard time getting the lid shut. I’ve also tinkered with shallow-diving jerkbaits and they also seem to work quite well in the Crank Bank.

I’ve been a huge fan of Flambeau’s Zerust technology for a long time. The Crank Bank has an enhanced level of Zerust VCI vapor technology that’s somehow in the entire box… not just the aforementioned removable cups. This stuff releases some type of vapor that doesn’t allow metal surfaces to develop rust for at least five years.

All of that sounds really fancy and I’m sure it is; but all I can go by is my personal experience. I’ve been using Zerust for years and not one time have I noticed a single speck of rust or corrosion on anymore of my hooks, split rings or other metal hardware. It doesn’t stink and there’s no nasty residue left on your favorite baits. It’s just some sort of magic blue material that keeps your most expensive lures in pristine shape for years at a time.

In addition to this Zerust technology, the drain holes on the bottom of the removable cups further assist in your fight against rust and corrosion. You can cut a crankbait off your line, shove it right in one of these cups and it won’t have a bit of moisture or corrosion on it the next time you need to use it.

One of the best waterproof seals I’ve seen 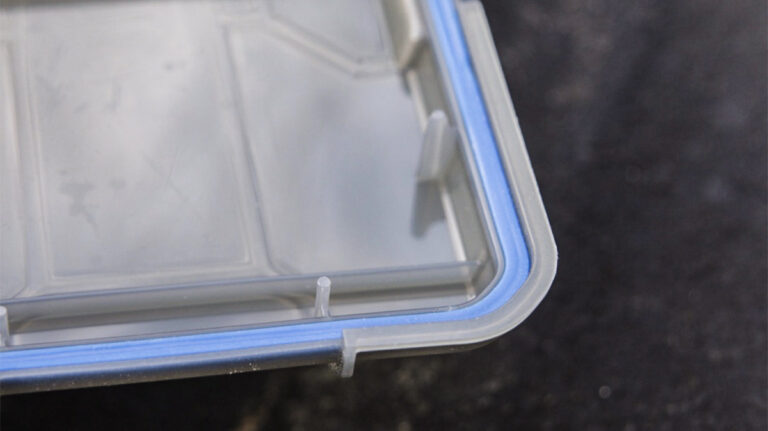 As we’ve discussed, unwanted moisture during storage is your worst nightmare when storing expensive bass fishing lures. I’ve tested a bunch of boxes that claimed to be waterproof but proved otherwise after just a few fishing trips.

One of the first things I noticed about the Crank Bank was the waterproof silicone gasket and three compression cam latches. Not only does the lid close incredibly tight but it’s also pretty tough to open once you undo the latches. It’s certainly not anything that will be a hindrance on the water but the firm seal lets me know how impenetrable this box is to water. In my opinion, you won’t have to worry about any type of moisture issues when you’re using this box.

Don’t let the name fool you

The name “Crank Bank” definitely lends itself to a crankbait storage box but don’t let the name fool you. I’ve actually discovered that this box is an outstanding frog storage option as well. The silicone legs and plastic bodies of hollow body topwater frogs are well known for degrading over time and the Crank Bank’s design really helps extend the life of them.

The drain holes we discussed earlier are definitely a big help for keeping the legs in good shape but the removable cups are also the perfect size for most average-sized topwater frogs. I wrote an entire article about this a few months ago, if you’re interested in learning more.

If you have some important hard baits you need to protect, I absolutely suggest grabbing a Crank Bank or two. The only downside I’ve found is that it can be difficult to see what crankbait is in each cup without dumping it out first. Maybe if the cups were clear, it would be a bit easier to find exactly what you’re looking for. But again, I think that’s a very small price to pay for the peace of mind knowing that your favorite baits are going to remain in pristine condition for years to come. This is an outstanding idea and I think a lot of folks are going to find some really creative and awesome ways to utilize these boxes.

The Flambeau Zerust Max Crank Bank is available at TackleWarehouse.com.