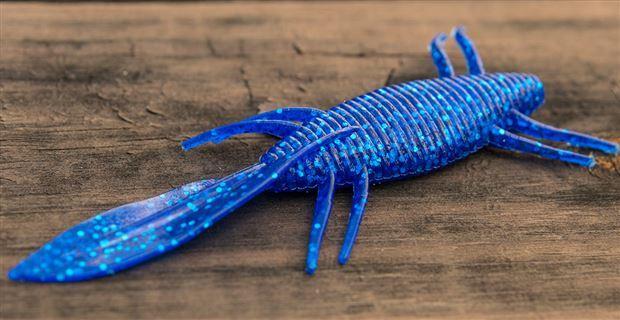 Truth be told, a lot of the soft plastics I test each year never make it into my regular lineup. I have confidence in a core group of baits and it can be hard to find noticeable innovation in the soft plastics market. Why would I fish with an imitation when I can fish with the original?

I didn’t quite know what to think when I first saw the Yamamoto Sanshouo. It’s a strange looking bait and I wasn’t sure how I was going to apply it in my fishing. After several months and a lot of tinkering, however, I found it to be a definite fish catcher. 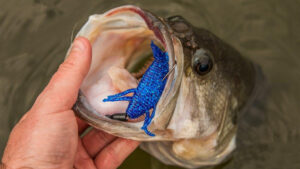 This bait is made from extremely soft and supple plastic, just like the rest of the Yamamoto lineup; it feels very much like a Senko in your hand. The composition of the Yamamoto Sanshouo gives it a lot more action than these photos will lead you to believe.

I have used this bait on both Texas and Carolina rigs, while also utilizing it as a trailer on vibrating jigs, swing head jigs and flipping jigs. Each application has further opened my eyes to its underwater action. 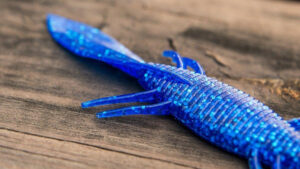 When fishing this bait on the bottom, the large majority of my bites have occured while I was hopping it. It has a fall similar to a tube, as it glides unpredictably after each hop. It can imitate a salamander, a bluegill or a crawfish depending upon your local forage species. It’s important to watch the slack in your line while fishing the Sanshouo because a lot of your bites will happen as it’s falling. When you see your line jump or tick, don’t waste any time before setting the hook.

It also falls very slowly due to its high salt content, which makes it a good choice when you’re trying to catch big bass in tough conditions. It has a rather bulky profile, but this slow fall on a lightweight Texas rig seems to coax nearby bass on high-pressure, bluebird days.

The big tail of the Yamamoto Sanshouo kicks like crazy on the back of a vibrating jig or swing head jig, as well. I’ve also enjoyed using it on a jig when skipping docks; the large surface area of the body allows for easy skips into tight places. 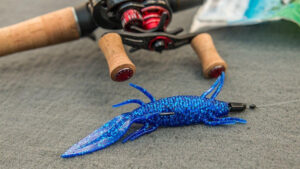 I’ve come to expect rigorous quality control from Yamamoto, so the bar was set pretty high when I began my testing. I can’t stand when all of the baits in a package have different amounts of flake and various hues. I want to be able to blindly pick a bait with the confidence it will look identical to the others in the bag.

The color consistency of the Yamamoto Sanshouos I’ve tested have been darn near perfect. Each bait has the same color pattern and amount of flake, so I haven’t had to waste a bunch of time looking for an acceptable combination of the two. 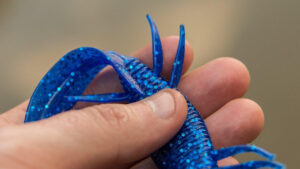 In order to achieve this level of action, you’re going to sacrifice some durability along the way. This isn’t the most durable soft plastic I’ve tested, but it’s hard to knock because it catches a bunch of bass.

It holds up fairly well to skipping and pitching, which cuts down on a lot of irritation throughout a day of fishing. I’ve been catching two or three fish per bait, so I have a tough time complaining too much about that.

This is a solid flipping bait and if you frequent pressured fisheries, I could see it doing very well because the fish have probably never seen a similar bait. I also think it’s going to be an outstanding option for bed fishing in the spring months.