For whatever reason, many anglers think all braided line is the same. I’ve tested almost every type of braid on the market throughout my career and I can’t say it enough: It’s all different, just like any fluorocarbon or monofilament you’d purchase.

I’ve been testing Vicious No-Fade Braid since early September; at the time of this writing, that’s four full months. After using it for flipping, frogging and other topwater applications, I believe it deserves major attention from anyone who relies on braided line throughout the year.

Vicious pulled it offâ€”they created a braided line that will not lose its color. This is a big deal that will surely turn heads in the fishing industry.

How I tested it

Most braided lines will hold color for a few fishing trips. After extensive use, however, many of them begin to fade and turn an off-white color. That’s why you see so many products and how-to articles aimed at restoring dark color to braid. It’s harder to get bites when the fish can see the line connected to your lure.

I made a concerted effort to use this line each and every time I went fishing. I love flipping and frogging, so this wasn’t a problem. I made hundreds of casts nearly every week for four months without re-spooling this line.

Because prolonged exposure to sunlight is also a major contributor to color fading, I took the reel off of my frogging and flipping rod and put it outside in the direct sunlight for days at a time in an attempt to accelerate any potential fading. 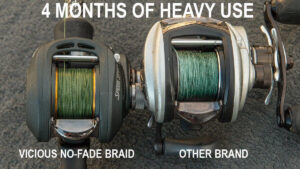 After doing everything I could think of to make this line fade, I was unsuccessful. It doesn’t just resist fading or fade slower than other braided linesâ€”it will not fade. After four months, the 60-pound Vicious No-Fade Braid on my reel is the exact same color as a brand new spool.

Regardless of the conditions or fishing technique, I never even got the slightest bit of green color on my thumb when fishing with this line. Even when spooling the line on the reel there was no sign of color loss.

To the angler, this tranlates to more casts without re-spooling which will save a considerable amount of money over time.

I was happy to see how well this line behaved on the reel. Even after pulling hard to free my frog or flipping hook from a snag, it resisted any “digging” which allowed me to quickly make another cast without manually stripping line from my reel. The same can be said for hooksetsâ€”I was able to set the hook hard, unhook the fish and keep casting without any cinching on the spool.

This line was a bit stiff for the first few trips, but it quickly softened and became more manageable. I’ve been on a good bite skipping toads underneath boat docks and have experienced very few backlashes while making these complex casts. 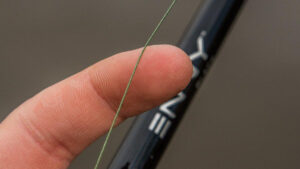 It’s amazing how many 60 to 65-pound braided lines I’ve tested that will snap like a twig on the hookset. That’s a deal breaker for me and rest assured, the rest of the spool goes straight into the trash.

This Vicious No-Fade Braid has been flawless thus far in regards to strength and abrasion resistance. I’ve caught lots of fish while using it and have not experienced a single break-off in four months. It’s incredibly toughâ€”exactly what a braided line needs to be.

I’ve also thrown big baits such as the 2 3/4-ounce Whopper Plopper with it and a basic Palomar knot has held up to the excessive weight without any issues to speak of.

I don’t get wowed by fishing tackle easily, but this line has sincerely exceeded all of my expectations. It’s tough, manageable and has not faded even the least bit in four months of heavy use. I’m not sure what else you could ask for.

Vicious No-Fade Braid is available for pre-order on TackleWarehouse.com.