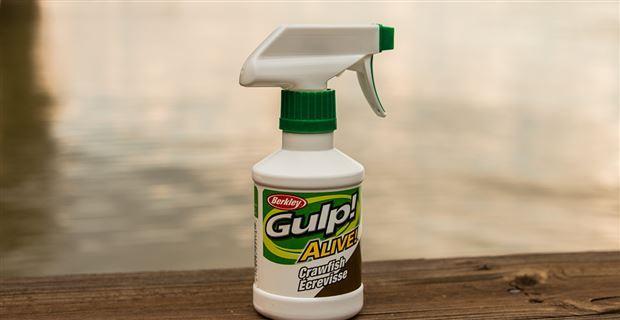 I’ve become a pretty big believer in fish attractant sprays over the years. The name can be a bit misleading because I’m still on the fence regarding whether they actually “attract” fish to your bait, but I certainly believe they can make fish hold on longer before setting the hook.

For the last year or so, I’ve been using Berkley Gulp Crawdad Spray quite a bit whenever I’m pitching or flipping soft plastics. There have been several instances in which this spray has greatly reduced the number of short strikes throughout a day of fishing.

A little goes a long way

It’s tempting to go overboard with Berkley Gulp Crawdad Sprayâ€”especially when the fishing is tough. It can’t hurt, right?

What I’ve realized throughout my testing, however, is that a small amount works just as well. It comes in an 8-ounce spray bottle and this small bottle will last several months if you apply it in moderation. One or two sprays will do the trick; there’s no need to go crazy with it.

I’ve spent a lot of time tinkering with the “right” amount over the past year and from what I can tell, anything over two or three sprays is overkill. There has been no noticeable difference in my success rate whether I use two sprays or six sprays.

At $8.99 per 8-ounce bottle, I consider this to be a really good value for anglers. For roughly the cost of two packs of soft plastics, you can buy this bottle that will last for several months.

I say this a lot, but it’s important that I get it out there: I can’t conclusively state that this, or any other attractant spray, will make fish swim out of their way to eat your bait. But I have definitely noticed an improvement in my hookup ratio while using Berkley Gulp Crawdad Spray.

In my experience, I believe this spray helps themâ€”in human termsâ€”to look past any unnatural traits of your bait and keep crunching because it tastes natural. If I give you a weird-looking hotdog that tastes like a hotdog, you’ll probably take a few more bites. If that hotdog, however, tastes like a rubber tire, you’ll spit it out and throw it in the trash. That’s the best way I can describe it.

I’ve had many bad fishing days get better after applying this spray, especially when they’re short striking my baits. It’s a definite improvement. They’ll hold onto my bait for several seconds, which gives me a bit more time to execute a proper hookset. The large majority of fish I catch while using Berkley Gulp Crawdad Spray have it choked, which tells me it’s working.

Instead of spraying this formula onto one bait at a time, I’ve started spraying it inside of the bags. It saves a lot of time on the water but more importantly, it seems to soften my baits and make them a bit more fluid-looking in the water.

When I get a new bag of plastics, I’ll simply spray 3 or 4 sprays into the bag and seal it shut. In just a few hours, the baits are noticeably softer and whether it’s true or not, I feel like they’re able to absorb more of the scent. I’ll use another human analogy: You can’t marinate a chicken breast for 10 minutes and expect it to taste much different. But if you let it sit in a sealed bag for 12 hours, it’s a totally different ball game.

I’d like to think that adding scent to your soft plastics is the same way.

No leaks so far 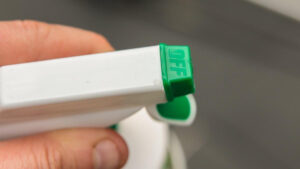 Although I’d prefer to see this in an aerosol form to help combat any unwanted leaks, I have not had any issues with Berkley Gulp Crawdad Spray thus far. There’s no oily residue on the outside of the bottle or more importantly, in my boat.

Just to be safe, I do store this bottle in a one-gallon sandwich bag. I’ve had a few scares with other products in the past and this is just cheap insurance.

I think this is a valuable tool to have in your boat. Don’t expect to cast into the middle of the lake and have a bunch of big bass swarm to your bait, though. If you’re around ’em, they’ll bite and hang on long enough to give you a great chance at catching them.