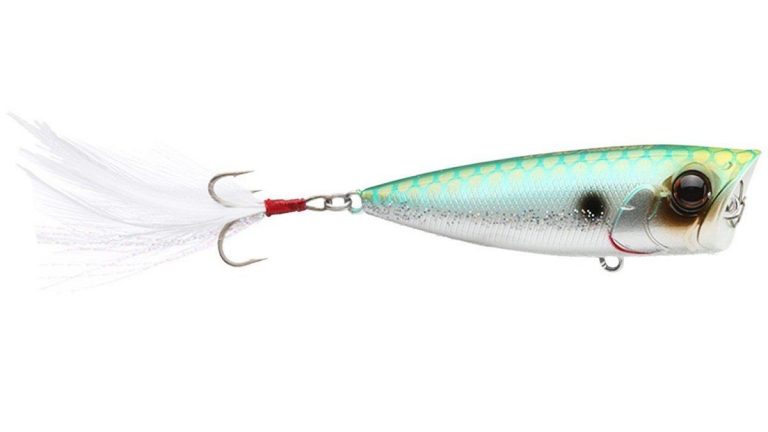 Topwater poppers arenâ€™t the most dynamic lure in the world. In an industry filled with crazy shapes and new concepts, the effectiveness of these classic bass fishing lures often falls by the wayside. But make no mistake about it; theyâ€™re still incredibly productive on bass of all sizes.

Iâ€™ve been testing the Evergreen Oneâ€™s Bug Popper since early spring and have caught dozens of quality bass with it. At first glance, it may look like a stereotypical popper, but after my extensive experience with it, Iâ€™ve found it to be an extremely dynamic lure.

A popper that walks

A lot of lure manufacturers claim that their poppers have the capability to walk from side to side throughout the retrieve. This is often true, but that doesnâ€™t mean itâ€™s easy. While most poppers will walk, they require a very specific rod and the utmost concentration. Thatâ€™s not the case with the Evergreen Oneâ€™s Bug Popper. 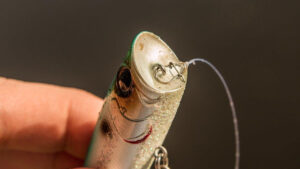 Equipped with a durable snap ring attached to the eye, the Oneâ€™s Bug walks quite easily with a generic medium-action rod. Iâ€™ve put it in the hands of several novice anglers as well and theyâ€™ve had no issues walking it across the surface like a seasoned pro.

When you closely inspect the shape of this lure, youâ€™ll notice the bottom isnâ€™t flat like most poppers. Instead, it has a very slight upward bend towards the tail; itâ€™s somewhat of a keel shape. This small design feature allows the Oneâ€™s Bug to glide a bit easier between rod twitches, thus facilitating an easy and enticing walk-the-dog action.

If youâ€™re searching for a pattern and covering water quickly, youâ€™ll find this to be a convenient and helpful feature.

Iâ€™m of the opinion that many anglers totally overlook the importance of the internal sound components of topwater poppers. We pay so much attention to the spitting or chugging that we lose sight of a very important design aspect.

The Oneâ€™s Bug has four different types of internal rattles: Tungsten, glass, steel and brass. It sounds like an overkillâ€”and maybe it isâ€”but the result is a very unique sound thatâ€™s different from any popper Iâ€™ve used. 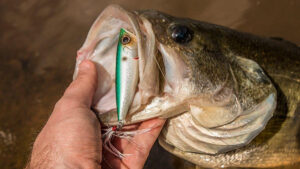 In regards to its external soundâ€”the noise or disturbance created by its cupped mouthâ€”the Oneâ€™s Bug will both spit and chug throughout the retrieve. The mouth is a bit more concave than most poppers and it makes a very distinctive â€œspitting chugâ€ sound on a routine retrieve.

Casts well for a small lure

Perhaps the most common complaint about topwater poppers is their inability to cast long distances. With the exception of some oversized poppers on the market, these lures are usually quite small and lightweight. Add a little bit of wind into the equation and youâ€™ll be picking out backlashes more often than youâ€™d like. 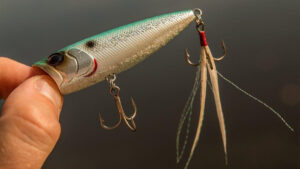 Measuring 2 3/4 inches and weighing 3/8-ounce, the Oneâ€™s Bug is a bit heavier than many other poppers. But it goes much deeper than that, in my opinion.

I have not cut open or dissected a Oneâ€™s Bug; I only own one and Iâ€™m not going to ruin in. But throughout my testing, Iâ€™m fairly certain that the larger â€œknockingâ€ rattle is located in a chamber on the tail-end of the lure. In regards to weight distribution, I believe this makes a noticeable difference when making both short and long casts.

With the majority of the weight found in the back of the lure, the Oneâ€™s Bug loads your rod excellently on the back cast and facilitates both long and accurate short-distant casts. It doesnâ€™t feel like youâ€™re casting a potato chip, so youâ€™re able to cover water or make pinpoint casts underneath docks and other overhanging cover.

Holds up well to abuse

The initial finish and quality of the Evergeen Oneâ€™s Bug is impressive, as it should be for $15.99. Iâ€™ve been using the Emerald Shiner Color and both the metal flake and base colors have held up excellently and resisted any dramatic hook rash. Out of the package, the lightwire hooks are incredibly sharp and allow for solid hooksets with small diameter lines and light-action rods.

After a lot of fish catches, Iâ€™m quite pleased with how well this lure has endured the abuse. The hooks remain sticky, the snap ring has not warped or bent in any way and the structural integrity of the lure is like new. 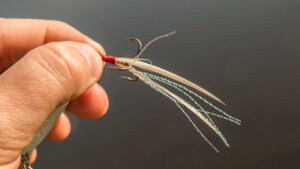 Also worth mentioning is the rear feathered treble hook. I canâ€™t tell you how many feathered trebles Iâ€™ve quickly ruined on topwater poppers. Even on the higher-end models, many of them will completely fall apart after two or three fish catches. The feathered treble on the Oneâ€™s Bug, however, is still going strong. The wrapping is fully intact and even the reflective mylar strands have remained in place.

This is a really strong topwater popper; one of my favorites, probably. The price, however, is the one caveat. $15.99 is pretty high for such a small lure, but its durability and ability to catch pressured bass may help you justify the price point. If youâ€™re a topwater aficionado, this is certainly a lure that needs to be on your radar this year.

The Evergreen Oneâ€™s Bug Popper is available at TackleWarehouse.com.