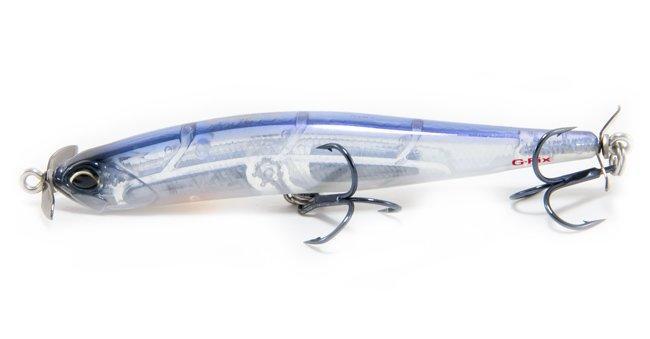 Spybaiting snuck onto the bass fishing scene in 2013 and has been quite the buzz ever since. The first spy baits to really hit the mainstream bass fishing tackle market were the Spinbait 80 spy baits from the DUO Realis line. I had one of the first ones in America last summer and was able to take it to Table Rock Lake and had a ball catching big suspended spots, smallmouths and largemouths from the clear water highland impoundment. So I’ve spent more than a year with the baits and wanted to give you my two cents on the DUO Realis Spinbait lineup.

Several characteristics of the baits make them major players for suspending and feeding fish in clearer waters. Here’s a quick rundown of my thoughts on its characteristics and performance over the last year: 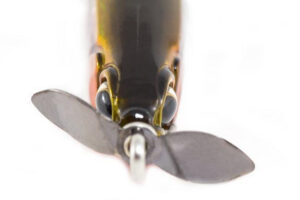 When you pick the bait up, it looks tiny in your hand with tiny little hooks. But with light line, the hooks, the profile and the action have a very natural appearance and drawing power for the bass chasing it. One thing about finesse fishing is the profile of the lure must be diminutive and natural to the fish because they spend so much time staring at the bait.

This bait and the option for more matte finishes or translucent finishes gives the bait a bit different looking profile. It can look like a small couple of inches bait fish or a bigger bait fish with a more solid finish. That’s something to keep in mind as you fish them. 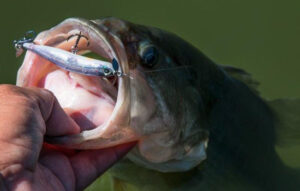 A bunch of bass sucked the lure up on the initial fall of the bait. I never made one turn of the reel handle and the bass was already on the line. The bait shimmies seductively as it falls (see this video). Then as you engage the reel and begin your retrieve, it continues that shimmy all the way back to the boat. Both spinners turn and hum, and the bait rocks on a subtle slow retrieve.

The subtle combination of actions fools even pressured bass I’ve found. When they wouldn’t react to topwaters, jerkbaits, drop shots and other finesse presentations, they bit the Spinbait 80.

One thing I was afraid of when I first got the Spinbaits from DUO was they wouldn’t be heavy enough. But even the Spinbait 80 is 3/8 ounce and casts plenty well on light line, spinning combos and baitcasting combos alike. The new Spinbait 90 weighs 1/2 ounce and is a bit bigger bait so you can fish it deeper and cast it further and work it faster in shallow water. The Spinbait 90 is also designed to be fished on lines as large as 12-pound diameter with baitcasting tackle. So that will appeal to a much wider audience of anglers.

The bait sinks well while maintaining it’s action. And if you keep the line diameter down, you can keep the bait at depth through the whole retrieve which is a important with the spy bait technique. You want the bait to stay in a deep strike zone without coming to the surface. 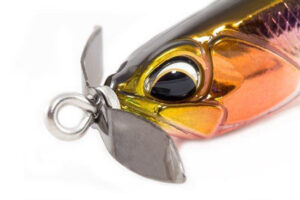 When you’re fishing ultra clear water, how the bait looks, how it moves and the details of the bait’s finish matter. The fish will study the bait longer in clearer water. The slower it moves, the better the fish can study the lure before biting. So it’s important in my opinion that these baits have amazing detail in their shape and color patterns. They look good, natural and alive in the water.

This is not a search lure. The propellers don’t put off enough turbulence to draw bass from that far. There is some flash, some shimmy, some low vibration from the spinners, but the bass need to be able to see it and the angler has to know there are bass in the area already.

On Table Rock, I had found several groups of fish. They were shying away from the topwater baits, occasionally falling for a jerkbait or a drop shot cast and swam through the school. But they were pressured and skittish and visibility was greater than 10 feet underwater. 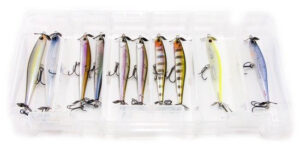 Since that summer, I’ve been experimenting on where to fish them. Another application I found for them was around shallow cover when bass were spawning or feeding on baitfish on hard targets. It works well around docks. I’ve caught bass off stumps. I’ve caught fish that were schooling and busting minnows on the surface.

My best tip is to take the front hook and lay it back against the body. There will be one point sticking straight down. Clip that point off the front hook. This will make the bait probably 50% less likely to snag on cover. Because it runs with a nose up orientation, that bottom front hook is just looking for something to snag on. Clip it off and you’ll have a better chance to get your bait near cover without it getting hung.

I’ve got several now in the original Spinbait 80, the Spinbait 80 G-Fix and the new Spinbait 90. They are great clear water baits. Keep your line size down to a 6- or 8-pound diameter or less for the Spinbait 80. You can upsize your line to 10-12 pound line and baitcasting tackle as you move up to the Spinbait 90, and you’ll have a lot of success.

You can find the baits here on tacklewarehouse.com and at retailers that carry DUO lures. 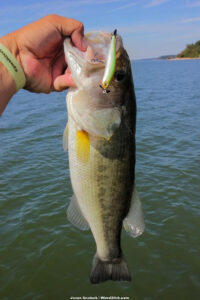