To be quite honest, I get a little giddy whenever I find a single fishing rod that can be used for a wide array of bass fishing techniques. It wasn’t long ago when you’d see me fishing tournaments with one—maybe two if I was lucky—rods on the front deck of my boat, so I have a special appreciation for affordable and versatile fishing gear.

I’ve been using the Denali Jadewood J2 Series Casting Rod for several months and I’ve really enjoyed my time with it. With a price point starting at $99, it has a bunch of high-end features that allow it to perform like many rods that are twice as expensive.

It’s a pleasure to use

I have a few rods that will really kick my rear-end during a long day on the water. They’re not balanced very well and have uncomfortable grips, but they also have a lot of power, so in certain power fishing scenarios I’ll deal with the hassle. This often leads to unnecessary hand cramps, sore forearms and shoulder pains.

Since using the Denali Jadewood J2, however, I’ve actually become a bit spoiled. I’ve been using the 6-foot, 8-inch medium-heavy model and although it’s extremely lightweight, it has an impressive about of power and versatility.

This rod was primarily designed for jigs and worms, but I’ve found it to be very effective for several bass fishing techniques.

I’ll run through this rod’s most practical characteristics for each technique. 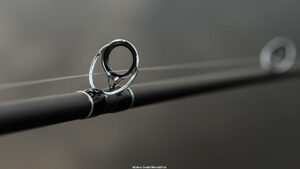 I was recently talking to Shaw Grigsby about some upcoming feature ideas and he said something that kind of stuck with me.

“The most important thing you can do is learn and memorize what your lure or bait feels like throughout the retrieve. Become intimate with every little detail.”

I’ve been thinking about that a lot throughout my past several fishing trips and he’s totally right. Some of the biggest bass I’ve caught have hit my lure like a bluegill, so we have to be totally in-tune to what’s going on down there. The Jadewood J2 has made this very simple for me. 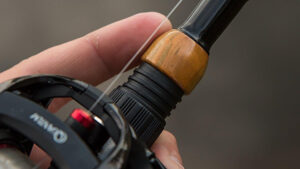 As I’ve discussed, the rod blank and tip is very sensitive— we’ve covered all of that. But the hardwood foregrip adds a great amount of sensitivity throughout the retrieve whenever you’re using bottom-contact baits. It’s kind of the same general concept as tungsten weights— they’re denser and harder, which translates into sensitivity. Likewise, this hard and dense foregrip transfers the feel of your bait directly to your hands which I have really enjoyed. I haven’t really noticed a big difference with moving baits, but if you’re a “dragger”, I think you’ll be able to appreciate this unique feature.

A great balance of strength

All too often we consider a rod’s “strength” its ability to set the hook hard and effectively. That’s certainly important, but when a rod manufacturer gets carried away with the strength aspect, we’re often left with a one-dimensional rod.

The Jadewood J2 has a great balance of strength, if you will. Even when I set the hook really hard when pitching and flipping, I haven’t noticed a giant, gaping hole in the bass’ mouth. The hook penetrates cleanly and efficiently, which aids in increasing hookup ratio. There is certainly such a thing as “overpowering” bass and although this rod is very strong, it has enough tip to facilitate high-percentage hooksets and counter any strong, boat-side runs a bass may make.

The hook keeper stays out of the way

It might sound like I’m splitting hairs here—I probably am—but I don’t like hook keepers located on the topside of rod blanks. Whether I’m in windy conditions or simply feeding my jig some slack to avoid the “pendulum effect”, I have broken a lot of rod components when that line gets caught up in the hook keeper.

That’s why I really like the location of Jadewood J2’s hook keeper. It’s on the bottom of the blank just about the foregrip and it stays totally out of my way. I don’t have to keep a constant eye on my blank and I’m able to cast, flip and pitch all day without any worries. Again, it might sound a bit peculiar, but I have thoroughly enjoyed this particular feature.

If you’re looking for a solid, all-purpose rod for bass fishing, I think the Jadewood J2 Series is certainly worth consideration. They’re priced starting at $99 and it performs like a much more expensive rod in my opinion.