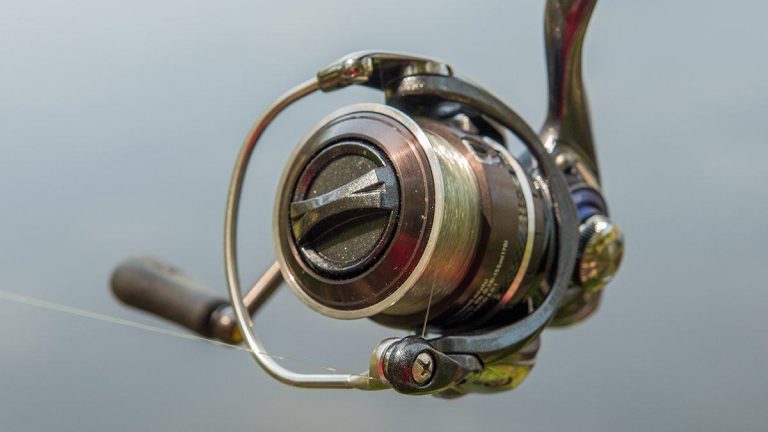 Buying a spinning reel is perhaps one of the most important purchases a bass angler can make. Anytime you’re fishing with light line, it’s essential to use a spinning reel that will dispense drag smoothly and hold up to the rigors of big fish. If not, you run a serious risk of breaking off the bass of a lifetime.

I’ve been testing the Daiwa Procyon EX Spinning Reel for a few months and have put it through just about everything I can think of. Whether I’ve fished it on large reservoirs or small ponds, it has continued to impress me in several ways. If you’re in the market for a new spinning reel, I suggest giving it some serious consideration.

Before anything else, anglers will immediately notice the buttery smoothness of the Daiwa Procyon EX Spinning Reel. Not only does the Air Rotor system weigh up to 15 percent less than many other rotor designs, but it also allows the reel to function as well—if not better—than some reels twice its price. 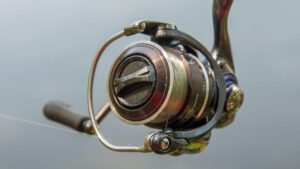 I don’t say that lightly. There are some really impressive spinning reels on the market, but they often retail at the $300 price point. I have no idea how Daiwa did it, but this particular reel starts at just $149.99 which, in my opinion, is an absolute steal given its premium performance. I’ve simply been blown away by how smooth this reel is. If it were $300, I’d buy one without any reservations and you’ll rarely hear me say something like that.

The adjustability of the waterproof drag system is incredibly sensitive, which is a necessary feature when you’re targeting big bass with light line. You’re able to adjust the drag to fit any situation and even when you’re in mid-fight with a bass, it dishes out drag consistently and smoothly. You won’t notice any surging whatsoever—that’s hard to find in a more expensive spinning reel, and even more so at this price point. 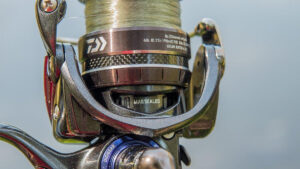 The Procyon EX also has a lightweight aluminum frame that doesn’t flex under pressure, even when a big bass surges at the boat or the bank. You can find rigid frames in spinning reels, but they’re typically heavy and a bit “clunky”. You’ll be very impressed by this reel’s blend of strength and weightlessness.

I made a point to test this reel with straight fluorocarbon and no braided main line. While many anglers prefer to use braided line for finesse applications, I try to avoid it because I don’t want an extra knot to worry about when I’m landing fish. But there’s a big problem with my preferred setup: Many spinning reels I’ve tested don’t handle fluorocarbon well and there is nothing—and I repeat—nothing more irritating than senseless bird nests when you’re using spinning gear. 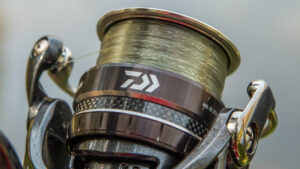 The Daiwa Procyon EX handles fluorocarbon excellently and I haven’t experienced a single line management issue throughout the entirety of my testing. I’ve been using 8-pound fluorocarbon on the 2500SH model and it leaves the spool smoothly and packs on tightly during the retrieve. Even when I’m skipping lightweight lures and introducing excess slack into the line, I haven’t had to worry about any catastrophic line tangles. As I’ve told all of my fishing buddies, this reel makes 8-pound fluorocarbon feel like 6-pound monofilament. 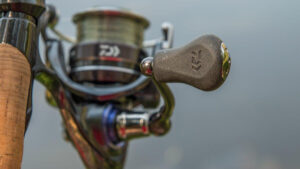 There have been a bunch of big bass in the shallows of my private pond and I’ve probably caught close to 40 bass weighing over 4 pounds and up to 8 pounds on the Procyon EX. I’ve purposely “played them” a lot after hooking them in order to test the drag system and I honestly can’t say enough good things about its performance. I have yet to lose a bass, even when they’re skin-hooked in the thin part of their mouths.

This reel has blown me away and I will certainly own more of them. I know $149.99 is a lot of money, but when you compare it to some of the more expensive models out there, this is an absolute steal that deserves your attention. As I mentioned earlier, if you’re in the market for a new spinning reel, don’t ignore this one.

The Daiwa Procyon EX Spinning Reel is available at TackleWarehouse.com.