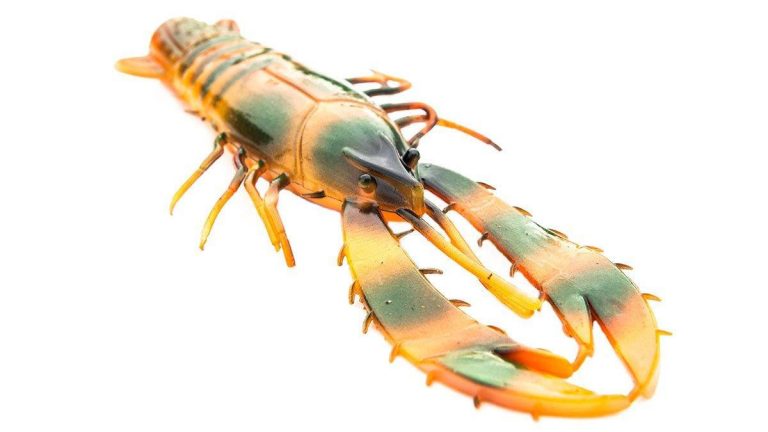 A lot of folks are a bit underwhelmed in regards to new soft plastic baits for bass fishing. I can’t totally blame them, either. Yes, you’ll run across some each year that seem to stand out from the crowd—many of which we have reviewed here on Wired2Fish—but for the most part, a lot of them look the same. Let’s be honest with each other—how many times can we really reinvent the wheel?

If you find yourself a part of this disenchanted group, you might want to take a long, hard look at the Big Bite Baits Real Deal HD Craw. I’ve been dying to try it since its release and for the last few weeks, I’ve spend a considerable amount of time fishing it in both large fisheries and smaller ponds.

I’ve been quite impressed by several features of this bait and it’s certainly one of the most realistic craw-imitation baits in my collection. Here’s what you need to know about it.

You might eat this sucker at a crawfish boil 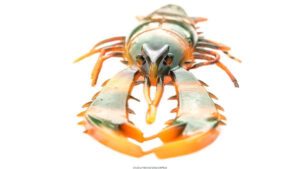 We’ve all seen the “basic” crawfish-shaped soft plastics out there. Throw a couple pincers on there, some wiggly legs and some antennae and you have a crawfish, right? That’s true to an extent. I’ve used a lot these more traditionally designed lures over the years but come on—look at this bait. If you were to set one on a table at a crawfish boil, there’s a good chance I’d have a belly full of plastic. I wish I were kidding.

There are several small features that, in my opinion, contribute to its realistic appearance. The body and head shape are perhaps the two most striking characteristics of the Big Bite Baits Real Deal HD Craw. The exoskeleton shows incredible detail that proves to be a near-perfect match of a real crawfish. From the plate etchings to its compound eyes and rostrum, it’s a downright sexy bait.

I also took notice of the appropriately sized pincers on this bait. Some crawfish-shaped baits go a bit overboard with the pincers, but I doubt the crawfish are down there waving giant, lobster-like pincers around yelling, “Look at me! Look at me!”

And if you look even closer, you’ll see excellent detail in the walking legs of the Real Deal HD Craw as well. They’re not just small strips of plastic—they’re even forked at the ends, much like the real thing.

Lastly, it’s important to mention that this bait comes in custom airbrushed colors. If you were to tell me that before I used it, I would have probably rolled my eyes and walked away, to be honest. As it turns out, however, it seems as if the airbrushed paint gives the bait a very natural, slick-looking shine. If you’ve ever scrounged the creeks catching crawfish as a youngster, you’ll know that their exoskeleton is, in fact, shiny.

Okay, so it’s a good-looking bait—you get it by now. But just like a professional career, good looks will only get you by for so long. At some point, you have to perform. Fortunately, the Real Deal HD Craw has the action and fishability to match its attractive exterior.

You have two important options with this bait. You can either keep its pincers together as it comes in the package or separate them. Does it really make that big of a difference? It certainly does, as it performs very differently depending upon your decision.

Keep ‘em together in tight quartersWhen pitching and flipping gnarly laydowns and thick vegetation, I’ve had most of my success by keeping the pincers together. This gives the bait a more streamlined profile to allow for easier penetration while also facilitating a more subtle, gliding action as it falls to the bottom. When its at rest, the pincers elevate nicely even when joined, but you won’t notice much of a flapping action. For this reason, I’ve also enjoyed some decent fish catches on post-frontal fishing days due to the subtle, less overpowering action.

Pull ‘em apart around isolated coverWhen you separate the pincers, the Real Deal HD Craw seems to come alive. The pincers flap erratically both on the fall and throughout your retrieve and when the bait is at rest, they sway and undulate with very slight movements of your rod tip. I’ve played around with it in very shallow, clear water and it looks excellent and ultra-realistic.

Durability hasn’t been a major concern 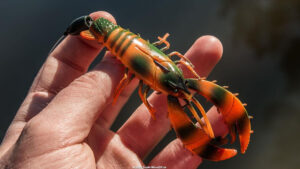 I was quite curious to see how this bait would hold up throughout repeated skips, flips, casts and most importantly—fish catches. I don’t know if I’ve ever used an airbrushed soft plastic before so I truly didn’t know what to expect in terms of durability. 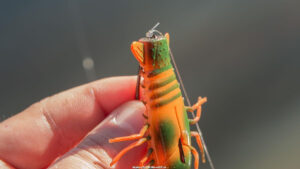 The Real Deal HD Craw stays rigged quite nicely with very little, if any, sliding or slipping down the shank of the hook. You’ll notice that the top, tail-section of the bait is totally flat, which allows it to sit snugly against the weight of your Texas rig. Its body is also rather flat, making intricate skips fairly easy as it doesn’t catch too much water as it slides across the water’s surface.

The exterior—or maybe I should refer to it as “the paint”—of the bait is fairly durable. You can catch numerous bass on a single bait, but you will start to notice teeth marks and scratches after a few catches. It’s not enough to compromise the overall color scheme, but I think it’s worth mentioning. Even when it’s scratched-up, however, it’s a darn good-looking bait. 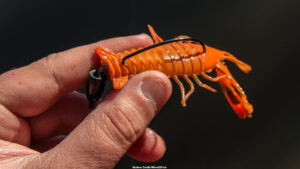 If you like to pitch and flip, I don’t have any problem whatsoever recommending the Real Deal HD Craw. At $4.99 per 4-pack, they’re not cheap but in this specific situation, I believe you’re getting exactly what you pay for. If the price is a bit steep for you, however, you can also check out the regular Real Deal Craw, as it’s priced at $3.99 per 7-pack. You’ll just have to do without the custom airbrush finishes.