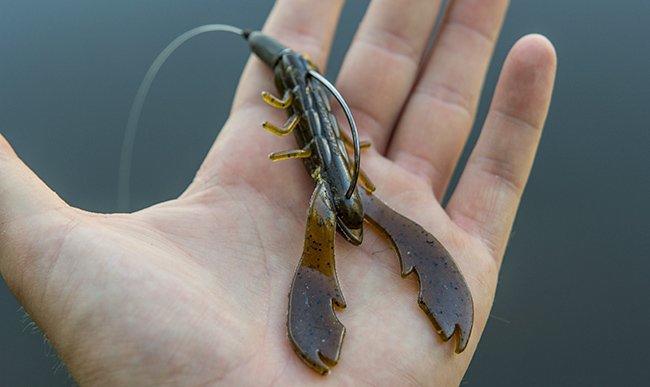 Although many anglersâ€™ focus turns to shad-imitation baits and lures throughout the fall months, itâ€™s always important to keep a soft plastic crawfish bait nearby. The bass will certainly follow ongoing shad migration into the shallows, but theyâ€™ll often use nearby shallow cover as ambush pointsâ€” and make no mistake about it, big bass wonâ€™t think twice before inhaling a well-placed craw bait.

Iâ€™ve been doing a lot of fishing lately with the Berkley Powerbait Chigger Craw. After thousands of flips and pitches both at home and abroad, Iâ€™ve been very impressed with it.

There are 3 specific things I really like about it.

When Texas-rigged, the Chigger Craw offers a large profile and subtle action.

Whenever Iâ€™m having trouble getting bites, Iâ€™ll downsize my bait selection if I really have to. Thereâ€™s one problem, thoughâ€” I love throwing big baits and I have a lot of confidence in them. The Chigger Crawâ€™s large size and delicate action, however, gives me the best of both worlds in many situations.

I tend to categorize the Chigger Craw as a â€œglidingâ€ crawfish bait. As it falls to the bottom on a light Texas rig, it will slide slowly through the water column which makes it a very powerful tool when Iâ€™m dissecting vertical cover such as dock posts. The gliding action of this bait has resulted in hundreds of bites before it even touches the bottom.

Without any flanges on its pincers, the Chigger Craw is very effective on lethargic bass.

When the bait hits the bottom, its pincers float at a 45-degree angle, imitating a crawfishâ€™s natural defensive posture. The pincers donâ€™t really flap or paddle, which can be a good thing in tough conditions. Instead, they wave back-and-forth with very slight movements of your rod tip. While some crawfish baits are made to elicit aggressive reaction strikes, the Chigger Craw seems to appeal to very lethargic bass that wonâ€™t respond to more intrusive offerings.

Durability has never been an issue

This bass wouldn’t bite a reaction bait, so I pitched the Chigger Craw to the same laydown and caught her on the first cast.

I probably average around four fish per bait whenever Iâ€™m using the Berkley Powerbait Chigger Craw. Although the pincers are big, Iâ€™ve never had much of an issue with their durability. Youâ€™ll find a lot of crawfish baits that will lose their pincers and other appendages after just one bite, but that hasnâ€™t been the case here.

The Chigger Crawâ€™s pincers have a fair amount of â€œstretchâ€ to them. In other words, they donâ€™t rip away from the body easily whenever youâ€™re dealing with short-striking bass or curious bluegill. I pitch and flip a lot, so I really appreciate this quality. It has saved me a bunch of time and money because Iâ€™m able to catch several nice bass without constantly re-rigging. 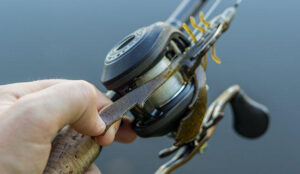 The pincers stretch to almost twice their original length, resulting in outstanding durability.

Iâ€™ve also found this bait to be very effective as a jig trailer because its oversized pincers slow the jigâ€™s fall considerably. When used as a trailer, it stays in place very well whenever Iâ€™m skipping docks which, again, saves a lot of time. I canâ€™t stand having to constantly push my trailer back up the hookshank when Iâ€™m on a solid dock bite and the Chigger Craw is a very low-maintenance trailer that can produce some really big bites.

Youâ€™ll land most of your bites 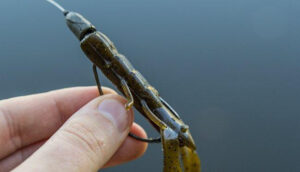 This is a very thick bait that stays on the hook well and lasts for several fish catches.

When you open a bag of Chigger Craws, youâ€™ll probably be knocked back by the smell. They smell like rotten fish and even though theyâ€™ll make your fingers stink, the bass respond very Â to the scent.

Itâ€™s impossible for me to proclaim that the scent is the reason for such a high hookup ratio with this bait, but I will say thisâ€” Iâ€™ve used several very similar-looking baits without the scent and have not experienced the same aggressive strikes that I have with the Chigger Craw.

Iâ€™ve had a problem lately with the finicky fish on my home fisheries. I can get plenty of bites, but itâ€™s been extremely difficult getting them in the boat. One of the few ways Iâ€™ve been able to catch â€˜em, however, has been with the Chigger Craw. Regardless of whether they â€œthumpâ€ it or just lazily swim off with it, they seem to hold onto the bait for a very long time which has given me plenty of time to connect with a solid hookset.

If youâ€™re a shallow water angler, I definitely recommend checking out the Berkley Powerbait Chigger Craw. Itâ€™s big size and subtle action has done a lot of damage for me and a few packs will last for plenty of exciting fish catches.

The Berkley Powerbait Chigger Craw is available at these retailers: