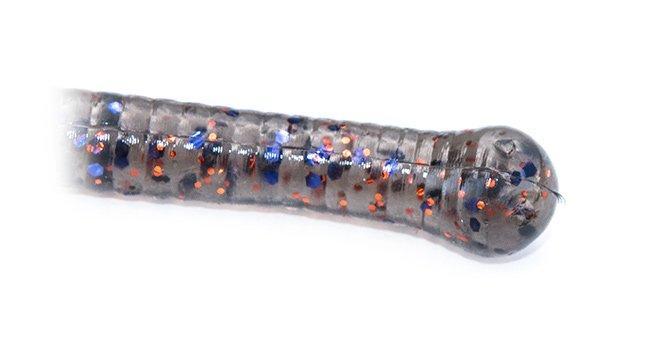 Whether it’s caused by fishing pressure, weather fronts or awkward transition periods between seasonal patterns, bass can become pretty finicky creatures. The bass in my area have been tricky to catch lately, forcing me to downsize my presentation in order to keep catching fish.

I’ve been relying heavily on the subtle profile of the Berkley Havoc Money Maker for the past few weeks and it has produced a lot of quality bass. I’ve been extremely impressed by it for the following reasons.

The Berkley Havoc Money Maker is designed with several characteristics that make it an excellent choice for wacky rigged applications. It’s molded with two large, rounded ends that facilitate a very lifelike, parabolic action as it slowly falls to the bottom. You’ll find a lot of wacky rigged worms that require rod tip movement in order to achieve similar action, but that’s not necessary with this bait. You simply let it fall on slack line and the Money Maker quivers, undulates and wiggles without any added effort from the angler.

The ribbed sections on both ends of the bait’s center point further enable an enticing, slow falling action. These sections are a bit skinnier than the rest of the worm, which allows for more flexibility which, of course, results in more movement.

I’ve found the Money Maker very easy to fish, regardless of an angler’s skill level. I simply let it fall to the bottom pop the slack in my line a few times and wait for my line to start swimming to the side. It only measures 4 1/2 inches in length, which has been super effective on really tough fishing days. I love fishing big, fast moving baits and lures as much as anyone, but sometimes it’s just not feasible.

Before I started catching a lot of fish on this bait, I had been catching them very well flipping a traditional Texas-rigged creature bait to isolated cover. After a few cool nights, the bite disintegrated and things got really tricky. As a result, I started skipping a wacky rigged Money Maker to the same areas and the results were outstanding—the bass were still there and they couldn’t ignore this bait’s ridiculous action. 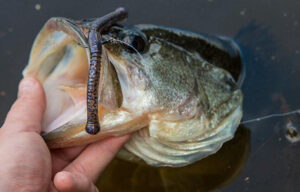 There’s no doubt that wacky rigs catch big bass in difficult fishing conditions but the durability, or lack thereof, of this rig is often scrutinized by anglers. That’s why you see a lot of folks adding rubber O-rings to their baits—anything to make ‘em last for a few more fish catches.

Perhaps the most impressive characteristic of the Berkley Havoc Money Maker is its durability. The plastic is very resilient and the bait will actually stretch twice its length without any ripping or tearing whatsoever. It’s not uncommon to blow through a few packs of plastics whenever you’re wacky rigging, but you’re able to fish an entire day with just a single pack of Money Makers.

The hook also stays in place very well, even when I’m skipping it underneath docks and overhanging bushes. The middle section of the worm is enlarged, giving your hook more “meat” to grab and I’ve noticed very minimal tearing or ripping. I’ve been able to catch up to six bass on a single Money Maker—that’s very impressive in my opinion.

A lot of the traditional soft plastics anglers use for wacky rigging require a little extra time to rig because it can be difficult to find their true center points. It’s not that big of a deal, but I’ve had a few instances lately where the Money Maker’s ease-of-rigging has really paid off.

I was skipping a Money Maker that had previously caught multiple fish underneath nearby overhangs. The action had slowed throughout the afternoon and I kept telling myself, “One more good fish and I’ll go home.”

Just as I started to daydream and lose concentration, a bass crushed it. I was late on my hookset and of course, I totally whiffed. I quickly grabbed another Money Maker from my pocket, rigged it in just a few seconds, skipped it back in there and caught the fish. There’s no way to tell, but I attribute that fish catch to my ability to quickly present the same bait in the exact same spot before the bass was able to “process” what really happened.

Bass fishing can be a really expensive sport and I have a great appreciation for quality products that help anglers avoid any financial burden. The Berkley Havoc Money Maker is priced at $2.99 per 15-pack which is an absolutely smokin’ deal. It performs like many more expensive baits but the price point allows you to catch a lot of more fish for your dollar. Do the math—you’re paying less than 20 cents per bait. That’s pretty darn tough to beat.

If you’re looking for an affordable soft plastic bait that will work excellently on both weightless wacky rigs and drop shot wacky rigs, I absolutely recommend the Berkley Havoc Money Maker. I’ve really enjoyed it and I think you will, too.

The Berkley Havoc Money Maker is available at TackleWarehouse.com.