In bass fishing a lot of us probably suffer from sensory overload. To say one has sensory overload is almost to say one is numb to new external stimuli. In layman’s terms, that means been there done that. It’s funny, but the more savvy we become as bass fishing anglers, the more we have to be “wowed” by new products on the market. You can’t just go out and do “your version” of what someone else already did. To really wow those of us who spend every waking moment thinking about, dreaming about or participating in bass fishing, the new product has to be something new.

We test and review a lot of products, hundreds a year in fact. A good portion of them never make the website because a lot are just the new flavor of already known dessert. But one product we’ve been itching to test is a unique swimbait out of Georgia made by Mike Bucca. His creation is called the Bull Shad. It’s basically a swimbait created to mimic big gizzard shads that savvy anglers know very large bass eat.

We got the 6-inch slow-sinking version of the Bull Shad custom painted by Dwain Batey. These custom baits can be found at BullShad.com and also Baitwerks.com. The pattern we got was a bleeding shad pattern. The original Bull Shad has a matted almost rough draft version of a paint job. That’s something that actually caught our eye because we’ve hardly ever seen a perfect looking gizzard shad. Most of the time those fish are swimming for their life and get nicked up in the process.

But Batey’s custom version of the bull shad has a nice smooth glossy finish, translucent purple sheen that shows on the back and sides of the bait and of course a kill spot and blood from the gills. Apparently the bass find a big shad in this condition a filet mignon of easy meals.

Bucca uses top of the line components with Owner hyperwire split rings and Owner 2x trebles on his Bull Shads. So you won’t have to switch any components before you get started chunking the big baits. The line tie is solid, the hinges are solid and we especially like the tail material. So many swimbaits with rubber tails get torn off after just a few fish. So we like this tail material that appears to be indestructible. In fact, Bucca advised that if the tail got a little bent or warped, just microwave a cup of water and put the tail in it for 2 seconds afterwards and it will straighten right back out.

For the testing the last couple of months we’ve been throwing the bait on 20-pound Seaguar Tatsu fluorocarbon on a heavy power 7-foot, 3-inch Quantum Smoke Rod and a 7-foot, 6-inch Veritas heavy power rod with either the Smoke reel or a low gear ratio 5.4:1 Lew’s Tournament Pro reel. For a bait this large, you need a good strong rod. It’s more like lobbying pumpkins than it is casting lures with big swimbaits. Just the concussion from the cast can wear out a poorly made bait, so we wanted to make a lot of casts with the lure to make sure it held up to a lot of abuse.

The first thing we noticed was how far the bait could flex side to side. The tail could almost flex in a c-shape back towards the head. That gives a swimbait a lot of possibilities when it has room to maneuver in its own form. We started testing it with straight steady retrieves. The steady retrieve gives the bait a very natural presentation. You can burn the bait with a high rod tip and it wakes exceptionally will. When you kill the bait and throw slack back towards it, the bait will turn around and sort of look behind it. It acts like a giant version of a soft jerkbait. We tested popping it and teasing with the bait with stop and go retrieves. 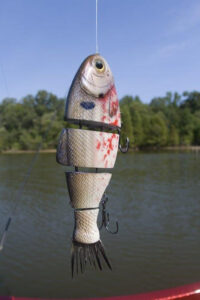 But day in and day out a slow steady retrieve seems to do the trick on most fish. The bait works pretty well around schooling fish, although the smaller fish sometimes have a harder time getting hooked up just by the nature of the bait. Where it really has shined for us is fishing points and catching isolated feeders. Honestly we’re just entering the fall where a big hard swimbait like this one can be magic. But with what we’ve seen through the summer, we’re pretty excited about the fall.

The bait can take a lot of abuse from what we’ve seen. We’ve cringed on a few casts where the bait landed in inches of water and hit rock bottom. Or where a little long cast caught the side of a dock post. The s-action of the bait gives it a larger profile in the water and it’s slow pause and fall on the kill really makes the bait come alive.

It’s an incredibly fun lure to fish. No it’s not going to magically make an angler start catching 10-pounders. But on our fishery, we’ve seen some huge bass chased down shad 10- to 12-inches long. This would be a snack compared to some of those real gizzards we’ve seen. 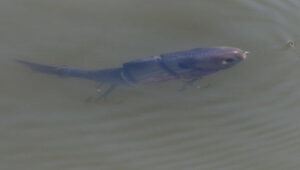 The bait retails for $49.99 for the 5-inch version and goes up for each larger version. Bucca promises an 8 and 9 inch version in the fall for the truly big bass hunters out there. But for us the 6-inch is a big profile that can appear smaller when paused and slow sinking. We’ve caught schoolers on it and fish up to 3 pounds on it. It’s actually nice having them on big hooks because they are easier to unhook. But we’re excited about tangling with a bruiser bass this fall and we’ll definitely continue this review when that happens.

These baits are hand made and hand painted and sold in limited quantities to only a few select retailers. That makes them more valuable in our mind especially if you can find a pattern to run with on your fishery, because a lot less guys have these in their tackle boxes. So far four anglers have confessed to winning BFL tournaments on the Bull Shad and probably several more have but not told anyone yet.

So if you’re looking for a way to target big bass as the move back to shallower cover, you might want to invest in a Bull Shad. We’ve found that the smaller 5-inch model might need a little tuning but the 6-inch model ran great out of the package. So take your time with them, experiment with them in your bass fishing, try them on a lot of different areas like flats, stump fields, shallow bars, points, standing timber, isolated pockets, laydowns and more.These lures have already produced a number of big bass from spots to smallmouths and will probably produce a lot more as guys learn where and how to apply them to their bass fishing style.

To read more about the Mike Bucca’s Bull Shad, including the custom painted ones from BaitWerks, visit Bullshad.com.  To order your own, visit Tacklewarehouse.com. 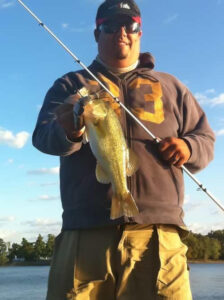