Russ Lane’s a big fan of slinging swimbaits when bass fishing for fun and for a living, but he knows attacking bass can pull back on the throttle moments before impact which leads to missed hookups with a swimbait. So, he devised a creative rigging method for his favorite swimbait, the Big Bite Baits BB Kicker for maximum appeal and grabbing power.

“I wanted a way to rig the swimbait to really come to life with a lot of action from nose to tail,” he said. “I also wanted a way to catch more of the short striking bass, because you’ll get a lot of fish that just come up and nip at your bait â€” even the big ones.” 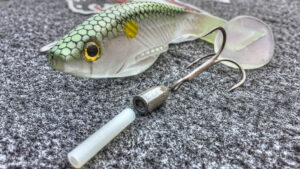 Lane starts by inserting a plastic spacer (available at most home improvement stores) into the nose of his swimbait. As he points out, this rigid spacer proves more effective than a plastic drinking straw because he can forcibly shove it into the bait’s nose without it collapsing.

Next, he’ll thread his line through this channel and add a tungsten bullet weight from 1/4 to 3/8 ounce, depending on depth. The weight’s backward orientation proves essential. 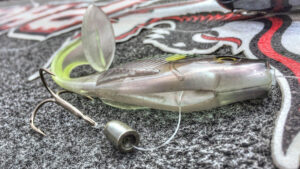 Next, he adds a No. 1 Gamakatsu round bend treble hook. Lane prefers the bronze hook because he finds it’s slightly lighter and sharper than the black nickel version.

“You can get away with a little lighter line with this hook,” Lane said. “Some people might use 22- or 25-pound fluorocarbon line with this type of swimbait, but I like 18- or 20-pound line.”

To secure his treble hook, Lane brings one of the points through the bait’s belly and Tex-poses it for a streamlined profile. The other two points ride below the bait’s belly. When properly positioned, the BB Kicker’s pectoral fins act as impromptu weed guards.

“It’s not 100-percent weedless, but those two pectoral fins lining up with those hook points really help it come around a stick or dock or whatever you’re throwing it around,” Lane said. “But rigged this way, this bait will catch anything that bites it, even when they only get half of it in their mouth.”