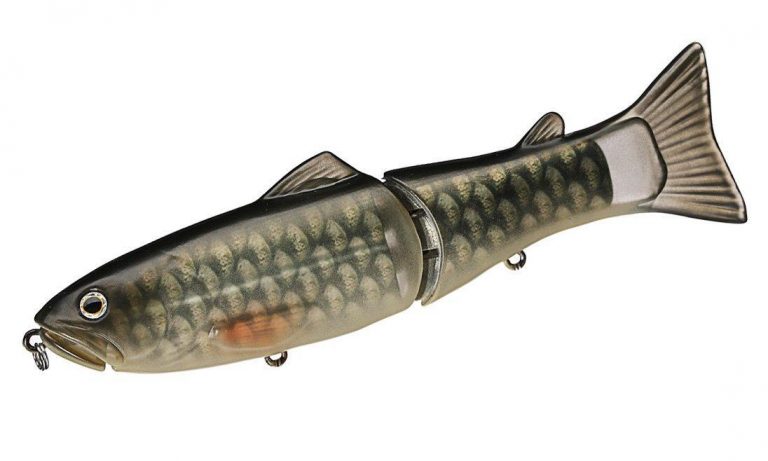 We’ve posted a few stories about fishing with glide baits for big bass. They are one of the hottest categories of big swimbaits over the course of the last few years in big bass fishing circles. The bait that arguably started it all is the DEPS Slide Swimmer 250. It’s still one of the most sought after swimbaits on the market now along with other staples of big swimbaits like the Huddleston Deluxe, Roman Made Mother and Bucca Bull Shad.

We’ve been fishing with the DEPS Slide Swimmer for more than a year now and thought we’d share our thoughts and some of the stuff we learned along the way about these baits from other much more accomplished big swimbait guys like Don Moorman, Butch Brown and Matt Newman.

WHY THE DEPS SLIDE SWIMMER IS SO POPULAR

Part of the popularity stems from the design of the baits, the new sashay in swimbait movement, the incredible catches on the bait and probably some of the mystique from lack of availability and the time required to understand how to fish it. It seems when a new big swimbait hit the market, there is a year or two of guys throwing it, figuring it out and really learning what it does well. Then there is a period where everyone knows about it and it becomes incredibly scarce for a time. Then after that the cat is essentially out of the bag and more and more anglers learn the applications and nuances of the new bait. It happened with the Huddleston Deluxe and the Bull Shad as well.

We are in that period where a lot of people know about the Slide Swimmer but not a lot of people can get their hands on them and a lot of people are still learning when and where to throw them and the fish are seeing a lot of them on certain lakes (especially if you live in California). 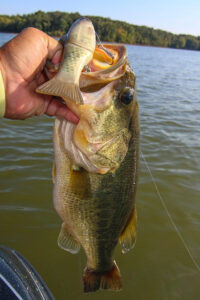 The Slide Swimmer 250 was first and it’s a massive fishing lure. It measures 10-inches long and weighs an astounding 6.5 ounces. Not of the faint of heart. It’s little brother the DEPS Slide Swimmer 175 is 7 1/2 inches but only weighs 3 ounces.

The bait features a single joint that gives the bait a wide lumbering swimming motion on a steady retrieve. But it’s name comes from its ability to dart off to one side or the other on a couple of quick turns of the reel handle and pause and sweep of the rod. It’s that blitz and glide action that triggers bites from some very large bass.

The bait is a slow sinker but it can be fished deep effectively. It’s a lesson in patience as it can take more than a minute to get to the bottom in very deep water (deeper than 30 feet). But often it is fished in water less than 10 feet deep and where you can call bass from a great distance.

It features great detailing and colors and a lifelike skin overlaid on a hard shell body. You can actually remove the skin to play with weighting the body.

WHAT I LEARNED ABOUT THE DEPS SLIDE SWIMMER

It’s a special swimbait no doubt. The Slide Swimmer is fun to fish because it seems like there is always a lot of anticipation. You can feel the wide lumbering swim and back and forth motion. Once you get a feel for how it moves, you can start experimenting with burning and stopping.

One guy who showed me a lot about what the bait could do was Don Moorman of California. He’s caught numerous bass over 8 pounds on the DEPS Slide Swimmer, even into the teens. He’s caught bass on it in cold water and hot summer water as well as in water 1-foot deep to water 30 and 40-feet deep. He posts most of his catches on YouTube as well. 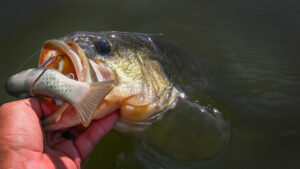 The DEPS Slide Swimmer has a feel all of its own. You make a long cast then count it down. Then when you think it’s on bottom or deep enough, you start a steady retrieve to give it that wide side to side swim. You can burn it to give it a real erratic hard side to side motion. But either way, the beauty is in the pause. Crank it 4-5 times and then pause and as you stop reeling pull the rod slowly to the side. That will start the bait on its “glide.”

Matt Newman told me to think about swimming the bait along and visualizing a bass following it. So you give it a few hard turns and then pause and let it glide. The bass reacts to that quick darting move and then the bait looks like it’s stunned or dying, and the bass move in for the kill. 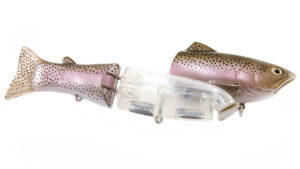 Knowing where to throw the bait takes some time. But it helped me to not think about it as a situational bait as much as a “try it on your known good spots” and see what happens. Don Moorman started me on the big swimbait kick with Huddlestons more than a decade ago. I’ve molded that and morphed it to fit the lakes I fish, since we don’t really have trout. Now I’m amped up to catch some big bass this year on DEPS Slide Swimmer 175 and 250.

I’ve had limited success thus far DEPS Slide Swimmer, but it takes time to develop a feel for how to fish it in each place. I love throwing it. There is something cool about the mindset you have to have to fish a bait like that all day.

These baits have been in high demand. Even with price tags at $109 and $179. If you find one and want one, you better buy it before it’s gone. You can preorder and get on mailing lists for notification for when they are in stock at Tackle Warehouse. I saw at least two colors in stock this week. You can find them on EBay quite often as well. One thing is for sure; they’re highly sought after and for good reason.