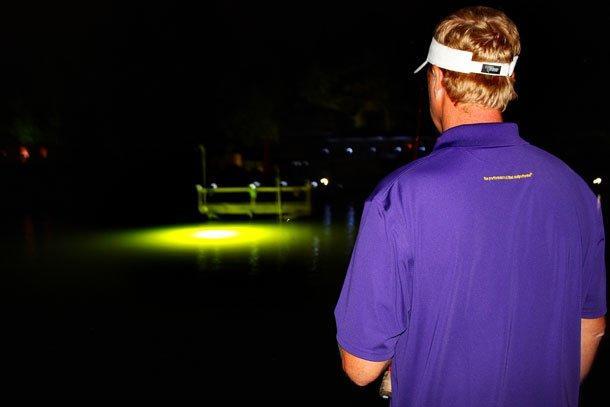 When the summer sets in, the heat in a boat can be brutal. Mix in a few hundred summer breaksters on jet skis, and all of a sudden a fun fishing trip on the lake turns into a Nightmare on Elm Creek. But bassing during the summer months doesn’t have to be miserable. One of the best ways to beat the heat and avoid the crowd is by simply sleeping in on Saturday. Get up around noon, mill around in the AC for a while and finally slip outside to hook the boat up about the time the sun starts to set. One of my favorite things about summer days, when the temp starts to cool off you can bet the fishing is just heating up.

Night fishing is no new-found topic. It’s been around for years, and yet there still doesn’t seem to be half the pressure on the water at night as you’ll see in the daytime. Most of the pleasure boaters are land bound and a lot of the bass fishermen just aren’t fans of the low-visibility lifestyle. But make no mistake, bass feed at night, especially in the summer months, and Elite Series pro Greg Vinson takes full advantage.

The hectic schedule faced by a touring pro leaves little time for fun fishing. Though being a pro angler is fun in its own respect, the long tournament days and pressure packed practices don’t really allow anglers to slow down and just enjoy fishing. So as the schedule starts to slow in the summer, Vinson finds his way back out to his old stomping grounds in search of a few bites at night.

“I used to fish almost every night growing up,” said Greg Vinson. “There’s just something about fishing at night that is exciting. When you set the hook, you have no idea what’s on the end of the line until it’s in the boat.”

Cutting his night teeth on Lake Martin, a clear-water, highland-like reservoir, Vinson spent most of his time fishing pier lights.

“I fished lights so much early on that it was years before I realized you could even catch a fish at night that wasn’t around a light,” Vinson said.

Fishing lights, whether it’s the traditional above-water lights or the newer, under-water lights, is a completely different technique than fishing in purely dark conditions. It’s actually a lot like fishing in the daytime. Crankbaits, jerkbaits and shaky heads can be used to pull fish from around lights with more natural color choices than you would expect to use in areas void of light.

“Bandit 200’s and Salt Licks rigged on shaky heads have always worked well for me,” said Vinson. “One of the real keys to fishing lights is focusing on the halo area around the light where the light starts to fade back to darkness. The fish use this area as an ambush point and that’s where you’ll catch most of your fish.”

When you venture away from the lights, there are several things to pay attention to that can help you catch more fish. Anything that helps fish track and find a bait is a benefit and anything that detracts from a fish locating a bait is a hindrance. At night, you can use a lot of the same tricks that you would use in a low-visibility or muddy water situation in the daytime. Rattles, scents and vibrating baits all up your chances of drawing a fish in at night. A heavy wind or a lot of current can actually be a negative at night.

“This time of year the wind always helps in the daytime, but at night a little ripple is all you want,” said Vinson. “A lot of wind and current makes it hard for the fish to track your bait at night.”

Vinson does use JJ’s Magic to entice fish and believes that it really helps convince the fish to commit to the bait when they bite, but the most important trigger for the night bite is vibration.

“When visibility is low, a fish’s other senses are enhanced,” said Vinson. “One of the biggest things fish rely on in lowlight conditions is their lateral line. Bass can pick up on vibration through their lateral line and identify the size of objects around them to determine if they are prey items. They can then track the item and attack it even though they can’t see it.”

Large profile baits that displace a lot of water are great at night because they are easy to track and give a fish the best chance at seeing them. Vinson’s bait selection is always dark. He’ll hold the bait against the night sky and says that anything with a sharp profile warrants a cast or two.

Big worms like the 11-inch C-Mac work well bounced along the bottom. Black buzzbaits are a favorite for a lot of anglers at night because they make a lot of noise that is continuous and easy to track. But for Vinson, his favorite thing to throw has to be a night blade.

“I’ve only been fishing a spinnerbait at night for about 7 or 8 years now, but it’s definitely one of my favorite things to do,” Vinson said. “It’s almost like fishing a jig.”

Instead of firing the spinnerbait out and burning it back like you might during the day, you have to really slow down at night and work the bait. Vary the retrieve and pump it from time to time to trigger strikes.

“I like to throw a big profile spinnerbait at night with a lot of vibration. My favorite is the 3/4-ounce Davis X-Wire with a No. 4 to No. 6 Colorado blade,” said Vinson. “I’ll beef up my spinnerbaits too by adding a trailer. A soft plastic that puts off a lot of vibration is good. Lately I’ve been using a black-and-blue-flake NetBait Kickin’ B Chunk with a black-and-blue skirt. That combo works really good.”

“One thing I have noticed is that fish will venture farther from the cover at night to chase down a bait than they would in bright, sunny conditions,” said Vinson “If you can get your bait close to whatever you are targeting, they’ll usually come out and get it.”

Summertime night fishing can be a welcomed reprieve from scorching hot days where the only thing scarcer than shade is a bite. So head out and give it a try for yourself if you’re not a fan already and you’ll find that there are few moments more exciting than a foot of slack suddenly knocked in your line by a 4-pounder. Some may say the early bird gets the worm, but there’s a reason the owl hunts at night too.