It’s hot. The middle of summer. The fishing seems to have slowed. The deep bite that has been so good the last couple of weeks or months seems to have evaporated. The bass seemed to have left. Most of the time when bass leave, it’s because their food left. Or they’ve found a better food source. Or they’ve gone shallow. Yep. You can catch bass in 2 feet of water when it’s 90 and 100 degrees out on a still relatively unknown minnow fishing pattern.

On many fisheries across the nation, from large reservoirs, expansive river systems and even small local lakes, their is a phenomenon where minnow fry congregate around shallow cover. It could be shad, brooks minnows, spot tails, or other minnows native to your fishery. The young baitfish congregate around shallow cover like wood, grass and even at times themselves. They haven’t learned the predator prey relationship.

There is bait and oxygen shallow, and the biggest bass move shallow for a time. I’ve had a tremendous success this summer looking for bigger bass that have broken away from the schools and are taking up residence in other areas capitalizing on the shad fry pattern. Turns out I’m not the only ones having success with this pattern.

FLW Tour pros Jonathan Newton and Terry Bolton have both been doing well chasing small pods of bait around in shallower water. Here are some of what we and those anglers have found this summer chasing bass shallow.

Jonathan Newton finds big bass hovering under and corralling shad fry on his lakes in Alabama in the summer.

How to find the best areas

Where to start is often the biggest question you’ll ask yourself in a day of fishing. Fortunately, when chasing this pattern around the lake, you’re looking for one easily identifiable variable — visible baitfish. Often before we see the cover the bass are holding in, I see a darker spot up ahead in the water with a good pair of polarized sunglasses.

Tossing a bait up past and working it into the school is often the best approach. “I think if you can use a bait that will cause that ball of minnows to spook and scatter or split for a second, you stand a much better chance of catching the bass that is nearby,” Newton said. “I think when that bait separates, it shows your bait to the bass as the different one on which they often key.”

But where do you find these bait balls. Newton has found them off the main lake on gravel flats, steeper clay and rock banks and even on main lake bars. If the water is clear shallow is relative. You might be fishing over 6-10 feet of water but the bass will come up in that top 1 to 3 feet of water to find the bait.

If it’s muddier, I typically like to get a little shallower and throw at visible balls of bait or wood cover holding bait.

Points can be really good, but my favorite place is probably the back of a big creek or river arm on flats and pockets with isolated wood cover or docks. It seems those type areas congregate the baitfish fry and the bass in those areas are often resident fish that expose themselves around bait.

Newton’s go to bait in Alabama for this pattern is a  Zoom Super Fluke in Pearl. He likes to fish it on a 4/0 round bend offset hook. He’s often fishing a bit clearer water. For dirtier water he likes a small square bill or lipless crankbait. I prefer a spinnerbait in dirtier water, while Bolton opts for a Rapala Scatter Rap Crank or Storm Arashi Square 3 for targeting bass around shallow pods of bait.

I myself prefer a Strike King KVD Finesse Spinnerbait, or a Megabass Knuckle 60 or rattling square bill of some sort. Other good options include vibrating jigs, swim jigs and even small swimbaits.

It’s fairly easy to do well when you see bass actively feeding and busting on the balls of bait. But often times, if you see the bait jump and flinch, it can mean a bass is around, and the faster they swim the more it generally means they are being corralled by bass who are fans of Shark Week. I will cast ahead an try to run my bait just under the schools to see if I can draw a strike.

I’m constantly scanning the flats and points for dark spots. I want to see a piece of cover or often a cloud of bait that are around a piece of cover I can’t see long before I get close to it.

Docks can get real good this time of year if you see a lot of small baitfish hovering just under them. 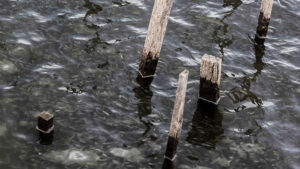 Baitfish fry like minnows and shad congregate around hard targets and each other for protection from gamefish.

Even if there are no targets, you can find big bass wandering on shallow flats points and main lake bars chasing the balls of bait. Sometimes there doesn’t even have to be anything to throw at. Just having groups of the small fry in the area automatically increases your odds that a bass is nearby.

This pattern comes along each year on many fisheries. You have to pay attention and keep checking for bait balls of small fry. The pattern may only last a week but on cooler summers like we’ve had this year it can last several weeks.

“I’m seeing fish act now like they act in the fall,” Newton said. “I could see us having a couple good months on this pattern just because of how crazy the weather has been this year.”

Bolton echoed those statements. “I’ve had some good days shallow this summer. I had one afternoon right after a storm where I caught a 6-pounder and then 7-pounder on a Scatter Rap in 2 feet of water just throwing at minnows.”

I too have had some fun days for the last several years fishing shallow in the heat of summer. I constantly am on the lookout for the baitfish fry and when I see them grouping up on isolated targets, I put down the offshore tackle and pick up my roll casting rods and start covering water and hitting the obvious bait and hard targets to find big bass ready to feed on the minnow fishing pattern.