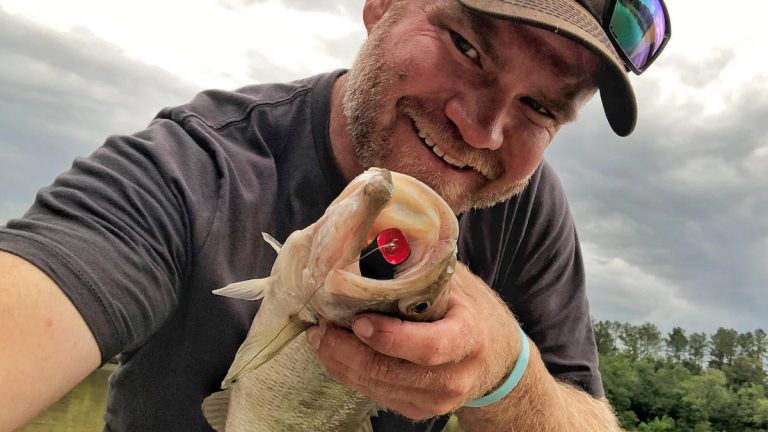 Each summer, in a few special little corners of earth, a magical thing happens. A few shorelines, little points and small pockets of fisheries come alive with thousands of tiny fairies. Delicate, dainty, wish-granting little fairies that hover over the water’s surface and deliver what every angler wishes for all of his life.

I’m talking about mayfly hatches. And if you can’t tell, they hold a pretty special place in my heart. These are one of the coolest things you’ll ever experience on the water. If you’ve never witnessed one, there are a lot of parallels between mayfly hatches and shad spawns, should you have been fortunate enough to have witnessed the latter at least.

What, when and where

Mayfly hatches are a common occurrence in the summertime across North America and the world. The adult mayfly only lives for a day or two and during that short window, they lay eggs in water that later hatch into larvae. The larvae live in the water for roughly a year before transforming into adult mayflies which then lay their eggs and die, continuing the perpetual cycle.

What this creates from the angler’s perspective is a concentrated food chain of insects, baitfish and big bass. As the bugs fall into the water, the bream eat the bugs, the bass find the bream and the angler interjects himself into the equation to take advantage of the whole situation. It’s a beautiful thing.

The locations of these mayfly hatches are pretty steady year to year, since the hatch of one year is dependent on where the eggs were laid the previous year. On some fisheries, there tends to be one giant hatch each year. On others, there are multiple hatches throughout the summer months. So once you find a hatch, be sure to return to that same area year after year in search of another, sometimes even finding it again week after week as there can be another hatch cycling through every few days in some of these places. 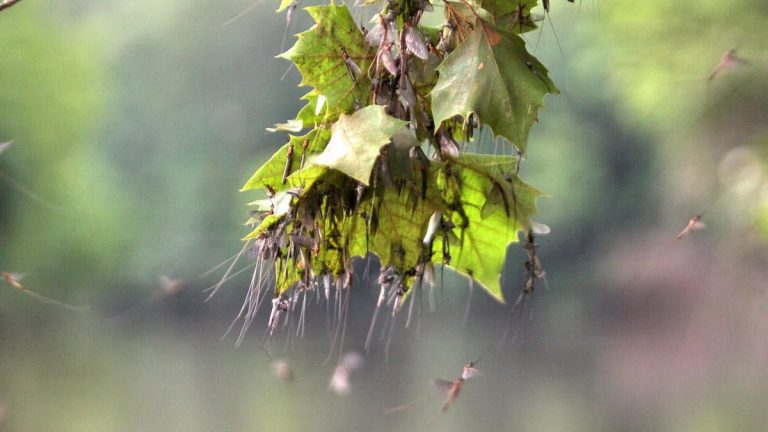 Similar to the shad spawn, mayfly hatches are the most active in low light. During the first and last 15 to 30 minutes of daylight, thousands of these little morsels will depart from the shelter of the leaves to which they cling during the heat of the day and take flight, creating a swarm so thick at times that they literally darken the sky. There are often so many of these little flapping wings going at the same time that they will generate an audible hum in the air.

As the mayflies exhaust themselves, they fall to the water where dozens of baitfish, small bass, catfish and other species are waiting. The surface comes alive as these fish start feeding on the mayflies. But the real action is about to begin as big bass zero in on the distracted bream, bluegill and other small baitfish that are so busy feeding, they lose sight of their own vulnerably.

These are the windows when you have the best chance to catch the most and biggest bass you’ll catch around a mayfly hatch all day. Again, this is similar to a shad spawn. But where a shad spawn is basically dead during the middle of the day, you can create little feeding frenzies around a mayfly hatch by deliberately casting your lure into a bush and knocking a bunch of the resting mayflies into the water. Immediately, the small fish start feeding on them and the big bass will often jump right back into the mix.

Now that you’ve found a hatch and know that there are critical windows, what do you throw? Well, whatever you like to some degree. Baits that mimic feeding bream and bluegill are the best in my opinion. But, you could literally throw nearly anything into the mix here and stand a chance of getting bit. So if you’re just fun fishing, these are great opportunities to develop confidence in lures like glide baits, wake baits and others you might otherwise find bites few and far between with.

But if you want to make the absolute most of a mayfly hatch, maximizing the output during those windows is key. To do that, I believe the absolute best bait for the job is a popping frog, the SPRO Bronzeye Poppin’ Frog 60 in particular. As far as I’m concerned, there has never been a better bait created for this type of fishing.

For one, it perfectly mimics a baitfish feeding on mayflies. A little twitch and a pause, twitch and a pause keeps the bait right in the strike zone and makes it almost impossible for a bass in this setting to pass up. Secondly, it has a fantastic hookup ratio, which is what sets it apart from my second -favorite bait for mayfly hatches, that being a popper. The two big, bold hooks of a popping frog outpaces the thin-wired trebles of a popper in keeping bass pinned and hauling them to the boat. Third, it’s a great bait to throw into the bushes in order to knock mayflies into the water during the heat of the day. After shaking a few flies into the water, you can typically just snatch the frog out, where you’d likely have to go and get a popper or other bait if you were to try that.

All that being said, other baits like buzzbaits, spinnerbaits, squarebills and vibrating jigs also work exceptionally well and are baits I’m sure to add to the rotation anytime I’m fishing around a mayfly hatch for an extended period of time. Basically, pick a bait that you have confidence in that also mimics a bream and you’ll likely get bit. 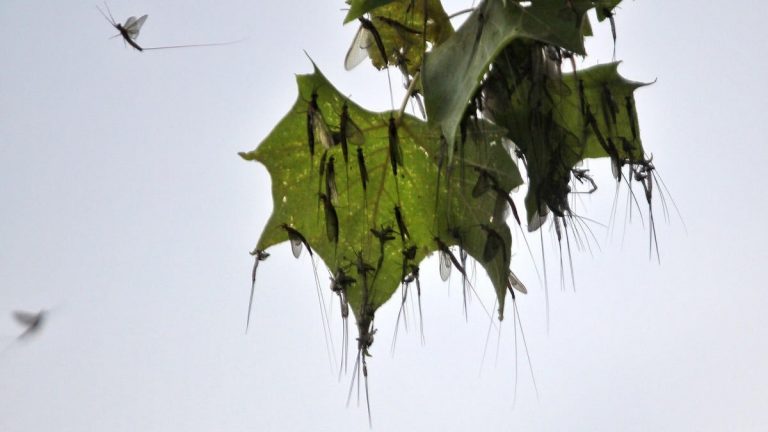 Mayfly hatches create phenomenal fish-catching opportunities. There are few events in all of bass fishing that are as productive as a mayfly hatch. Understanding that these are rare occurrences though with specific feeding windows better equips you to take advantage of a mayfly hatch once you do find one.

Pick a bait with a good hookup ratio, put it in the middle of the feeding frenzy and get ready. If the bite dies down, rotate through other baits and remember you have the ability to spark an additional feeding frenzy by knocking a few of the resting mayflies into the water. And don’t forget, this time next year you’ll likely find the next generation right where you left the current hatch.