In part one, we discussed understanding bass on a sonar, a common function of most every depth finder available today. We touched briefly on fishing for bass on the sonar and in part two we’re going to expand on pursuing bass suspended over deeper water, especially those relating to but not necessarily on cover.

We have many years experience chasing bass on clear-water reservoirs like Table Rock, Beaver Lake, Lake Lanier, Bay Springs and various other highland impoundments where we’ve seen a lot of situations where you could not only find bass with your electronics, but actually interact with the bass on your sonar and down scan.

But we also wanted to get another opinion on pursuing bass suspended deep over cover like brush piles. For further clarification we tabbed touring FLW Tour pro Brett Hite of Phoenix, Ariz. Hite is a master at catching bass in deep water with techniques like drop shot, fish head spins and topwater.

“This time of the year, I’m going to stereotype a lake, especially a highland reservoir type lake,” Hite said. “If it’s super hot out and the water temperatures are in the 80s and 90s, I’m going to focus on main lake structure and brush along that structure. The fish are relating to the thermocline and it’s easier to find them in one area, pattern them on a certain depth and then find cover in that right depth.”

Hite starts his search on main lake areas like points, islands, humps, river channel turns and more defined features on the lake bottom. He’ll then start idling the area while watching his Humminbird 1198 sonar, side imaging and down imaging all at the same time. When he sees a brush pile or tree, he will mark it with a waypoint but depending on the depth he may or may not stop and fish it.

Hite’s experience has shown him that you can often spook bass away from the brush, even in deep water and you’re often better off to mark several pieces of cover and then come back to the first one and fish back through them to give the fish a chance to settle back down. Hite wants to find as much cover in one area of a lake as he can so he’ll have options come tournament time.

Once he had marked several brush piles, he’ll start a ways off from the pile and get on the front deck while watching for fish on his sonar and down imaging. He’ll make a couple blind casts to the target in hopes of getting his bait down near or just above the cover, and he often catches big fish this way.

“One thing that has helped me this year is the ring option on my waypoints on my Humminbird graph,” he said. “I can set a ring out from 50 feet of the pile, and when I get to that ring, I can start firing at the target once I have my look ahead arrow pointed right at the brush pile as I move forward on my GPS screen.”

Hite reiterated some of what we talked about in bridging the gap, in that while you may see arches when you idle over suspending bass with the big motor, as you creep along on the trolling motor, the bass will appear as a solid line on the screen.

Anglers should realize suspended fish around cover often move and displace when you catch a fish. Hite finds that if he catches one or two out of a brush pile or tree, he’s probably done all the damage he’s going to do there.

“You see it all the time, I start to see just a little clutter on the screen so I know I’m on the edge of the brush pile and I drop my worm into the pile. When I hook a fish, a bunch of lines magically appear off the bottom and from all around and come up with the fish. Next time I drop the worm, I can’t get a bite. It’s like you move all the suspended fish off the target.”

Hite simply moves to the next pile when this happens and starts his stealthy approach over again.

The beauty with sonar is you can watch the bass move up or down in the water column and react to something like a drop shot worm in their zone. Hite admits though that sometimes you’ve got to pull a few special moves on the fish to get them to react and go on a lure around the cover.

“When I see a fish I will drop my drop shot Roboworm or Senko on them as quick as possible,” Hite explained. “I will start deadsticking it near the bottom or just at their zone up off the bottom. Then I will just shake it a little and pause then shake a little and pause. If the fish don’t react. I will reel three or four handle turns and then open the bail and let the bait fall again. A lot of the time, that move triggers fish.

This works especially well when it’s high skies and slick water. It seems suspended fish can be more aggressive when it’s cloudy and windy. But sunny skies can often be better for ultra clear water when the fish are deep as it increases their strike zone. It’s definitely something you have to build experience trying in different situations.

Tackle for suspenders around cover

Hite has found that basically three lures can help him cover the zone. Oddly enough it’s the same three we reach for and there are others as well. For Hite, a drop shot is his go-to bait of choice. He’ll either use a 6-inch Robo Worm rigged weedless on a Rebarb Gamakatsu hook or a 5-inch Thin Yamamoto Senko rigged wacky style on an octopus or weedless wacky hook for cover laden areas.

The other two baits he’ll choose are a fish head spinner like the Sworming Hornet or a topwater if the fish are suspending high over shallower brushpiles or in ultra clear water. We often throw a single swimbait and shaky head in these same situations.

But most of the time, Hite is reach down and picking up a drop shot when he’s first targetting suspending bass around cover like brush piles and standing trees in deep water.

His approach is simple. In practice he rigs three or four rods with drop shots. He’ll use different leaders between his hook and weight. He’ll try different colors, citing that he often starts with darker Roboworms in low light hours and then moving towards more translucent and shad patterns later in the day during the summer. He chooses a 1/4-ounce cylinder weight 95 percent of the time for his fishing in water up to 50 feet in depth. Beyond that or on extremely windy days, he’ll go to a 3/8-ounce weight to maintain good contact with the bottom, the cover and the fish he sees on his graph.

He prefers a medium-heavy 7-foot Evergreen Spin Cobra rod and Revo Premier spinning reel. Hite recommends buying the best drag system in a spinning reel you can afford. The medium-heavy power gives him the leverage to hook and move a fish away from the cover and get them headed to the boat and the smooth reel drag gives him the ability to land those hooked fish when they surge.

He sees the advantages to both braid and fluoro with this combo, but chooses braid for the same reason. He’ll use 10 to 20-pound Sunline SX1 Braid with a 7 to 10-pound Sunline Sniper FC fluorocarbon leader. He wants to turn a big bass up and away from the cover. And braid eliminates his line twist. Straight fluorocarbon will let the bait fall faster but the line will twist more. The braid with fluoro leader gives him more control and the line twist doesn’t inhibit the lure’s action, his ability to feel bites or his hooksets like twisted fluorocarbon can at times.

If the fish are aggressive, like often happens on choppy water conditions or overcast skies, he reaches for the Fish Head Spin or a big topwater.

“You have a better chance I feel catching a kicker on a topwater if the bass will make the commitment and come all the way up to get it,” Hite said. I will sit way off the brush piles or trees and make long casts past the target and try to bring it through their zone from several angles.”

If the fish won’t commit to the topwater, he’ll thread a Yamamoto swimbait on a fish head with an underspin and put it on a rod with 10 to 12-pound test Sunline Sniper FC with a Revo 6.4:1-gear-ratio Premier and a medium-heavy power glass rod like he’s well known for using with vibrating jigs. Because the bass will often come up and try to kill the fish head spin rather than eat it, he just keeps reeling the bait until the rod starts to load back and then he just leans into them. With the glass rod he’s able to keep the fish hooked up and they load on it better instead of being ripped out of their mouths with faster rods. 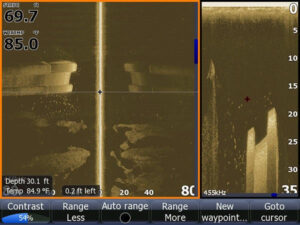 We caught a few bass pretty quick with jigging spoons and drop shot worms but most of the fish were the smaller aggressive bass suspending high in the water column. I reached down and picked up a single Berkley Hollow Belly swimbait on a 3/8 ounce Big Hammer jighead. The first cast I counted the swimbait down to about 10 feet and then started a pretty slow retrieve. As I got closer to the boat I started reeling a little faster and a fish just locked up the reel.

A short fight ensued and I swung in a spotted bass weighing more than 3 pounds. That was all the clue I needed. I went on to catch several more nice spotted bass and a nice largemouth on the swimbaits in the shaded side of the bridge. And it seemed a medium retrieve was better as the fish were very aggressive. If you reeled it too slow, you didn’t get a bite.  You had to buzz it over their heads and they would stop the reel handle when they struck.

It’s easy to scan bridges with side scan, down scan and sonar technologies. The fish will often suspend in a group on one corner or side of the bridge. Once you figure out their depth and area they are relating to, it’s just a matter of getting your presentation and retrieve speeds down. You can catch them casting very light shaky heads and just letting them fall through the school. A topwater can even catch them at times although it seems something sub surface is better.  A soft jerkbait and hard jerkbait alike can catch them at times.

Suspended bass scare a lot of bass anglers away. But often it’s just a matter of finding what piece of cover or structure they are relating to and then presenting something in and around their zone to get them to react. Spend your time idling and looking with your electronics for arches and lines relating to obvious cover. Mark several good looking piles, tree tops, bridge pillars and then circle back and fish them after the fish have had a chance to settle back down. Soon you’ll be a master of Video Game fishing like the pros.