There are some huge advantages utilizing plastic bass fishing crankbaits in regards to paint schemes, durability and consistency in the duplication process. Molded plastic is much easier for rattle placement and the cost for these baits is more reasonable in most cases. Plastic divers dig well, stand up to abuse better and most of the new ones get to depth quickly making them prime choices for ledges and points.

Balsa and cedar, on the other hand, are more expensive, tougher to find and can be a bit more difficult to work with for the builder. Duplicators have increased the accuracy and there is just something very special about a wood plug to me.

The key difference, in my mind, between plastic and balsa divers is rise rate. Let’s dig into why that is important.

Until recently, balsa was readily available and easy for craftsmen to shape. Wind turbines use a lot of balsa and it has become a bit scarce as a result; cost has increased too.

Over the years the number of wood plugs being built has decreased but leading manufacturers like Rapala, W.E.C., Yakima/Sisson and Bagley’s still produce top-quality balsa plugs and have a large following as a result. Handcrafted balsa has significant advantages for seasoned crankers especially in the hot summer and around wood cover; their action simply cannot be matched.

There are a few cedar builders like Poe’s Super Cedar and Stanford in the marketplace too but balsa is still the king. Over the years, other woods such as basswood have been tried, but overall fishability and ease in shaping has proved much better with balsa. It holds paint better too.

Balsa guru Ed Chambers of W.E.C. is meticulous in both design and paint schemes and folks clamor just to get a hold of one of his baits. Rapala, Bagley and Lee Sisson are the same way. Each bait has to be perfect and their reputations as premier lure builders gets them an almost cult-like following.

Although they’re aerodynamic, balanced and can be cast long distances, plastic and cedar do not have the rise rate of balsa.

How important is rise rate? It can be huge when fish are schooled up chasing baitfish. I like to crank below the shad schools and let the balsa rise up through them. I have gotten some huge fish over open water with this technique. Run the bait at a high speed to get it below the school and let it rise and start cranking again. They hammer it.

In the summer I like to vary my retrieves. Sometimes it is a constant crank, sometimes stop-and-go and little things like reel gear ratio or line diameter can be differentiators. I use 5.3:1 reels on occasion for deep divers but have found 6.4:1 ratios best overall. Long casts are mandatory for balsa. You can use higher gear ratio reels with balsa and they seem to pull easier at times. When stopped, balsa rises very quickly and that can ignite bites.

I guess being old school, where nitpicking the little things still matters, has its advantages. I look at construction and appearance as differentiators. I see balsa plugs as a work of art and have a ton of experience with them and in nearly 40 years of throwing them from Florida to Minnesota, I can confidently say they work.

It may be a confidence thing but there are some situations in which wooden plugs outshine plastic and I think it has to do with how quickly they rise to the surface when stopped. Small tweaks by builders with bills, paint and even line ties and hook hangers can be significant. The shape of the bait is critical too. Some of the best divers wobble side to side on the rise and I look for those.

I like slender profiles for fishing deep when using balsa. Fat bodied balsa baits are best fished shallower in my opinion.

Not all balsa is created the same and even small differences in where the balsa comes from can be huge. Summer heat, water temps over 75 degrees and fish positioning off points and flats scream “balsa” to me. Don’t get me wrong, I use a ton of plastic diggers but there are times when balsa simply outshines plastic.

The consistency of balsa makes it cast like a bullet. The density of that wood allows it to be balanced and even deep divers with large bills don’t seem to catch as much resistance as their plastic counterparts when matched up body style to body style.

Another characteristic of balsa that works exceptionally well when water temperatures near 80 degrees is rise rate. A stop and go retrieve works well in my area during the summer months and balsa allows the bait to rise at a higher rate and curious fish who follow the bait when retrieved cannot stand a bait on a horizontal rise. Most plastic divers will rise as well but that rate is much slower than balsa.

Another huge advantage of balsa fished on the bottom is its ability to rise upon deflection. They shine around wood; a quick snap of the line can quickly allow the bait to float off the object. They float off the object backwards a bit too and that can mean a few bites here and there you may have not gotten otherwise.

When “bumping the stump” the quick rise can also trigger bites from neutral fish and due to their consistency will again start digging immediately when again cranked. 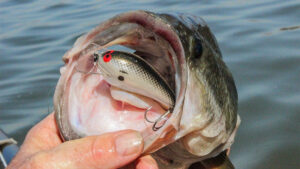 Balsa is a very durable wood and, when properly treated, holds paint well. I have several old Rapala DTs, Poe’s 400s, Stanfords and vintage Bagley baits that have been heavily fished that still look new.  They are slick to the feel and put off pressure waves that at times can be much different than their plastic counterparts. They sashay side to side with a wider wobble when pulled. Both have their place but in higher water temps balsa gets my vote.

I like the homemade feel of balsa too. Replication techniques have improved greatly over the years but they still each have their own personalities. Every now and again I find one that out-fishes others that look just like the others but it’s a character thing. After fished a while they can fade, chip and scratch but that adds to their personality. Some of my best balsa baits are the ones that look the worst.

Hardware on many of today’s balsa plugs are “screwed and glued” and hold up well even when pulled free from a stump or brushpile. Some of the best manufacturers’ hook hangers on these baits allow for a more free-flowing hook that keeps the fish from getting leverage and throwing the bait. I use split rings on balsa baits line ties in particular when they are positioned on the nose of the bait. 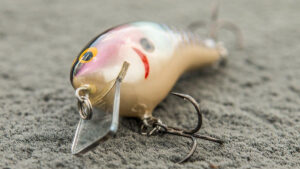 Hook sharpness is key too. I check the hooks on my baits all the time and especially when fishing rock. Depending on the bait and the depth plus how fast I want them to rise will also make me change out the hooks too. Bigger hooks slow the rise rate.

The longer I fish the more I see that each bait type and material is like a tool in the tool box. No two baits are created equal. There are times when plastic divers make the most sense and others when balsa shines. Trial and error, time on the water and the conditions dictate the best time for both. Experiment and give balsa a try this summer. Rise rate can be huge and may give you more bites over just pulling them. Stop and go when conditions present themselves and I bet you will see the advantages too.

Walker Smith did an excellent piece with Kevin Short some time ago on why he chooses balsa that is worth a read too.