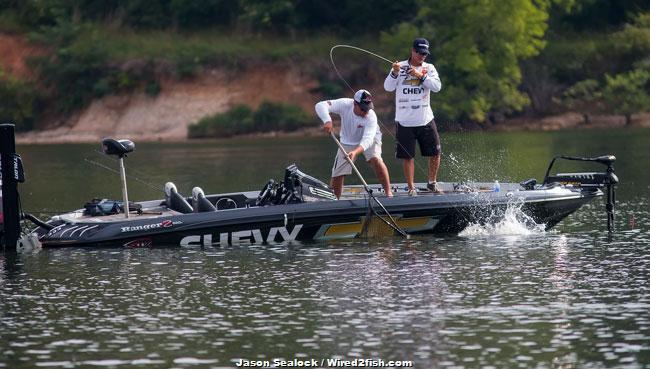 If the nomadic nature of late-summer bass is flustering you, don’t overlook the effectiveness and sheer excitement of targeting schooling bass over open water. It might take a bit of practice to perfect your technique, boat positioning and presentations but when the light bulb clicks, hang on for dear life—it’s some of the most fun you can possibly have.

FLW Tour pro Anthony Gagliardi relied on his expert ability to read and catch these open water “schoolers” en route to becoming the 2014 Forrest Wood Cup Champion on Lake Murray. His seven tips will help you make the most of these gypsy bass.

There’s no doubt this is a unique time of year for bass anglers. We’re offered two distinct options and can reasonably expect success with each—we can grind it out in shallow water or take the time to locate schooling bass over deep water.  Gagliardi chooses the latter due to the lack of fishing pressure and the bass’ unusually big appetite.

A different breed of bass—“I believe there is a certain segment of the bass population that rarely sees the bank throughout their entire lives,” Gagliardi said. “Most of these schoolers live offshore and chase forage such as shad and herring. You don’t go out and graph them like TVA fisheries, so they’re not as easy to find. This added degree of difficulty results in much less fishing pressure and more catchable bass.”

Heavier fish—“This time of year, the schoolers you catch over deep water are generally much healthier and fatter than shallow bass,” Gagliardi said. “They have unlimited access to high-protein meals which means a 16-inch schooler is often much heavier than a 16-inch bank fish.”

More times than not, they’re there for a reason

Perhaps the reason for the low fishing pressure of schooling bass is due to a common misconception among anglers. These fish have a strange way of showing themselves when we’re least prepared, which tempts us to believe it’s a totally random occurrence. So how are we supposed to predict such arbitrary behavior?

“Schooling behavior is random to an extent, but there’s often a rhyme to the reason,” Gagliardi said. “If you’re not purposely targeting these fish, your chances of catching them are very slim. But when you’re paying close attention to the areas in which they’re breaking the surface, you can figure ‘em out in a hurry.”

There are two important things you can do to increase your chances of success and attentiveness plays a key role in both.

It’s rarely a fluke—“When you see bass start busting, they’re usually there for a reason,” Gagliardi said. “There’s something down there that attracts the bait or gives the bass a prime ambush point. These can be things like small points, humps, ditches or even deep brush piles. So even if they’re too far away to cast towards, make it a point to come back and graph that area. When you notice some sort of irregularity, that’s when the light bulb turns on. These are places worth revisiting regularly.”

Keep your head on a swivel—“When a lot of folks are fishing a point and they see a fish break behind the boat in 50 feet of water, they assume it’s random,” Gagliardi said. “But like I said, that’s rarely the case. The next time you fish that point, you need to be in deeper water where you saw that blowup. Even if they’re not breaking the surface, you can call sometimes ‘em up with a walking topwater or soft jerkbait.”

When you see a fish chasing bait on the surface, your window of opportunity is incredibly small. Your reactions need to be lightning-fast but strangely enough; Gagliardi’s approach involves a great deal of patience as well.

“As a general rule, if I’m fishing a schooling bite, I won’t make a cast for 10 or 20 minutes unless I see a fish break the surface,” Gagliardi said. “If you’ve made a long cast and all of the sudden a big one breaks near your boat and you’re unprepared, you’ve lost your chance. I believe this approach puts the odds in my favor by allowing me to remain ready and make a super-fast, accurate cast.”

“In the two seconds it takes for your lure to land, the bass can be 10 feet away. That’s why it’s important to pay attention to the direction the bait is swimming– you can actually ‘lead’ the fish like you’d do when bird hunting.”

This hurry up-and-wait approach has proved invaluable throughout Gagliardi’s career because once a bass catches a shad or herring, it’s game-over for the angler.

“When they finally catch that herring or shad, I think they immediately return to deep water,” Gagliardi said. “They’ll go even deeper than where they were originally suspended in order to escape the competition and, in a way, eat in peace. So if you don’t get your bait to the bass before it eats the real thing, it’s not going to come back for your lure.”

The clearer, the better

Open water bass rely heavily on their sense of sight when feeding, making it imperative to consider water clarity when looking for a hot schooling bite.

“You can catch schoolers in dirty water, but they will likely be in shallow water which is a totally different beast,” Gagliardi said. “You really need some clarity when you’re fishing for schoolers over deep water. These fish feed based on sight and it can be very difficult to get them to commit to a lure if they can’t ambush it from far away.”

If you’re not seeing bass breaking the surface, don’t assume your chances of catching schooling fish are gone. Gagliardi has a lot of success by “calling them up” on topwater lures from the depths by targeting offshore structure and brush piles known to hold large quantities of bait.

“It’s very possible to attract the bass from deep water without even seeing blowups,” Gagliardi said. “In reservoirs with limited visibility such as Lake Murray, I can usually call ‘em up if they’re suspended in less than 10 feet. If I’m fishing a super-clear lake such as Lanier, I don’t have any reservations casting a topwater when they’re suspended in 25 feet of water. The clearer it is, the more likely they’ll see your lure.”

You won’t always see them on your electronics

Gagliardi will, however, utilize his electronics for recon purposes. If he notices a large school of bait near the surface, he’ll drop a waypoint and return to the area later as it could be a potential target for schooling activity.

It’s not uncommon to hear professional anglers tell stories of a single lost fish shutting off an entire school of bass. This can certainly happen when you’re fishing for deep bass positioned closely to structure, but it’s not necessarily the case when chasing schoolers.

“I lost a four or five-pounder on the last day of the Forrest Wood Cup and caught another good one on my next cast,” Gagliardi said. “I don’t think it matters as much with this technique. When I release these schoolers as I’m culling, I’ll watch them swim all the way to the bottom on my sonar—it doesn’t matter how deep it is. I’ve never really seen a lost fish kill the schooling action.”

If you can’t get the shallow bite fired up yet, don’t overlook schooling fish. If your favorite fishery is relatively clear, you might just find a new “favorite” technique. There’s no substitute for time on the water, but heeding Gagliardi’s expert advice can drastically shorten your learning curve.