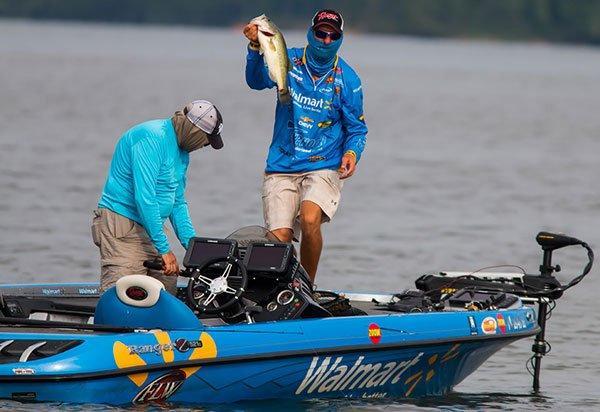 There are times when going against the grain pays big dividends in life and this often holds true in bass fishing. When the unbearable summer heat sets in over your favorite fishery, don’t overlook the power of bass fishing in shallow water. Although many of us are guilty of assuming the best opportunity for excellent fishing lies in deep offshore structure, it’s not uncommon to catch monster bass in just inches of water.

We spent some time documenting FLW Tour pro Wesley Strader’s recent tournament on Kentucky Lake. On a world renowned offshore fishery, we found often found him fishing—and catching—in less than one foot of water. So what gives?

He’s a big believer in dissecting shallow water throughout the summertime and according to him, there are 5 things you can do to drastically increase your chances of success.

Understand the pros and cons

As with any bass fishing technique, it’s important to understand the advantages and disadvantages of targeting shallow bass in the summer. When you see the majority of your fellow anglers parked on offshore structure, it takes some gutsy decision making to commit to the shallows.

“There will always be shallow bass regardless of the time of year. Targeting them in the summer is an excellent way to catch big ones and avoid the crowds.”

Forced to fish cleanly—“There will always be shallow bass throughout the summer but it can be difficult to find the sheer numbers you’ll see on offshore spots,” Strader said. “This makes it imperative to fish cleanly because missed opportunities are hard to recover from when you’re targeting a finite population of bass. The smallest bobble or mistake can prove very costly.”Comfort level—“If you don’t have a lot of experience bass fishing in deep water, you might have a better chance of catching ‘em if you stick to your comfort zone in the shallows,” Strader said. “Most anglers learn the basics of fishing in shallow water, so naturally that’s where they will feel most comfortable. Everyone fishes better when they’re at ease.”Have it all to yourself—“When you find a solid shallow bite in the warmer months, there’s a good chance you won’t have to share it with anyone else,” Strader said. “Everyone is a little guilty of being programmed to fish deep this time of year, so going against the grain can give you a little extra space. If you don’t like fishing in crowds, this is the way to go.”

Regardless of the conditions or time of year, you can always catch a few bass in shallow water. There are, however, several factors that can lead to phenomenal fishing and supersized fish.

Gizzard shad—“The first day of the Kentucky Lake tournament, a lot of the guys were catching big bass on that giant spoon in deep water because the bass were gorging on gizzard shad,” Strader said. “But there were also some spawning gizzards in shallow water. The moon phase was perfect and they were choking a giant swimbait in just inches of water.”Bream beds—“When you start looking for a shallow pattern, keep a close eye out for any bright-colored circles near the bank,” Strader said. “These are often indicative of bream beds which are a dead giveaway for big bass. Instead of exerting a bunch of energy chasing smaller shad, a bass can feed on bream beds with very minimal effort.”Vegetation—“Oxygen levels can deplete quickly in the summer, which can make it tough to catch bass,” Strader said. “But when I can find submerged grass on my Lowrance, it’s a game changer—it increases oxygen levels and basically acts as an energy drink for bass. Grass fish are going to feed several times each day and it doesn’t seem to matter what you’re throwing. If you find them while they’re feeding, you’re going to catch them.”Dirty water—“When bass feed in deep water, I think it’s more of a visual thing,” Strader said. “So when the water muddies up after a lot of rain, they’ll relocate to nearby shallow water to feed. I wouldn’t want to hang out with my buddies if it was dark and I couldn’t see them—I’d feel uneasy. I believe dirty water bass are the same way. They feel more comfortable in shallow water.”Rising water levels—“Bass tend to move with the water levels,” Strader said. “So if the water is rising, they’ll move shallower. Conversely, shallow fishing gets a bit tougher when the water levels are steadily dropping.”

Bass aren’t likely to swim very far from their traditional summertime haunts, so adjacent deep water is important to Strader’s shallow water strategy. This gives the bass an opportunity to move to shallow water to feed and slide back into deeper water when they’re lethargic—all without using much energy.

“First and foremost, I’m going to spend some time locating giant shallow flats this time of year,” Strader said. “Once I find a flat near deep water, then I’ll start looking for isolated pieces of cover such as sticks, stumps, logs or even duck blinds. The more unaccompanied the cover is, the more likely bass will congregate on it. On a big flat with just a few pieces of cover, you’ll find them concentrated and easier to catch.”

As things progress to the later part of summer, nearby deep water plays a less significant role for Strader because his attention quickly turns to shad fry.

“In the late summer, shad fry will often congregate in the backs of pockets and the bass will absolutely go nuts over them,” Strader said. “They’re about 1 1/2-inch long and they will group up by the millions. Even without electronics you can usually see them hanging out around small pieces of wood cover and big bass won’t be far away.”

Small details make a big difference when developing a strong shallow water pattern. Strader makes an effort to keep his head on a swivel at all times while inspecting each fish he catches.

Check their throats—“On the second day of the Kentucky Lake tour event, I was struggling for a few hours,” Strader said. “I caught a few on a Pure Poison Jig, but they started short striking it shortly thereafter. I thought they were being finicky, so I tried a wacky rigged Zoom Z Nail and caught a nice 4-pounder—and then I saw it. It had a big gizzard shad in its throat, so I picked up a big swimbait and caught some very key fish including an 8-pounder. They were absolutely choking it with both treble hooks, so I knew I was doing the right thing. If I weren’t paying attention, I could have totally missed out on it.”Livewell remnants—“When I’m fishing shallow this time of year, I always drain my livewells and scour them for regurgitated forage,” Strader said. “That can tell you a lot about your pattern and help you fine tune it. Whether you find crawfish pincers, threadfin shad or gizzard shad in there, you can adjust your presentations and tactics accordingly.”

The power of confidence 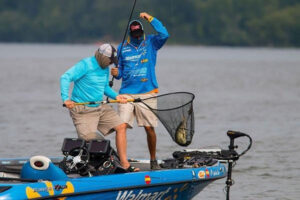 Jason of Wired2Fish was photographing Strader on day two of the Kentucky Lake event and he was amazed by the confidence he exuded. After catching several nice bass, Strader turned to him and said, “You watch. I’m about to catch a big one any minute.”

Fish what others leave behind! Strader doesn’t leave anything behind when fishing shallow flats. While others may bypass seemingly menial pieces of cover, he makes sure to hit ’em. The more isolated it is, the better chance it holds a bass.

Sure enough, just seconds after Jason left the area Strader caught an 8-pounder. How did he know that was going to happen? The answer is simple—confidence.

“Everyone gets those gut feelings every once in a while,” Strader said. “I could tell by the way they were inhaling such a big bait that a giant was going to mess up sooner or later. I absolutely knew it was going to happen. I love fishing shallow and when you’re fishing the way you like to fish, you feel like any minute you’re about to bust a game changer. If you’re constantly scrambling and you let things get in your head, you have a hard time committing to a game plan.”

Beat the crowds this summer and spend some time targeting shallow bass. Even if everyone else rushes to offshore structure, don’t be afraid to take a gamble because it can definitely pay off. If you can understand what makes summer bass move shallow, focus on high percentage areas, pay attention to detail and embrace a confident mindset, you’ll have an excellent chance of catching big bass.