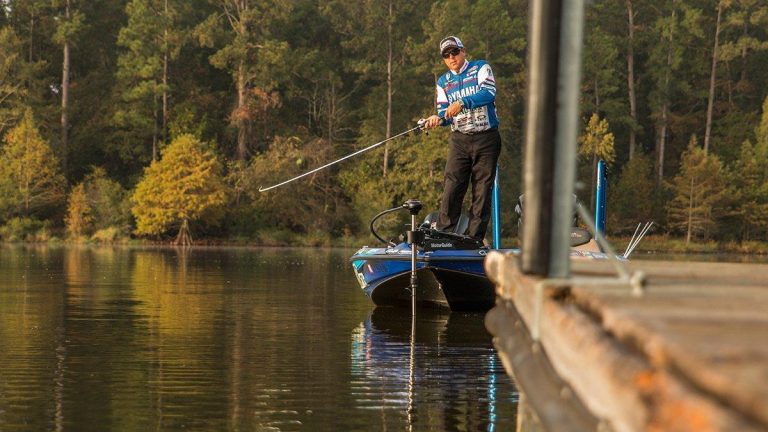 The effectiveness of summer topwater frog fishing is well documented; these lures’ ability to reach and catch heavy-cover bass is undeniable. When most bass anglers think of frog fishing, however, rather stereotypical visions of lilly pad fields and thick vegetation flood our minds. The two go together like, as Forrest Gump would say, peas and carrots.

But there’s much more to a solid frog bite than grass, according to Elite Series pro and frog fishing legend Dean Rojas. He believes that by targeting lesser-known frogging targets, you’ll have an opportunity to catch some huge limits of bass this summer.

Here’s his challenge to you: The next time you go to the lake, bring only a frog rod and ditch the grass. Instead, target these areas and your eyes will quickly be opened to the versatility of these special bass fishing lures.

A quick refresher on the basics

Before taking Rojas’ challenge, let’s make sure you’re putting yourself in prime position to capitalize on the situation. The following points concentrate on the most common questions he receives from fellow fishermen.

Why not flip or pitch?

Pitching and flipping shallow cover is, in fact, an excellent way to catch summer bass. But Rojas likes his chances of a high hookup ratio much more with a froggin’ rod in his hands.

“These hollow-bellied frogs float, giving you the unique ability to present the lure above the cover without going into it,” Rojas said. “So when a big bass attacks your frog, it’s coming out of the thickest cover and the tables immediately turn in your favor—the ball is in your court, not the fish’s. You can quickly get ‘em on top of the water and away from any precarious cover which results in an astronomical landing ratio.”

There are a bunch of frogs out there, so choosing the “right” one can be overwhelming. If you follow Rojas’ rule of thumb, however, you’ll be able to make a quick decision with confidence.

“When I find myself around very sparse cover or open water, I tend to use the Bronzeye Poppin’ Frog 60 more,” Rojas said. “Its cupped mouth moves a lot of water which can call fish from a greater distance. But if I’m skipping a frog underneath cover or into very thick, hard-to-reach areas, I’ll often use the original Bronzeye 65 because it skips across the surface much easier and slides over cover excellently.”

How do I choose a good color?

You’re likely to find every color of the rainbow—and then some—when browsing through the color selection of topwater frogs. Does it really have to be so complicated? In short, not really. While confidence does play a major key in choosing colors, it’s a good idea to start with a few key colors and later expand based on your experience.

In sunny or partly sunny conditions, bass can see very well; this makes it imperative to use natural colors and tones in order to closely emulate their surrounding forage. Rojas suggests sticking with Natural Red, Green Tree Frog and Natural Green Frog for these situations.

In the lowlight hours or on days with very little sunshine, Rojas will start playing with the black, gray and white tones more often. Because a bass’ eyesight is hindered in these conditions, opaque colors will often perform best as they cast a more noticeable silhouette, thus giving the bass an easily identifiable target.

When it’s hot and the sun is beating down on your back, what are you likely to do? You’re going to search for some shade to give yourself some much needed relief. Bass often behave in the same manner throughout the summer months, making dock walkways—the sections connecting the main platform of the dock to the bank—red-hot targets for stellar frogging action. 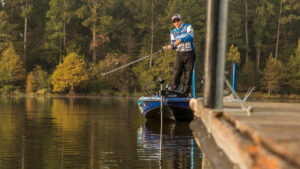 “Cover and shade are the name of the game when you’re targeting walkways,” Rojas said. “Bass feel safe with something over their heads and there just so happens to be a bunch of bluegill that hang out under the walkways, too. It’s a perfect storm that you can’t afford to overlook.”

In addition to the shade and feeding opportunities presented in these areas, the calm water also plays a role in Rojas’ preference. With the summer months comes loads of boat traffic on many fisheries and large waves can quickly upend a shallow-water pattern. Walkways, however, see very little wave action and give the bass a calm spot to utilize throughout the busiest parts of the day.

“If the front of the dock is in 5 feet of water or less, I’ll fish the entire dock until I can dial in a pattern, but more times than not, your bites will occur underneath the walkways. This is a very easy-to-pattern deal, too. You can run it throughout the entire lake and enjoy a lot of success.”

“I rarely see anyone fish concrete seawalls,” Rojas said. “But I’m telling you, they can be absolutely lights-out. Any small irregularities in these walls whether it’s a turn, a small point or an indentation will trap floating debris and create a small mat for the bass to sit under.”

Casting angles are quite important when targeting these areas. Rojas positions his boat parallel to the seawall and makes extra-long casts and places his frog within an inch of the structure. The bass won’t go far from the seawall as it gives them something solid to pin their prey against, so keeping your frog close to the wall for as long as possible will give you a much better chance at big blowups.

We’re all guilty of it at some point: We’re fishing a good-looking area and as we approach a stretch of barren bank, we kick up the trolling motor and speed past it in search of sexier cover. If you can avoid this temptation and stick with it, Rojas believes you’ll be pleasantly surprised at the number of bonus bites you’ll get throughout the day.

“This is where the popping frog becomes a major player,” Rojas said. “Nobody fishes barren banks anymore because they simply don’t look good. But they can be killer spots for both largemouth and smallmouth if you can find some sand or gravel bottom composition. The bass will use these stretches of bank as virtual dinner plates and feed heavily on both blueback herring and threadfins.”

Perhaps the most appealing forage of them all, however, is bluegills. In the early summer, they’ll spawn on these bare banks and create an all-out buffet for big post-spawn bass. Even when the water is hot and the bass know it’s time to go deep, they’ll hang in the shallow a bit longer to fill their bellies on these big panfish.

“There will always be one or two big ones hanging around a bluegill bed,” Rojas said. “But it’s important to stay way back and make very long casts. Make a concerted effort to look for any piece of isolated cover—it doesn’t matter how small it is—as bass will use it as strategic ambush points.”

Riprap banks—or stretches of bank lined with chunk rock—are major bass fishing hotspots. But how often do you see someone casting a topwater frog in these areas? Instead of the more ordinary approaches, don’t be afraid to show ‘em something different this summer.

“I use a SPRO Bronzeye Shad 65 around riprap quite a bit,” Rojas said. “It sits low in the water and provides an excellent hookup ratio in open-water situations. In regards to riprap banks, they offer bass two very important things right now: They can slide out to deeper water when they’re not on a major feed, but they can also access the shallow rocks and gorge themselves when it’s time to eat.”

Much like the concrete seawalls, Rojas parallels these banks and covers water quickly. It’s a good idea to target riprap that has been hit by wind on previous days as the rocks will trap debris and provide additional cover for the bass.

“Bridges are definitely an easy place to find riprap banks, but don’t limit yourself,” Rojas said. “You can also find these banks around main lake points and secondary points. These banks also tend to re-load throughout the day, so don’t be afraid to fish them more than once.”

Undercut banks don’t look very appealing to most bass anglers; they’re often the one area a fisherman will skip in a given creek. Because of this lack of fishing pressure and the close proximity of deep water, they’ve led to some unforgettable days for Rojas. 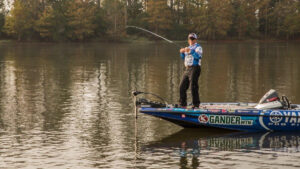 “This is actually one of my favorite places to fish a frog because it requires a lot of the skipping technique that I love so much,” Rojas said. “It’s almost like a seawall because it gives the fish a hard edge they can use for both traveling and feeding purposes. But undercut banks tend to shine brightest in the middle of the day because they can play host to a lot of shad and, like riprap, offer the bass quick access to deep water.”

Calmer water is often found in these areas as well. According to Rojas, you’ll find the majority of undercut banks around creek channels, located off the main lake. So if your only option is to fish on a busy Saturday afternoon with a bunch of pleasure boaters, these banks can offer a little more “privacy” and refuge from gigantic boat waves.

If you want to improve your frog fishing game, don’t be afraid of Rojas’ challenge. Leave your other rods at home, ignore the grass for a day and keep a topwater frog in your hand. Not only will you learn a lot, but you’ll likely catch a bunch of bass in the process.