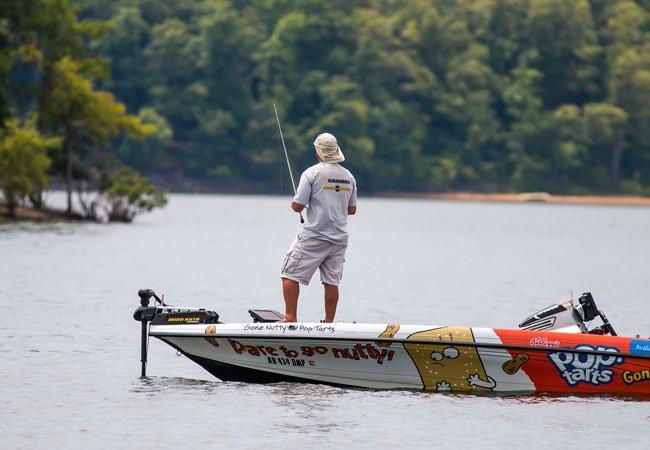 When the heat of the summer sets in, an angler’s skills are put to the test in significant fashion. You’ve been catching nice bass for the last several months and now you feel lucky to get just a few bites throughout an entire day of fishing. So what’s going on? How can someone go from “hero” to “zero” in a matter of weeks?

According to FLW Tour and Denali Rods pro Greg Bohannan, bass start their fall transitions much earlier than we give them credit for. As they begin their annual treks in search of better water conditions and more abundant concentrations of forage, we’re often left fishing in the past.

There are, however, four overlooked transition areas that are known to hold excellent concentrations of these elusive late-summer bass. If you can locate similar structure and cover on your favorite fishery, you’ll drastically increase your chances of finding the mother lode.

It’s no big secret that large schools of bass congregate on deep water structure throughout the summer months. As the oxygen levels dissipate at these depths, however, both the bass and shad don’t want any part of it. To find more suitable conditions, however, they don’t always have to travel far.

“Before your area starts experiencing those August cold fronts, spend some time locating big gravel flats where two river channels intersect,” Bohannan said. “The bass will sit on the edges of these drops for much of the summer, but they’ll slide up and relocate on these flats in the late-summer. These areas don’t always host numbers of bass, but you can catch some absolute giants on them.”

“The fish are breaking up and getting harder to locate, but that doesn’t mean you can’t have an incredible day on the water. Keeping it simple and targeting high-percentage areas is absolutely essential this time of year.”

Electronics are your friend—To find the isolated bass known to inhabit these areas, Bohannan carefully idles the break lines with his Humminbird Side Imaging. He sets his range to 100 feet on each side to scan the area quickly, but he’s not necessarily looking for big schools. Just a few arches on his screen are enough to warrant further investigation.Strolling—“Strolling a football jig is one of the best ways to efficiently cover these areas and get some huge bites,” Bohannan said. “I’ll make a long cast with a 3/4-ounce Bass-X Beaver Craw Football Jig and let the wind drift both my jig and boat over the flat. You’ll feel it bouncing around the bottom and all of the sudden you’ll feel a big thump when one bites. Now remember, you’re probably targeting isolated fish, so you may have to drift over the flat several times before you get a bite.”Spoon ’em— “If you can’t get them to eat a football jig, don’t be afraid to drop a 3/4-ounce War Eagle spoon on top of them,” Bohannan said. “I’ll put my boat over the fish, drop it directly in front of their nose and give it two or three big hops. This can be a great way to get a few bonus bites on tough days.”

While many late-summer transition areas may take a fair amount of searching and experimentation to find, dissecting main lake docks is one of the quickest ways to catch numbers of quality “in-between” bass this time of year. While the hot conditions may tempt you to focus your efforts on the deeper parts of them, Bohannan has a lot of success going against the grain.

“This is an excellent time to get on a really solid dock bite,” Bohannan said. “The most consistent action seems to happen whenever you target the shallowest part of the dock such as the back posts. I start by making repetitive pitches with a Gambler Ugly Otter while paying close attention to my depth. When I start getting a few bites, this can be a very easy deal to pattern by targeting docks in similar depth zones.”

They may be suspended—“If you can’t get bit flipping and pitching the back sides of these docks, don’t assume the fish aren’t there,” Bohannan said. “They like to suspend in these same areas in the late-summer, so I always swim a white Bass-X Swim Jig next to the docks before I make a move.”Wood seems to be better—“You can certainly catch some on metal poles, but wooden docks attract more algae, resulting in a more prominent baitfish population,” Bohannan said. “Any foam located around these docks can also be very productive for the same reasons.”The uglier, the better—“I always look for old, decrepit docks,” Bohannan said. “These docks will often have trash hanging off the sides or brush piles in front. Prettier, newer docks tend to be a lot cleaner with less cover on which bass can position.” 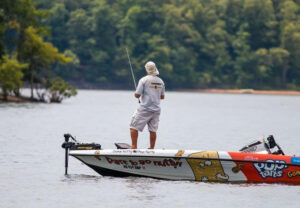 Throughout his years of experience on deep highland impoundments, Bohannan has done a lot of damage targeting long, flat points with walking topwater lures. The bass may be scattered on these points but big topwaters are an excellent way to call ‘em up from astounding depths.

“I like to take a Heddon Super Spook and cover as much of the point as I possibly can,” Bohannan said. “They won’t always be on a particular spot, so I usually start on the ends of these points and work my way shallower. When you find them, it’s some of the most fun fishing of the entire year.”

Use the fastest reel you can! Bohannan uses a 7.1:1 Ardent Apex Elite Casting Reel when fishing points with topwater lures. The fish will often bite at the end of a long cast and the ability to put constant pressure on them is very important.

Clear water is best—“If your favorite fishery has clear water, don’t underestimate the power of topwater lures—even in the middle of the day,” Bohannan said. “Even if the fish are on the very end of a point in 30 feet of water, they won’t hesitate to hammer your topwater lure.”Look for isolated cover—“Isolated cover makes a world of difference when you’re fishing these points,” Bohannan said. “Even if it’s just a few scattered stumps, rocks or a single brush pile, it will concentrate the fish in a given area. When I get to the shallow part of the point, I use my Typhoon sunglasses to look for something—anything—that can potentially hold a bass.” 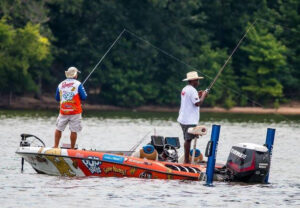 Area #4: Saturate flats in the backs of major creeks

Although many anglers don’t even consider targeting the back flats of major creeks until full-blown autumn weather arrives, this technique is responsible for some of Bohannan’s best days of late-summer fishing. Bass make this transition much earlier than you’d think, so it’s not uncommon to have all the action to yourself.

Be prepared—“This can be a really random occurrence sometimes, so it’s important to be ready to capitalize at any given moment,” Bohannan said. “I always have a 1/2-ounce War Eagle Screamin Eagle Spinnerbait, a topwater lure and a squarebill on my deck and ready at all times. They’ll just start blowing up in the middle of the day sometimes and you don’t want to waste any time getting a bait in there.”Use smaller profile lures—“The majority of the bait these bass are focused on are relatively small threadfin shad,” Bohannan said. “If you throw a huge crankbait or spinnerbait out there, the bass are going to know something isn’t right. We always preach about matching the hatch and this is when it starts to get very essential.”Ambush points—“When you’re looking for these flats, make an effort to find some with plenty of ambush points like shallow brush, standing timber or stumps,” Bohannan said. “This will help you pinpoint the bass because they’ll position near the cover and wait for unsuspecting shad to swim by.”

If you use this late-summer transition period wisely, you’ll be able to learn a lot about your fishery and bass biology. The next time you get out there, take some time to find areas similar to Bohannan’s favorites. You never know what can happen when you cover enough water.